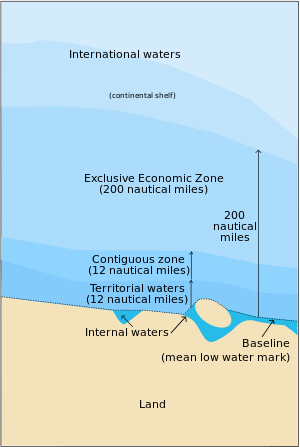 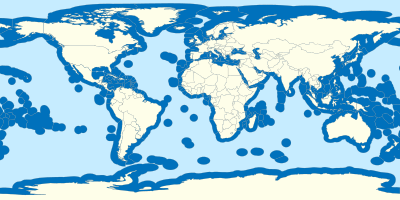 The World's EEZs, shown as a white extension of land territory

Generally, a state's exclusive economic zone is an area beyond and adjacent to the territorial sea, extending seaward to a distance of no more than 200 nmi (370 kم) out from its coastal baseline. The exception to this rule occurs when exclusive economic zones would overlap; that is, state coastal baselines are less than 400 nmi (740 kم) apart. When an overlap occurs, it is up to the states to delineate the actual maritime boundary.[2] Generally, any point within an overlapping area defaults to the nearest state.[3]

The idea of allotting nations EEZs to give them more control of maritime affairs outside territorial limits gained acceptance in the late 20th century.

Initially, a country's sovereign territorial waters extended 3 nmi or 5.6 kم (range of cannon shot) beyond the shore. In modern times, a country's sovereign territorial waters extend to 12 nmi (22 kم) beyond the shore. One of the first assertions of exclusive jurisdiction beyond the traditional territorial seas was made by the الولايات المتحدة in the Truman Proclamation of September 28, 1945. However, it was Chile and Peru respectively that first claimed maritime zones of 200 nautical miles with the Presidential Declaration Concerning Continental Shelf of 23 June 1947 (El Mercurio, Santiago de Chile, 29 June 1947) and Presidential Decree No. 781 of 1 August 1947 (El Peruano: Diario Oficial [ك‍]. Vol. 107, No. 1983, 11 August 1947).[5]

It was not until 1982 with the UN Convention on the Law of the Sea that the 200 nautical mile exclusive economic zone was formally adopted.

The exact extent of exclusive economic zones is a common source of conflicts between states over marine waters.

Regions where a permanent ice shelf extends beyond the coastline are also a source of potential dispute.[33]

Fisheries management, usually adhering to guidelines set by the FAO, provides significant practical mechanisms for the control of EEZs. Transboundary fish stocks are an important concept in this control.[37] Transboundary stocks are fish stocks that range in the EEZs of at least two countries. Straddling stocks, on the other hand, range both within an EEZ as well as in the high seas, outside any EEZ. A stock can be both transboundary and straddling.[38]

Australia's Exclusive Economic Zone was declared on 1 August 1994, and extends from 12 nautical miles to 200 nautical miles (370 km) from the coastline of Australia and its external territories, except where a maritime delimitation agreement exists with another state.[39][40] To the 12 nautical miles boundary is Australia's territorial waters. Australia has the third largest exclusive economic zone, behind France and the United States, but ahead of Russia, with the total area of 8,148,250 square kilometres, which actually exceeds its land territory.

In 2004, the country submitted its claims to the United Nations Commission on the Limits of the Continental Shelf (CLCS) to extend its maritime continental margin.[45]

Canada is unusual in that its exclusive economic zone, covering 5,599,077 kم2 (6.026796×1013 قدم2), is slightly smaller than its territorial waters.[46] The latter generally extend only 12 nautical miles from the shore, but also include inland marine waters such as Hudson Bay (about 300 ميل بحريs (560 kم; 350 ميل) across), the Gulf of Saint Lawrence and the internal waters of the Arctic archipelago.

The first figure excludes all disputed waters, while the last figure indicates China's claimed boundaries, and does not take into account neighboring powers' claims.

Exclusive economic zone between Israel and Cyprus as signed in Nicosia. (Labels in Hebrew.)

The Exclusive Economic Zone of Cyprus covers more than 70,000 km2 and is divided between 13 exploration blocks. The process of the establishment of Cyprus, Israel and Lebanon Exclusive Economic Zones was held in Nicosia in 2010 with separate meetings between each country.[48] Cyprus and Israel as part of their wider cooperation have agreed to start their gas explorations with a common American company, specifically Noble Energy. Cypriot and Israeli governments are discussing to export their natural gas through the shipping of compressed Natural Gas to Greece and then to the rest of Europe or through a subsea Pipelines starting from Israel and then leading to Greece via Cyprus.[49][50]

Greece has claimed an exclusive economic zone, as it is entitled to do so, as per UNCLOS 1982 as well as customary international law.[52]

According to published maps, the Israel government has recognized the Exclusive Economic Zones (EEZ) of Greece and Cyprus. They describe the course of the gas pipeline which will transfer gas produced by American Νoble Εnergy Ltd. from the Leviathan reservoir to Europe, through an undersea pipeline crossing Greece. The gas pipeline should traverse the sea area, which according to international law, is part of the Greek EEZ. By this proposal, Israel recognizes the Greek EEZ in the area and offers an advantage that Greece can use during negotiation procedures to support its claims on the area. In practice, this cooperation will set up a powerful energy coalition between Greece, Cyprus and Israel. The mining and operating part will be undertaken by an American company.[53] "The substance of the issue is that in an effort to protect and secure vital Israeli interests in the Mediterranean Sea, Israel has been left with no choice other than to officially delimit its maritime borders".[54]

India is currently seeking to extend its EEZ to 350 miles.[55]

In 2010, an agreement was signed with Cyprus concerning the limit of territorial waters between Israel and Cyprus at the maritime halfway point, a clarification essential for safeguarding Israel's rights to oil and underwater gas reservoirs. The agreement was signed in Nicosia by Israeli Infrastructure Minister Uzi Landau and the Cypriot Foreign Minister Markos Kyprianou. The two countries agreed to cooperate in the development of any cross border resources discovered, and to negotiate an agreement on dividing joint resources.

Japan has disputes over its EEZ boundaries with all its Asian neighbors (Russia, Republic of Korea, China and Taiwan). The above, and relevant maps at the Sea Around Us Project[57][58] both indicate Japan's claimed boundaries, and do not take into account neighboring powers' claims.

Japan also refers to various categories of "shipping area" – Smooth Water Area, Coasting Area, Major or Greater Coasting Area, Ocean Going Area – but it is unclear whether these are intended to have any territorial or economic implications.

Mexico's exclusive economic zones comprise a total surface area of 3,144,295 km2, and places Mexico among the countries with the largest areas in the world.[59] This puts Mexico's total territory as 5,153,735 km2.

New Zealand's EEZ covers 4,083,744 kم2 (4.395705×1013 قدم2),[60][61] which is approximately fifteen times the land area of the country. Sources vary significantly on the size of New Zealand's EEZ; for example, a recent government publication gave the area as roughly 4,300,000 km2.[62] These figures are for the EEZ of New Zealand proper, and do not include the EEZs of other territories in the Realm of New Zealand (Tokelau, Niue, the Cook Islands and the Ross Dependency).

The exclusive economic zone of North Korea stretches 200 nautical miles from its basepoints in both the West Sea (Yellow Sea) and the Sea of Japan.[63] The EEZ was declared in 1977 after North Korea had contested the validity of the Northern Limit Lines (NLL) set up after the Korean War as maritime borders.[64] The EEZ has not been codified in law and North Korea has never specified its coordinates, making it difficult to determine its specific scope.[65]

In the West Sea, the EEZ remains unspecified in the Korean Bay because China has not determined its own EEZ in the area.[66] The border between the North Korean and South Korean EEZs in the West Sea cannot be determined because of potential overlap and disputes over certain islands.[67]

In the Sea of Japan, the North Korean EEZ can be approximated to be trapezoidal-shaped.[68] The border between North Korea and Russia's respective EEZs is the only such border that has been determined in East Asia.[69] Here, the EEZ does not cause many problems, even with regards to South Korea, because the sea is not thought to be rich in resources.[68]

Norway has a large exclusive economic zone of 819 620 km2 around its coast. The country has a fishing zone of 1,878,953 km2, including fishing zones around Svalbard and Jan Mayen.[70]

In April 2009, the United Nations Commission for the Limits of the Continental Shelf approved Norway's claim to an additional 235,000 square kilometres of continental shelf. The commission found that Norway and Russia both had valid claims over a portion of shelf in the Barents Sea.[71]

Portugal has the 20th largest EEZ in the world. Presently, it is divided in three non-contiguous sub-zones:

Portugal submitted a claim to extend its jurisdiction over additional 2.15 million square kilometers of the neighboring continental shelf in May 2009,[75] resulting in an area with a total of more than 3,877,408 km2. The submission, as well as a detailed map, can be found in the Task Group for the extension of the Continental Shelf website.

Spain disputes the EEZ's southern border, maintaining that it should be drawn halfway between Madeira and the Canary Islands. But Portugal exercises sovereignty over the Savage Islands, a small archipelago north of the Canaries, claiming an EEZ border further south. Spain objects, arguing that the Savage Islands do not have a separate continental shelf,[76] citing article 121 of the United Nations Convention on the Law of the Sea.[77]

South Africa's EEZ includes both that next to the African mainland and that around the Prince Edward Islands, totalling 1,535,538 km2.[79]

The exclusive economic zones of the United Kingdom in blue, including the British Overseas Territories and the Crown Dependencies. The British claim in Antarctica is shown in shaded blue.[80]
British Isles EEZ

The UK was late to establish an EEZ, relying on overlapping maritime zones for fisheries, pollution control, and energy matters. The Marine and Coastal Access Act 2009 gave the powers to establish an EEZ, with the zone defined by The Exclusive Economic Zone Order 2013 which came into force on 31 March 2014.[82][83]

†Part of the overseas territory of Saint Helena, Ascension and Tristan da Cunha, which together has an EEZ of 1,641,294 square km.

Exclusive economic zones of the United States, including insular areas

The United States' exclusive economic zone is the largest in the world, covering 11,351,000 km2. Areas of its EEZ are located in three oceans, the Gulf of Mexico, and the Caribbean Sea.

The sizes of the components of the US EEZ/territorial seas are (in decreasing size):[84]

Vietnam has an exclusive economic zone of 417,663 kم2 (161,261 ميل2). It includes the Paracel Islands and Spratley Islands. It has disputes mainly with الصين due to the Nine-Dash Line.

This list includes dependent territories within their sovereign states (including uninhabited territories), but does not include claims on Antarctica. EEZ+TIA is exclusive economic zone (EEZ) plus total internal area (TIA) which includes land and internal waters.