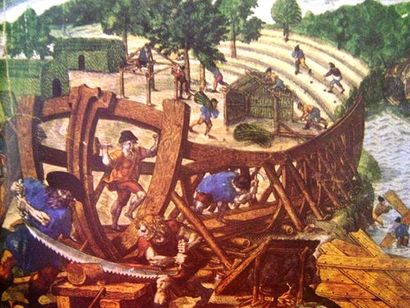 A two-masted Chinese junk, from the Tiangong Kaiwu of Song Yingxing, published in 1637

Illustration of some shipbuilding methods in England, 1858
Babbitt's rotary engine

MS Oasis of the Seas, the third largest passenger ship in the world, under construction at the Turku shipyard that was taken over by Meyer Werft in 2014
A TI-class supertanker built by Daewoo Shipbuilding & Marine Engineering in Okpo-dong, South Korea.

Modern shipbuilding makes considerable use of prefabricated sections. Entire multi-deck segments of the hull or superstructure will be built elsewhere in the yard, transported to the building dock or slipway, then lifted into place. This is known as "block construction". The most modern shipyards pre-install equipment, pipes, electrical cables, and any other components within the blocks, to minimize the effort needed to assemble or install components deep within the hull once it is welded together.

Ship design work, also called naval architecture, may be conducted using a ship model basin. Previously, loftsmen at the mould lofts of shipyards were responsible for taking the dimensions, and details from drawings and plans and translating this information into templates, battens, ordinates, cutting sketches, profiles, margins and other data.[3] However, since the early 1970s computer-aided design (CAD) became normal for the shipbuilding design and lofting process.[4]

Modern ships, since roughly 1940, have been produced almost exclusively of welded steel. Early welded steel ships used steels with inadequate fracture toughness, which resulted in some ships suffering catastrophic brittle fracture structural cracks (see problems of the Liberty ship). Since roughly 1950, specialized steels such as ABS Steels with good properties for ship construction have been used. Although it is commonly accepted that modern steel has eliminated brittle fracture in ships, some controversy still exists.[5] Brittle fracture of modern vessels continues to occur from time to time because grade A and grade B steel of unknown toughness or fracture appearance transition temperature (FATT) in ships' side shells can be less than adequate for all ambient conditions.[6]

All ships need repair work at some point in their working lives. A part of these jobs must be carried out under the supervision of the classification society.

Prior to undergoing repairs, a tanker must dock at a deballasting station for completing the tank cleaning operations and pumping ashore its slops (dirty cleaning water and hydrocarbon residues).