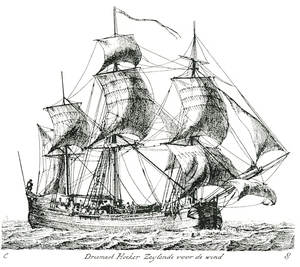 The Spanish government in Madrid under Prime Minister Jerónimo Grimaldi and his closest adviser Leopoldo de Gregorio, Marqués de Esquilache , banned their citizens on March 10 as part of a radical reform program to wear the round, broad-brimmed hat ( sombrero redondo ) and long coat. 13 days later on Palm Sunday, public discontent triggers the Madrid Hat Rebellion , which spreads rapidly from Madrid to the whole country. King Carlos III. flee to Aranjuez and leave the government to the moderate minister on reformPedro Pablo Abarca de Bolea, conde de Aranda . He orders the suppression of the uprising by military means, but the troops can not restore the authority of state power. It is only thanks to the intervention of two Jesuits that the rebels yield to smaller concessions and the dismissal of de Esquilache. The Marqués leaves the country via Cartagena and embarks for Naples. The Jesuit order , which has contributed significantly to the containment of the uprising, is then suspected of any evidence as a mastermind responsible for it.

In the Siamese-Burmese War begins with around 50,000 men the siege of the Thai capital Ayutthaya by the Burmese ruler Hsinbyushin from the Konbaung dynasty . King Ekathat offers the surrender, but Hsinbyushin wants the complete annihilation of the kingdom Ayutthaya . On the 20th of JanuaryThe Siamese make a failure with about the same number of troops, but their vanguard is so panic-stricken by a volley of muskets that they flee back into their own ranks. Thousands of Siamese are killed by the resurgent Burmese. Siam tries to relieve some 10,000 men, but the Burmese hold their positions.

In December, the Siamese are making a final effort to break the Burmese siege by using gunboats to attack Burma's submerged entrenchments. They are repulsed again with great losses. Phaya Taksin withdraws from the capital with around 500 soldiers to build a new army in the east of the country.