التقويم البيزنطي، وأيضاً "Creation Era of Constantinople," or "Era of the World" (باليونانية: Έτη Γενέσεως Κόσμου κατά 'Ρωμαίους ,[1] also Έτος Κτίσεως Κόσμου or Έτος Κόσμου ) was the Calendar officially used by the Eastern Orthodox Church from ca. AD 691 to 1728 in the Ecumenical Patriarchate, by the الامبراطورية البيزنطية[note 1] from AD 988 to 1453, and in Russia from ca. AD 988 to 1700. Derived from the Septuagint version of the Bible, it placed the date of creation at 5,509 years before the Incarnation, and was characterized by a certain tendency which had already been a tradition amongst Hebrews and Jews to number the years from the foundation of the world. (باللاتينية: Annus Mundi /‘Ab Origine Mundi’ (AM)).[note 2] Its year one, the supposed date of creation, was September 1, 5509 BC to August 31, 5508 BC. 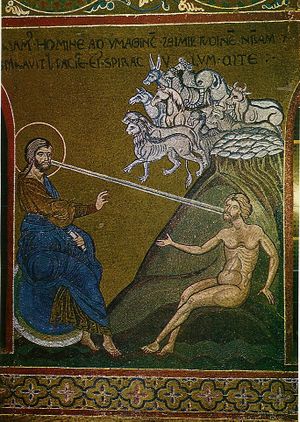 Byzantine mosaic of the Creation of Adam, (Monreale Cathedral).

The "Alexandrian Era" (باليونانية: Κοσμου ετη κατ’ Αλεξανδρεις ) developed in AD 412, was the precursor to the Byzantine Era. After the initial attempts by Hippolytus, Clement of Alexandria and others[note 3], the Alexandrian computation of the date of creation was worked out to be 25 March 5493 BC.[2].

The Alexandrine monk Panodoros reckoned 5904 years from Adam to the year AD 412. His years began with August 29, corresponding to the First of Thoth, or the Egyptian new year.[3] Bishop Annianos of Alexandria however, preferred the Annunciation style as New Year's Day, the 25th of March, and shifted the Panodoros era by about six months, to begin on 25 March. This created the Alexandrian Era, whose first day was the first day of the proleptic[note 4] Alexandrian civil year in progress, 29 August, 5493 BC, with the ecclesiatical year beginning on 25 March, 5493 BC.

This system presents in a masterly sort of way the mystical coincidence of the three main dates of the world's history: the beginning of Creation, the Incarnation, and the Resurrection of Christ. All these events happened, according to the Alexandrian chronology, on the 25th of March; furthermore, the first two events were separated by the period of exactly 5500 years; the first and the third one occurred on Sunday — the sacred day of the beginning of the Creation and its renovation through Christ[4]

Dionysius of Alexandria had earlier emphatically quoted mystical justifications for the choice of March 25 as the start of the year:

March 25 was considered to be the anniversary of Creation itself. It was the first day of the year in the medieval Julian calendar and the nominal vernal equinox (it had been the actual equinox at the time when the Julian calendar was originally designed). Considering that Christ was conceived at that date turned March 25 into the Feast of the Annunciation which had to be followed, nine months later, by the celebration of the birth of Christ, Christmas, on December 25.

The Alexandrian Era of March 25 5493 BC was adopted by church fathers such as Maximus the Confessor and Theophanes the Confessor, as well as chroniclers such as George Syncellus. Its striking mysticism made it popular in Byzantium especially in monastic circles. However this masterpiece of Christian symbolism had two serious weak points: historical inaccuracy surrounding the date of Resurrection as determined by its Easter computus,[note 5] and its contradiction to the chronology of the Gospel of St John regarding the date of the Crucifixion on Friday after the Passover.[4]

Principal considerations for the Byzantine calendar