A chart of nuclides. Above, cut into three parts for better presentation; below, combined. 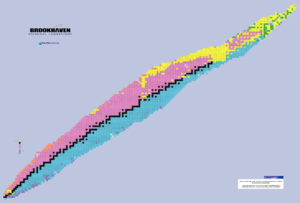 A chart or table of nuclides is a simple map to the nuclear, or radioactive, behaviour of nuclides, as it distinguishes the isotopes of an element. It contrasts with a periodic table, which only maps their chemical behavior, since isotopes (nuclides which are variants of the same element) do not differ chemically. Nuclide charts organize nuclides along the X axis by their numbers of neutrons and along the Y axis by their numbers of protons, out to the limits of the neutron and proton drip lines. This representation was first published by Giorgio Fea in 1935,[1] and expanded by Emilio Segrè in 1945 or G. Seaborg. In 1958, Walter Seelmann-Eggebert and Gerda Pfennig published the first edition of the Karlsruhe Nuclide Chart. Its 7th edition was made available in 2006. Today, there are several nuclide charts, four of which have a wide distribution: the Karlsruhe Nuclide Chart, the Strasbourg Universal Nuclide Chart, the Chart of the Nuclides from the JAEA and the Nuclide Chart from Knolls Atomic Power Laboratory.[2] It has become a basic tool of the nuclear community.

جدول النيوكليدات، أدناه، يبين نيوكليدات (often loosely called "isotopes", but this term properly refers to nuclides with the same atomic number, see below), including all with half-life of at least one day.[3] They are arranged with increasing atomic numbers from left to right and increasing neutron numbers from top to bottom. 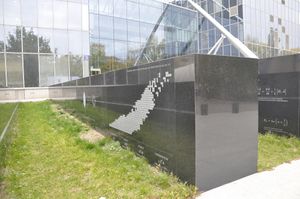 Fragment of table of nuclides for polonium, radium, copernicium and curium, as seen on a monument in front of University of Warsaw's Centre of New Technologies 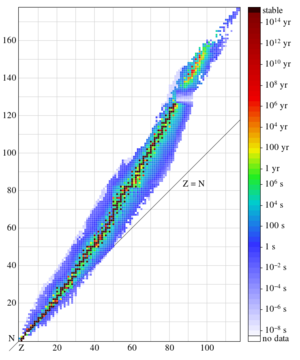