استمع) (ألمانية: Gdingencode: de is deprecated , قالب:Lang-csb) is a city in the Pomeranian Voivodeship of Poland and a seaport of Gdańsk Bay on the south coast of the Baltic Sea. Located in Kashubia in Eastern Pomerania, Gdynia is part of a conurbation with the spa town of Sopot, the city of Gdańsk and suburban communities, which together form a metropolitan area called the Tricity (Trójmiasto), with a population of over a million people. 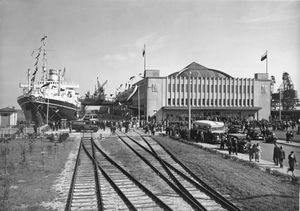 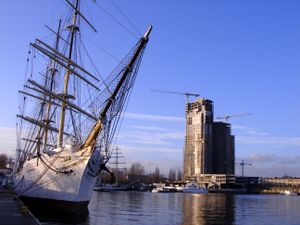 View from Kosciuszko Square; Dar Pomorza on the left, Sea Towers on the right

For centuries, Gdynia remained a small farming and fishing village on the Baltic coast. At the beginning of the 20th-century Gdynia became a seaside resort town and experienced an inflow of tourists. This triggered an increase in local population. After Poland regained its independence in 1918, a decision was made to construct a Polish seaport in Gdynia, between the Free City of Danzig (a semi-autonomous city-state under joint League of Nations and Polish administration) and German Pomerania, making Gdynia the primary economic hub of the Polish Corridor. It was then that the town was given a more cosmopolitan character with modernism being the dominant architectural style and emerged as a city in 1926.

The rapid development of Gdynia was interrupted by the outbreak of World War II. The German troops refrained from deliberate bombing. The newly built port and shipyard were completely destroyed during the war.[1] The population of the city suffered much heavier losses as most of the inhabitants were evicted and expelled. The locals were either displaced to other regions of occupied Poland or sent to Nazi concentration camps throughout Europe. After the war, Gdynia was settled with the former inhabitants of Warsaw and lost cities such as Lviv and Vilnius in the Eastern Borderlands. The city was gradually regenerating itself with its shipyard being rebuilt and expanded. In December 1970 the shipyard workers protest against the increase of prices was bloodily repressed. This greatly contributed to the rise of the Solidarity movement in Gdańsk.

Today the port of Gdynia is a regular stopover on the itinerary of luxurious passenger ships and a new ferry terminal with a civil airport are under realisation. The city won numerous awards in relation to safety, infrastructure, quality of life and a rich variety of tourist attractions. In 2013 Gdynia was ranked as Poland's best city to live in and topped the rankings in the overarching category of general quality of life.[2] Gdynia is also highly noted for its access to education. There are prestigious universities such as the Polish Naval Academy nearby.

Gdynia hosts the Gdynia Film Festival, the main Polish film festival, and was the venue for the International Random Film Festival in 2014.

Gdynia is twinned with:[4]