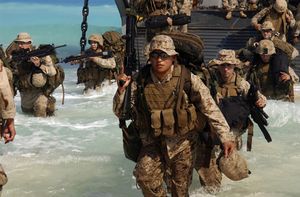 Continental Marines land at New Providence during the Battle of Nassau.

The United States Marine Corps traces its roots to the Continental Marines of the American Revolutionary War, formed by Captain Samuel Nicholas by a resolution of the Second Continental Congress on 10 November 1775, to raise two battalions of Marines. That date is regarded and celebrated as the date of the Marine Corps' birthday. At the end of the American Revolution, both the Continental Navy and Continental Marines were disbanded in April 1783. The institution itself would not be resurrected until 11 July 1798. At that time, in preparation for the Quasi-War with France, Congress created the United States Marine Corps.[7] Marines had been enlisted by the War Department as early as August 1797[8] for service in the new-build frigates authorized by the Congressional "Act to provide a Naval Armament" of 18 March 1794,[9] which specified the numbers of Marines to recruit for each frigate.

The Marines' most famous action of this period occurred during the First Barbary War (1801–1805) against the Barbary pirates,[10] when William Eaton and First Lieutenant Presley O'Bannon led eight Marines and 500 mercenaries in an effort to capture Tripoli. Though they only reached Derna, the action at Tripoli has been immortalized in the Marines' hymn and the Mameluke sword carried by Marine officers.[11]

During the War of 1812, Marine detachments on Navy ships took part in some of the great frigate duels that characterized the war, which were the first and last engagements of the conflict. Their most significant contribution, however, was holding the center of General Jackson's defensive line at the Battle of New Orleans, the final major battle and one of the most one-sided engagements of the war. With widespread news of the battle and the capture of HMS Cyane, HMS Levant and HMS Penguin, the final engagements between British and American forces, the Marines had gained a reputation as expert marksmen, especially in defensive and ship-to-ship actions.[11]

After the war, the Marine Corps fell into a malaise that ended with the appointment of Archibald Henderson as its fifth Commandant in 1820. Under his tenure, the Corps took on expeditionary duties in the Caribbean, the Gulf of Mexico, Key West, West Africa, the Falkland Islands, and Sumatra. Commandant Henderson is credited with thwarting President Jackson's attempts to combine and integrate the Marine Corps with the Army.[11] Instead, Congress passed the Act for the Better Organization of the Marine Corps in 1834, stipulating that the Corps was part of the Department of the Navy as a sister service to the Navy.[12] This would be the first of many times that the independent existence of the Corps was challenged.

U.S. Marines storming Chapultepec castle under a large American flag, paving the way for the fall of Mexico City.

Commandant Henderson volunteered the Marines for service in the Seminole Wars of 1835, personally leading nearly half of the entire Corps (two battalions) to war. A decade later, in the Mexican–American War (1846–1848), the Marines made their famed assault on Chapultepec Palace in Mexico City, which would be later celebrated as the "Halls of Montezuma" in the Marines' hymn. In the 1850s, the Marines would see further service in Panama and Asia, attached to Matthew Perry's East India Squadron on its historic trip to the Far East.[13]

Five Marine privates with fixed bayonets, and their NCO with his sword at the Washington Navy Yard, 1864.

The Marine Corps played a small role in the Civil War (1861–1865); their most prominent task was blockade duty. As more and more states seceded from the Union, about a third of the Corps' officers left the United States to join the Confederacy and form the Confederate States Marine Corps, which ultimately played little part in the war. The battalion of recruits formed for the First Battle of Bull Run (First Manassas) performed poorly, retreating with the rest of the Union forces.[14] Blockade duty included sea-based amphibious operations to secure forward bases. In late November 1861, Marines and sailors landed a reconnaissance in force from the يوإس‌إس Flag at Tybee Island, Georgia, to occupy the Lighthouse and Martello Tower on the northern end of the island. It would later be the Army base for bombardment of Fort Pulaski.[15]

Warrant Officers are primarily former enlisted experts in a specific specialized field, and provide leadership generally only within that speciality.

Every year, over 2,000 new Marine officers are commissioned, and 38,000 recruits accepted and trained.[14] All new Marines, enlisted or officer, are recruited by the Marine Corps Recruiting Command.

As in any military organization, the official and unofficial traditions of the Marine Corps serve to reinforce camaraderie and set the service apart from others. The Corps' embrace of its rich culture and history is cited as a reason for its high esprit de corps.[16]

Eagle, Globe and Anchor along with the US flag, the Marine Corps flag and the Commandant's flag

A recruiting poster makes use of the "Teufel Hunden" nickname.

The basic infantry weapon of the Marine Corps is the M16 assault rifle family, with a majority of Marines being equipped with the M16A2 or M16A4 service rifles (the M16A2 is being phased out). The M4 carbine, a compact variant of the M16, has also been issued.[17] The standard side arm is the M9 pistol. Suppressive fire is provided by the M249 SAW and M240 machine guns, at the squad and company levels respectively. In addition, indirect fire is provided by the M203 grenade launcher in fireteams, M224 60 mm mortar in companies, and M252 81 mm mortar in battalions. The M2 .50 caliber heavy machine gun and MK19 automatic grenade launcher (40 mm) are available for use by dismounted infantry, though they are more commonly vehicle-mounted. Precision firepower is provided by the M40 sniper rifle and M82 anti-materiel rifle by Scout Snipers, while designated marksmen use the DMR (being replaced by the M39 EMR), and the SAM-R.[18]

This article incorporates public domain material from websites or documents of the United States Marine Corps.