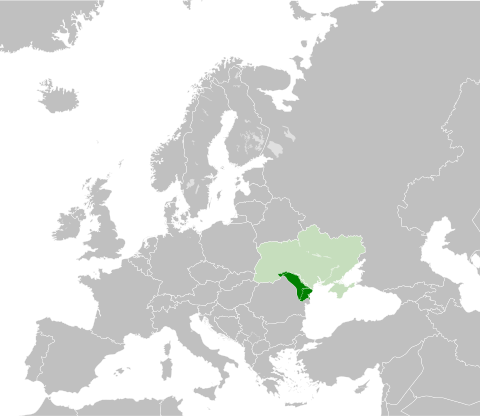 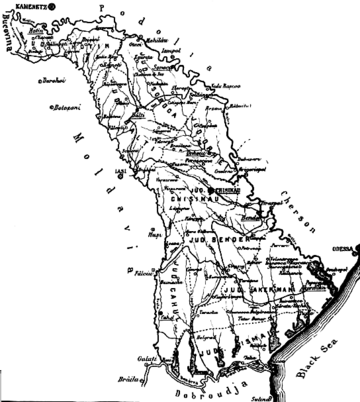 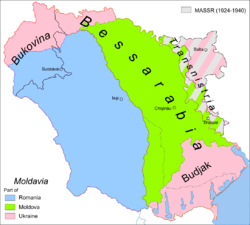 In the late 14th century, the newly established Principality of Moldavia encompassed what later became known as Bessarabia. Afterward, this territory was directly or indirectly, partly or wholly controlled by: the Ottoman Empire (as suzerain of Moldavia, with direct rule only in Budjak and Khotyn), Russian Empire, Romania, the USSR. Since 1991, most of the territory forms the core of Moldova, with smaller parts in Ukraine.

People have inhabited the territory of Bessarabia for thousands of years. Cucuteni–Trypillia culture flourished between the 6th and 3rd millennium BC.

In Antiquity the region was inhabited by Thracians, as well as for shorter periods by Cimmerians, Scythians, Sarmatians, and Celts, specifically by tribes such as the Costoboci, Carpi, Britogali, Tyragetae, and Bastarnae.[2] In the 6th century BC, Greek settlers established the colony of Tyras along the Black Sea coast and traded with the locals. Celts also settled in the southern parts of Bessarabia, their main city being Aliobrix.

The first polity that is believed to have included the whole of Bessarabia was the Dacian polity of Burebista in the 1st century BC. After his death, the polity was divided into smaller pieces, and the central parts were unified in the Dacian kingdom of Decebalus in the 1st century AD. This kingdom was defeated by the Roman Empire in 106. Southern Bessarabia was included in the empire even before that, in 57 AD, as part of the Roman province Moesia Inferior, but it was secured only when the Dacian Kingdom was defeated in 106. The Romans built defensive earthen walls in Southern Bessarabia (e.g. Lower Trajan Wall) to defend the Scythia Minor province against invasions. Except for the Black Sea shore in the south, Bessarabia remained outside direct Roman control; the myriad of tribes there are called by modern historians Free Dacians.[3] The 2nd to the 5th centuries also saw the development of the Chernyakhov culture.

In 270, the Roman authorities began to withdraw their forces south of the Danube, especially from the Roman Dacia, due to the invading Goths and Carpi. The Goths, a Germanic tribe, poured into the Roman Empire from the lower Dniepr River, through the southern part of Bessarabia (Budjak steppe), which due to its geographic position and characteristics (mainly steppe), was swept by various nomadic tribes for many centuries. In 378, the area was overrun by the Huns.

المقالة الرئيسية: Moldavia in the Middle Ages، وRomania in the Early Middle Ages، و Origin of the Romanians
According to one theory, the region's name originated from the Wallachian rule during the late 14th century (1390 map).

From the 3rd century until the 11th century, the region was invaded numerous times in turn by different tribes: Goths, Huns, Avars, Bulgars, Magyars, Pechenegs, Cumans and Mongols. The territory of Bessarabia was encompassed in dozens of ephemeral kingdoms which were disbanded when another wave of migrants arrived. Those centuries were characterized by a terrible state of insecurity and mass movement of these tribes. The period was later known as the Dark Ages of Europe, or age of migrations.

In 561, the Avars captured Bessarabia and executed the local ruler Mesamer. Following the Avars, Slavs arrived in the region and established settlements. Then, in 582, Onogur Bulgars settled in southeastern Bessarabia and northern Dobruja, from which they moved to Moesia Inferior (allegedly under pressure from the Khazars), and formed the nascent region of Bulgaria. With the rise of the Khazars' state in the east, the invasions began to diminish and it was possible to create larger states. According to some opinions, the southern part of Bessarabia remained under the influence of the First Bulgarian Empire until the end of the 9th century.

Between the 8th and 10th centuries, the southern part of Bessarabia was inhabited by people from the Balkan-Danubian culture[4] (the culture of the First Bulgarian Empire). Between the 9th and 13th centuries, Bessarabia is mentioned in Slav chronicles as part of Bolohoveni (north) and Brodnici (south) voivodeships, believed[ممن؟] to be Vlach principalities of the early Middle Ages.

The last large-scale invasions were those of the Mongols of 1241, 1290, and 1343. Sehr al-Jedid (near Orhei), an important settlement of the Golden Horde, dates from this period. They led to a retreat of a big part of the population to the mountainous areas in Eastern Carpathians and to Transylvania. The population east of Prut became especially low at the time of the Tatar invasions.

In the Late Middle Age, chronicles mention a Tigheci "republic", predating the establishment of the Principality of Moldavia, situated near the modern town of Cahul in the southwest of Bessarabia, preserving its autonomy even during the later Principality even into the 18th century. Genovese merchants rebuilt or established a number of forts along the Dniester (notably Moncastro) and Danube (including Kyliya/Chilia-Licostomo).[بحاجة لمصدر]

After the 1360s the region was gradually included in the principality of Moldavia, which by 1392 established control over the fortresses of Akkerman and Chilia, its eastern border becoming the River Dniester. Based on the name of the region, some authors consider that in the latter part of the 14th century the southern part of the region was under the rule of Wallachia (the ruling dynasty of Wallachia during that period was called Basarab). In the 15th century, the entire region was a part of the principality of Moldavia. Stephen the Great ruled between 1457 and 1504, a period of nearly 50 years during which he won 32 battles defending his country against virtually all his neighbours (mainly the Ottomans and the Tatars, but also the Hungarians and the Poles) while losing only two. During this period, after each victory, he raised a monastery or a church close to the battlefield honoring Christianity. Many of these battlefields and churches, as well as old fortresses, are situated in Bessarabia (mainly along Dniester).[بحاجة لمصدر]

Akkerman fortress in Bilhorod-Dnistrovskyi, Ukraine) was one of the many important castles in Bessarabia.

In 1484, the Turks invaded and captured Chilia and Cetatea Albă (Akkerman in Turkish), and annexed the shoreline southern part of Bessarabia, which was then divided into two sanjaks (districts) of the Ottoman Empire. In 1538, the Ottomans annexed more Bessarabian land in the south as far as Tighina, while the central and northern Bessarabia remained part of the Principality of Moldavia (which became a vassal of the Ottoman Empire). Between 1711 and 1812, the Russian Empire occupied the region five times during its wars against the Ottoman and Austrian Empires.[بحاجة لمصدر]

By the Treaty of Bucharest of May 28, 1812—concluding the Russo-Turkish War of 1806-1812—the Ottoman Empire ceded the land between the Pruth and the Dniester, including both Moldavian and Turkish territories, to the Russian Empire. That entire region was then called Bessarabia.[5]

In 1814, the first German settlers arrived and mainly settled in the southern parts, and Bessarabian Bulgarians began settling in the region too, founding towns such as Bolhrad. Between 1812 and 1846, the Bulgarian and Gagauz population migrated to the Russian Empire via the River Danube, after living many years under oppressive Ottoman rule, and settled in southern Bessarabia. Turkic-speaking tribes of the Nogai horde also inhabited the Budjak Region (in Turkish Bucak) of southern Bessarabia from the 16th to 18th centuries but were totally driven out prior to 1812.

Administratively, Bessarabia became an oblast of the Russian Empire in 1818, and a guberniya in 1873.

By the Treaty of Adrianople that concluded the Russo-Turkish War of 1828-1829 the entire Danube Delta was added to the Bessarabian oblast.[بحاجة لمصدر] According to Vasile Stoica, emissary of the Romanian government to the United States, in 1834, the Romanian language was banned from schools and government facilities, despite 80% of the population speaking the language. This would eventually lead to the banning of Romanian in churches, media, and books. According to the same author, those who protested the banning of Romanian could be sent to Siberia.[6]

At the end of the Crimean War, in 1856, by the Treaty of Paris, Southern Bessarabia (organised as the Cahul and Ismail counties, with the Bolgrad county split from the latter in 1864) was returned to Moldavia, causing the Russian Empire to lose access to the Danube river.

In 1859, Moldavia and Wallachia united to form the Romanian United Principalities (Romania), which included the southern part of Bessarabia.

The railway Chișinău-Iași was opened on June 1, 1875, in preparation for the Russo-Turkish War (1877–1878) and the Eiffel Bridge was opened on April 21 [ن.ق. April 9] 1877, just three days before the outbreak of the war. The Romanian War of Independence was fought in 1877–78, with the help of the Russian Empire as an ally. Northern Dobruja was awarded to Romania for its role in the 1877–78 Russo-Turkish War, and as compensation for the transfer of Southern Bessarabia.

The Kishinev pogrom took place in the capital of Bessarabia on April 6, 1903, after local newspapers published articles inciting the public to act against Jews; 47 or 49 Jews were killed, 92 severely wounded and 700 houses destroyed. The anti-Semitic newspaper Бессарабец (Bessarabetz, meaning "Bessarabian"), published by Pavel Krushevan, insinuated that local Jews killed a Russian boy. Another newspaper, Свет (Lat. Svet, meaning "World" or Russian for "Light"), used the age-old blood libel against the Jews (alleging that the boy had been killed to use his blood in preparation of matzos).

After the 1905 Russian Revolution, a Romanian nationalist movement started to develop in Bessarabia. In the chaos brought by the Russian revolution of October 1917, a National Council (Sfatul Țării) was established in Bessarabia, with 120 members elected from Bessarabia by some political and professional organizations and 10 elected from Transnistria (the left bank of Dniester where Moldovans and Romanians accounted for less than a third and the majority of the population was Ukrainian. See Demographics of Transdniestria).

The Rumcherod Committee (Central Executive Committee of the Soviets of Romanian Front, Black Sea Fleet and Odessa Military District) proclaimed itself the supreme power in Bessarabia.

On the pretext of securing supply lines against raids by Bolsheviks and armed bandits,[7]:33 members of the Moldavian legislative council Sfatul Țării and the Entente Powers requested military assistance from Romania, and the Romanian Army crossed the republic's border on January 23 [ن.ق. January 10] 1918;[8]:35–36 following several skirmishes with Moldovan and Bolshevik troops, the occupation of the whole region was completed in early March.[9]:85 The occupation of Bessarabia by the Romanians was not universally welcomed, and the members of the Bessarabian government denied that the Romanian troops had ever been invited to occupy the republic.[7]:33

Ukrainian SSR in 1933, after the Peace of Riga and the consolidation of USSR. Note the rose border line showing the Soviet claims over the former Russian guberniya of Bessarabia