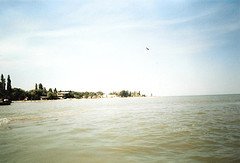 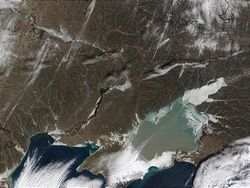 Historically, the sea has had rich marine life, both in variety, with over 80 fish and 300 invertebrate species identified, and in numbers. Consequently, fishing has long been a major activity in the area. The annual catch of recent years was 300,000 tonnes, about half of which are valuable species (sturgeon, pike-perch, bream, sea-roach, etc.).[3] This was partly due to extremely high biological productivity of the sea, which was stimulated by the strong supply of nutrients from numerous rivers feeding the sea, low water salinity, ample heating due to shallow waters and long vegetation period. However, diversity and numbers have been reduced by artificial reduction of river flow (construction of dams), over-fishing and water-intense large-scale cultivation of cotton, causing increasing levels of pollution. Fish hauls have rapidly decreased and in particular anchovy fisheries have collapsed.[2][3][4][5]

Green algae (and other plankton species) are mostly responsible for the colour of the Sea of Azov waters.

Because of the shallow waters, the development of aquatic life in the Sea of Azov is more characteristic of a lagoon, and the plankton patterns are rather similar in the open sea and near the shores. Despite its shallowness, the water has low transparency, so bottom plants are poorly developed and most algae are of planktonic type. The sea is characterised by high concentrations of organic matter and long blooming periods. Another specific feature of the sea is the variable salinity – low in the large bays and higher in the open sea, especially near the Kerch Strait. Therefore, the plankton species are distributed inhomogeneously in the Sea of Azov. Although many additional species are brought in from the saltier Black Sea, most of them cannot adjust to the variable salinity of the Sea of Azov, except for the euryhaline species.[6] About 600 species of planktonic algae are known in the Sea of Azov.[3] The number of species is dominated by diatoms and green algae; blue-green algae and pyrophites are significant, and euglena and yellow-green algae form only 5% of the species. Green algae are mostly responsible for the colour of the sea in the satellite images (see photos above).[6]

Regarding zooplankton, the fresh waters of the Tanganrog Bay are inhabited by cladocera, copepoda and rotifers, such as Brachionus plicatilis, Keratella curdata and Asplanchna. Western part of the sea, which is more saline, hosts three forms of Acartia clausi, as well as Centropages ponticus, meroplankton and larvae of gastropoda, bivalvia and polychaete.[7]

Benthos species reside mostly at the sea bottom and include worms, crustaceans, bottom protists, coelenterata and mollusks. Mollusks account for 60–98% of the invertebrate biomass at the Sea of Azov bottom.[7]

Sturgeons are among the major and most valuable commercial fish species of the Sea of Azov.[3]

There are 183 ichthyofauna species from 112 genera and 55 families in the Sea of Azov region. Among them, there are 50 rare and 19 endangered species, and the sturgeon Acipenser nudiventris is probably extinct in the region.[8]

The fauna of the freshwater Taganrog Bay is much poorer – it consists of 55 species from 36 genera and 16 families; among them, three species are rare and 6 are endangered.[9]

The shores of the Sea of Azov contain numerous estuaries and marshes and are dominated by reeds, sedges, Typha and Sparganium. Typical submerged plants are Charales, pond weed, hornworts and water lilies. Also common is sacred lotus.[10] The number of species is large; for example, the Belosaraysk and Berdyansk spits alone contain more than 200 each. Some spits are declared national nature reserves, such as Beglitsk,[11] Belosaraysk,[12] Krivaya[12] and Berdyansk Spits.[13][14][15]

Great cormorants and seagulls on the Belosaraysk Spit.

Estuaries and spits of the sea are rich in birds, mostly waterfowl, such as wild geese, ducks and seagulls. Colonies of cormorants and pelicans are common. Also frequently observed are swans, herons, sandpipers and many birds of prey. Mammals include foxes, wild cats, hares, hedgehogs, weasels, martens and wild boar.[15] Muskrats were introduced to the area in the early 20th century and are hunted for their fur.[10]

Rapana venosa from the Black Sea.

Balanus improvisus is the first benthos species which spread from the Black Sea in the early 20th century and settled in the Sea of Azov. Its current density is 7 kg/m2. From 1956, Rapana venosa is observed in the Sea of Azov, but it could not adjust to low salinity and therefore is limited to the neighborhood of the Kerch Strait. Several Sea of Azov mollusks, such as shipworm (Teredo navalis), soft-shell clam (Mya arernaria), Mediterranean mussel (Mytilus galloprovincialis) and Anadara inaequivalvis, originate from the Black Sea. Another example of invading species is the Dutch crab Rhithropanopeus harrisii which is observed both in saline and freshwater parts.[16]

Formerly three types of dolphins, short-beaked common dolphin, common bottlenose dolphin and harbour porpoise, regularly visited the Sea of Azov from the Black Sea although the common dolphin usually avoided the basin and Kerch Strait due to low salinity.[17] One type of harbour porpoise, Phocoena phocoena relicta, used to live in the Sea of Azov and was therefore called "Azov dolphin" (بالروسية: азовка) in the Soviet Union. Nowadays, dolphins are rarely observed in the Sea of Azov. This is attributed to shallowing of the sea, increasing navigation activities, pollution, and reduction in the fish population.[18][19]

Various species of pinnipeds and belugas[20] were introduced into Black Sea by mankind and later escaped either by accidental or purported causes. Of these, grey seal has been recorded within Kerch Strait and Sea of Azov.[21] Mediterranean monk seals became extinct in the Black Sea in 1997,[22] and historic presences of large whales such as minke whales into Black Sea is recorded,[23][24] although it is unclear whether these mammals historically occurred in the Azov Basin.

For centuries, the Sea of Azov has been an important waterway for the transport of goods and passengers. The first modern ironworks in Imperial Russia were located upstream on the Kalmius River at Donetsk, originally named Hughesovka (بالروسية: Юзовка). It was also important for the transportation of iron ores from the mines of the Kerch peninsula to the processing plant of Azovstal in Mariupol (formerly Zhdanov), Ukraine; this activity stopped after the closure of the mines in the 1990s.[25] Navigation increased after the construction in 1952 of the Volga–Don Canal which connected the Sea of Azov with the Volga River – the most important riverine transport route in the central Russia – thus connecting major cities such as Moscow, Volgograd and Astrakhan.[10] Currently, the major ports are in Taganrog, Mariupol, Yeysk and Berdyansk.[26][27]

Increasing navigation rates have resulted in more pollution and even in ecological disasters. On 11 November 2007, a strong storm resulted in the sinking of four ships in the Strait of Kerch, in the Russian Port of Kavkaz. The ships were the Russian bulk carriers Volnogorsk, Nakhichevan, Kovel and the Georgian Haji Izmail with a Turkish crew. Six other ships were driven from their anchors and stranded and two tankers were damaged (Volgoneft-139 and Volgoneft-123). As a result, about 1300 tons of fuel oil and about 6800 tons of sulfur entered the sea.[28][29]

Another traditional activity in the sea is fishing. The Sea of Azov used to be the most productive fishing area in the Soviet Union: typical annual fish catches of 300,000 tonnes converted to 80 kg per hectare of surface. (The corresponding numbers are 2 kg in the Black Sea and 0.5 kiloغرامs (18 أونصة) in the Mediterranean Sea.)[بحاجة لمصدر] The catch has decreased in the 21st century, with more emphasis now on fish farming, especially of sturgeon.

Traditionally much of the coastline has been a zone of health resorts.[30]

The irrigation system of the Taman Peninsula, supplied by the extended delta of the Kuban River, is favorable for agriculture and the region is famous for its vines. The area of the Sivash lagoons and Arabat Spit was traditionally a centre of a salt-producing industry. The Arabat Spit alone produced about 24,000 tonnes/year in the 19th century.[10][31]