For the German noble, see Albert Alcibiades, Margrave of Brandenburg-Kulmbach. 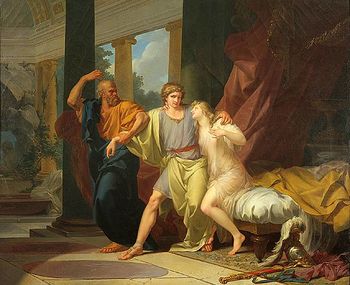 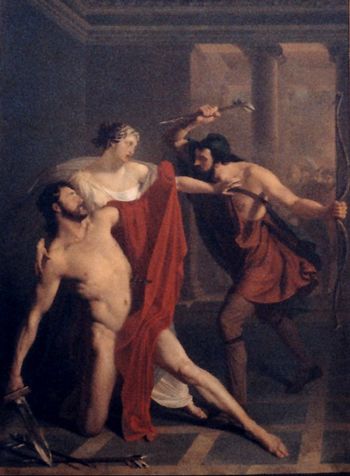 ^ a: Isocrates asserts that Alcibiades was never a pupil of Socrates.[4] Thus he does not agree with Plutarch's narration.[5] According to Isocrates, the purpose of this tradition was to accuse Socrates. The rhetorician makes Alcibiades wholly the pupil of Pericles.[6]
^ b: According to Plutarch, who is however criticized for using "implausible or unreliable stories" in order to construct Alcibiades' portrait,[7] Alcibiades once wished to see Pericles, but he was told that Pericles could not see him, because he was studying how to render his accounts to the Athenians. "Were it not better for him," said Alcibiades, "to study how not to render his accounts to the Athenians?".[5] Plutarch describes how Alcibiades "gave a box on the ear to Hipponicus, whose birth and wealth made him a person of great influence." This action received much disapproval, since it was "unprovoked by any passion of quarrel between them". To smooth the incident over, Alcibiades went to Hipponicus's house and, after stripping naked, "desired him to scourge and chastise him as he pleased". Hipponicus not only pardoned him but also bestowed upon him the hand of his daughter.[8] Another example of his flamboyant nature occurred during the Olympic games of 416 where "he entered seven teams in the chariot race, more than any private citizen had ever put forward, and three of them came in first, second, and fourth".[9] According to Andocides, once Alcibiades competed against a man named Taureas as choregos of a chorus of boys and "Alcibiades drove off Taureas with his fists. The spectators showed their sympathy with Taureas and their hatred of Alcibiades by applauding the one chorus and refusing to listen to the other at all."[10]
^ c: Plutarch and Plato agree that Alcibiades "served as a soldier in the campaign of Potidaea and had Socrates for his tentmate and comrade in action" and "when Alcibiades fell wounded, it was Socrates who stood over him and defended him".[5][11] Nonetheless, Antisthenes insists that Socrates saved Alcibiades at the Battle of Delium.[12]
^ d: Thucydides records several speeches which he attributes to Pericles; but Thucydides acknowledges that: "it was in all cases difficult to carry them word for word in one's memory, so my habit has been to make the speakers say what was in my opinion demanded of them by the various occasions, of course adhering as closely as possible to the general sense of what they really said."[13]
^ e: Kagan has suggested that Thrasybulus was one of the founding members of the scheme and was willing to support moderate oligarchy, but was alienated by the extreme actions taken by the plotters.[14] Robert J. Buck, on the other hand, maintains that Thrasybulus was probably never involved in the plot, possibly because he was absent from Samos at the time of its inception.[15]
^ f: In the case of the battle of Cyzicus, Robert J. Littman, professor at Brandeis University, points out the different accounts given by Xenophon and Diodorus. According to Xenophon, Alcibiades' victory was due to the luck of a rainstorm, while, according to Diodorus, it was due to a carefully conceived plan. Although most historians prefer the accounts of Xenophon,[16] Jean Hatzfeld remarks that Diodorus' accounts contain many interesting and unique details.[17]
^ g: Plutarch mentions Alcibiades' advice, writing that "he rode up on horseback and read the generals a lesson. He said their anchorage was a bad one; the place had no harbor and no city, but they had to get their supplies from Sestos".[18][19] B. Perrin regards Xenophon's testimony as impeachable[20] and prefers Diodorus' account.[21] According to A. Wolpert, "it would not have required a cynical reader to infer even from Xenophon's account that he (Alcibiades) was seeking to promote his own interests when he came forward to warn the generals about their tactical mistakes".[22]
^ h: According to Plutarch, some say that Alcibiades himself provoked his death, because he had seduced a girl belonging to a well-known family.[23] Thus there are two versions of the story: The assassins were probably either employed by the Spartans or by the brothers of the lady whom Alcibiades had seduced.[24] According to Isocrates, when the Thirty Tyrants established their rule, all Greece became unsafe for Alcibiades.[25]
^ i: Since the beginning of the war, the Athenians had already initiated two expeditions and sent a delegetion to Sicily.[26] Plutarch underscores that "on Sicily the Athenians had cast longing eyes even while Pericles was living".[27]