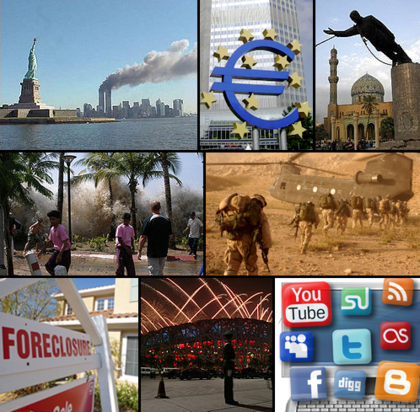 The War on Terror and War in Afghanistan began after the September 11 attacks in 2001.[1][2] The International Criminal Court was formed in 2002. A United States-led coalition invaded Iraq, and the Iraq war led to the end of Saddam Hussein's rule as Iraqi President and the Ba'ath Party in Iraq. Al-Qaeda and affiliated Islamist militant groups performed terrorist acts throughout the decade. These acts included the 2004 Madrid train bombings, 7/7 London bombings in 2005, and the Mumbai attacks related to al-Qaeda in 2008. The European Union expanded its sanctions amid Iran's failure to comply with its transparency obligations under the Nuclear Non Proliferation Treaty and UN resolutions.

The War on Terror generated extreme controversy around the world, with questions regarding the justification for U.S. actions leading to a loss of support for the American government, both in and outside the United States.[3] Additional armed conflict occurred in the Middle East, including between Israel and Hezbollah, then with Israel and the Hamas. The greatest loss of life due to natural disaster came from the 2004 tsunami, killing around a quarter-million people and displacing well over a million others. Cooperative international rescue missions by many countries from around the world helped in efforts by the most affected nations to rebuild and recover from the devastation. An enormous loss of life and property value came in 2005, when Hurricane Katrina flooded nearly the entire city of New Orleans. The resulting political fallout was severely damaging to the George W. Bush administration because of its perceived failure to act promptly and effectively. In 2008, Barack Obama was elected President of the United States and became the first African-American U.S. president when he succeeded Bush in 2009.[4]

The most prominent terrorist attacks committed against civilian population during the decade include:

Irregular combatants in North Darfur. The Arabic text on the bumper reads "The Sudan Liberation Army" (SLA).
Darfur refugee camp in Chad
Map showing the districts where the Naxalite movement is active (2007)

انظر أيضاً: عولمة § تأثيرات العولمة، وOffshore outsourcing § Source of conflict، و Business process outsourcing in India
Offshore outsourcing of jobs, such as this call centre in India, significantly increased during the decade as many multinational corporations moved their manufacturing and services from western countries to developing countries.

People queuing outside a Northern Rock bank branch in Birmingham, United Kingdom on September 15, 2007, to withdraw their savings because of the Subprime mortgage crisis.

Artist Concept of a NASA Mars Exploration Rover on Mars
These images show water in a very young lunar crater on the side of the moon that faces away from Earth.

The popularity of mobile phones and text messaging surged in the 2000s in the Western world.

Automotive navigation system in a taxicab.

Collision Warning with Brake Support on the 2009 Lincoln MKS

The highest-grossing film of the decade was Avatar (2009)

انظر أيضاً: عقد 2000 في ألعاب الڤيديو
PlayStation 2 was released in 2000 and became the best-selling gaming console of all time