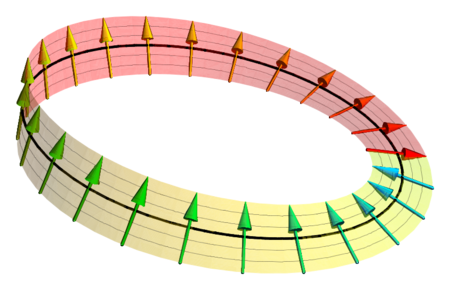 A spinor visualized as a vector pointing along the Möbius band, exhibiting a sign inversion when the circle (the "physical system") is continuously rotated through a full turn of 360°.[أ]

A gradual rotation can be visualized as a ribbon in space.[ت] Two gradual rotations with different classes, one through 360° and one through 720° are illustrated here in the belt trick puzzle. A solution of the puzzle is a continuous manipulation of the belt, fixing the endpoints, that untwists it. This is impossible with the 360° rotation, but possible with the 720° rotation. A solution, shown in the second animation, gives an explicit homotopy in the rotation group between the 720° rotation and the 0° identity rotation.
An object attached to belts or strings can spin continuously without becoming tangled. Notice that after the cube completes a 360° rotation, the spiral is reversed from its initial configuration. The belts return to their original configuration after spinning a full 720°.
A more extreme example demonstrating that this works with any number of strings. In the limit, a piece of solid continuous space can rotate in place like this without tearing or intersecting itself