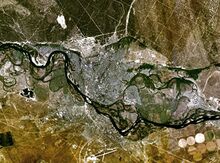 The first Russian settlement in the area dates from 1718, when Russia built a fort beside the river Irtysh, near the ruins of an ancient Buddhist monastery, where seven buildings could be seen. The fort (and later the city) was named Semipalatinsk (Russian for "Seven-Chambered City") after the monastery. The fort suffered frequently from flooding caused by snowmelt swelling the Irtysh.

In 1778 the fort was relocated 18 kiloمترs (59,000 قدم) upstream to less flood-prone ground.[بحاجة لمصدر] A small city developed around the fort, and largely served the river trade between the nomadic peoples of Central Asia and the growing Russian Empire. The construction of the Turkestan-Siberia Railway in the early 20th century added to the city's importance, making it a major point of transit between Central Asia and Siberia. On 19 May 1854, Semipalatinsk was designated as the capital of the Semipalatinsk Oblast within the Russian Empire.

Between 1917 and 1920, the city operated as the capital of the largely unrecognized Alash Autonomy, a state (1917–1920) established after the outbreak of the October revolution in Russia. The city was called Alash-qala during the Alash Autonomy years. Red Army forces loyal to Petrograd took control of the area in 1920. It was the center of the Semipalatinsk Governorate (ru) until 17 January 1928, then of the Eastern Kazakhstan Oblast between 17 January 1928 and 14 October 1939 and finally of the Semipalatinsk Oblast between 1939 and 1997.

In 1949 the Soviet atomic bomb programme selected a site on the steppe 150 kم (93 ميل) west of the city as the location for its weapons testing. For decades, Kurchatov (the secret city at the heart of the test range named for Igor Kurchatov, father of the Soviet atomic bomb) was home to many of the brightest stars of Soviet weapons science. The Soviet Union operated the Semipalatinsk Test Site (STS) from the first explosion in 1949 until 1989; 456 nuclear tests, including 340 underground and 116 atmospheric tests, took place there.[3]

Semey has suffered serious environmental and health effects from the time of its atomic prosperity: nuclear fallout from the atmospheric tests and uncontrolled exposure of the workers, most of whom lived in the city, have resulted in high rates of cancer, childhood leukemia, erectile dysfunction, and birth defects among the residents of Semey and neighbouring villages.[4]

Modern Semey, a bustling university town, has a population exceeding 300,000. Because of its proximity to the Kazakh border with the Russian Federation, and the large scientific community attached to the STS labs and the university, which includes many Russians, Semey is said to have a more Russian character than other cities in Kazakhstan.

Semipalatinsk Oblast merged with the larger East Kazakhstan Region, whose capital city is Oskemen, on 23 May 1997.

In 2007 the Semipalatinsk City Council voted unanimously in favour of changing the name of the city to Semey. The Chairman said that existing name had negative associations because of the extensive atomic testing there.[7]

Semey has a warm-summer humid continental climate (Köppen climate classification Dfb) with warm summers and very cold winters. Precipitation is low for the whole year, except for July which has an average of 50 milliمترs (2.0 بوصة) compared to less than 30 milliمترs (1.2 بوصة) in other months. Snow is common, though light, in winter. The lowest temperature on record is −48.6 °م (−55.5 °ف), recorded in November 1938, and the highest temperature is 42.5 °م (108.5 °ف), recorded in August 2002.[8]

Semey is situated at the Turkestan–Siberia Railway and offers connections to Almaty (former Alma-Ata), Barnaul, and Novosibirsk, among others.

The city has a museum to commemorate Abay Qunanbayuli.

Both a museum and a street are named after Dostoyevsky. The Museum of F. M. Dostoevsky in Semey was opened on 7 May 1971. It was established by the Resolution of the Council of Ministers of the Kazakh SSR N 261. Of the seven museums devoted to Dostoevsky, this is the only one located outside Russia.

Semey is famous for its intellectual medical community with leading Semey State Medical University which provides the region and the country with highly professional health specialists.

Semey is twinned with: