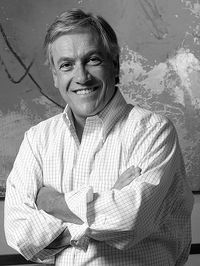 Piñera was sworn in as the 35th President of the Republic of Chile on 11 March 2010, in a ceremony held in a plenary session of the National Congress in Valparaíso.[بحاجة لمصدر] In the same ceremony, Piñera's Cabinet ministers were sworn in. The ceremony was also marked by a 6.9 Mw earthquake and subsequent aftershocks that upset the invitees.[5] Shortly after, the National Congress building was evacuated due to a tsunami alert that proved to be false a couple of hours later.[بحاجة لمصدر] On 12 October 2010, Piñera rallied his countrymen in the rescue of 33 trapped miners, all of whom were rescued after 70 days following a mining accident.[بحاجة لمصدر] "Chile will never be the same", he said to the miners' foreman, Luis Urzúa, as he (the last of the miners to emerge from the cavern) greeted Piñera, in a broadcast carried live across the globe.[بحاجة لمصدر] Despite much goodwill in Chile following this, many Chileans[من؟] are still waiting on Piñera to rectify anti-terrorism laws in Chile which effectively mean the indigenous Mapuche people can be dealt with as "terrorists".[بحاجة لمصدر] This matter has led to hunger strikes which started before the mining disaster, and are set to continue afterwards.[6]

In January 2011 he faced the protest in Magallanes Region in response to a proposed increase in the price of natural gas there by 16.8%.[بحاجة لمصدر] The protests left more than two thousand cars isolated while trying to cross from the Argentine province of Tierra del Fuego to the province of Santa Cruz through Chilean territory. Another 1,500 tourists were left without movement in Torres del Paine National Park after routes to Puerto Natales and El Calafate were cut.[7] In consequence, on 14 January, Minister Secretary General of Government Ena von Baer announced changes in Sebastián Piñera's government cabinet, including the resignation of Ricardo Raineri as Energy Minister. Laurence Golborne became Mining and Energy Minister, on 16 January.[8]

In March 2011, President Piñera led a state visit to Spain to boost relations between the two countries.[بحاجة لمصدر] While in Spain, President and Mrs Piñera, with Prince Felipe and Princess Letizia, opened the exhibition ”Don Qui. El Quijote de Matta”, at the Cervantes Institute of Madrid.[9]

Amidst the severe 2011 Chilean student protests Piñera shuffled his cabinet and removed Joaquín Lavín from the post of minister of education. With respect to the protest, Piñera has defended for-profit activity in education and proposed to legalize it, rejecting the students' demands for the public ownership of educational establishments.[10] During August 2011, Piñera's public approval declined precipitously amidst continuous protests, to the extent that some polls indicated that he was the least popular Chilean leader since Augusto Pinochet. His approval ratings dropped to as low as 22% according to a CERC survey.[11] As such, Piñera's chances of passing sought reforms were seen as remote.[12]

As president, Piñera expressed support for the Argentine claim on the Falkland Islands, referring to "the unrenounceable rights of Argentina on the islands".[13]

In March 2012, Piñera visited Vietnam with the intention of increasing cooperation between the two countries in general and with Ho Chi Minh City, Vietnam's most populous and largest economic hub, in particular.[بحاجة لمصدر] HCM City also called for a Chilean sister city while receiving Piñera on 23 March.[بحاجة لمصدر] The visit included the signing of a bilateral trade agreement and several cooperation pacts in education, tourism, culture and finance.[14]

Early in 2012 physicist Frank Duarte sharply criticized Piñera's performance in the handling of the Chilean–Peruvian maritime dispute at The Hague, deemed as favoring commercial interests over the interest of the Chilean people, and called for Chile's withdrawal from The Hague.[15] Following the adverse ruling against Chile in 2014, several political figures in Chile, from a variety of political parties, also called for Chile's withdrawal from The Hague that would, in addition, imply a withdrawal from the Pact of Bogota.[16][17]

In December 2011 during a state visit to Mexico a joke made by Piñera where he compared women with politicians caused uproar in Chile, sparking criticism from his own minister Carolina Schmidt who said of the joke that it was "hurting to many women".[18] In the joke Piñera said that "when a lady says "no" it means maybe, when she says maybe it means yes and when she says yes she is not a lady."[19] The Chilean Network Against Domestic and Sexual Violence called the joke "misogynic" and "a shame for the whole country".[19] Previously on a state visit to Peru in 2011 Piñera received criticism for his informal style after he revealed to Peruvian president-elect Ollanta Humala that he was a descendant of the Inca Huayna Capac.[20] Senator Jorge Pizarro criticized Piñera's comment to Ollanta Humala, calling for more careful and respectful attitudes.[21]

On December 17, Piñera won the second round of the Chilean General election, defeating the left wing candidate Alejandro Guillier to become President-Elect. Piñera took office for a second time on March 11, 2018, succeeding the outgoing Michelle Bachelet.