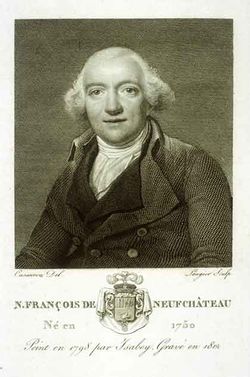 Born at Saffais, in Meurthe-et-Moselle, the son of a schoolteacher, he studied at the Jesuit college of Neufchâteau in the Vosges, and at the age of fourteen published a volume of poetry which obtained the interest of Jean-Jacques Rousseau and of Voltaire. Neufchâteau conferred on him its name, and he was elected member of some of the main academies of France. In 1783 he was named procureur-général to the council of Saint Domingue. He had previously been engaged on a translation of Ariosto, which he finished before his return to France five years afterwards, but it was destroyed during the shipwreck which occurred during his voyage home.[1]

After the French Revolution, Neufchâteau was elected deputy supplant to the National Assembly, charged with the organization of the département of the Vosges, and elected later to the Legislative Assembly, of which he first became secretary and then president. في 1793 he was imprisoned on account of his supposed political sentiments, as they were deduced from his drama Paméla ou la vertu récompensée (Théâtre de la Nation, 1 August 1793), but was set free a few days afterwards with the start of the Thermidorian Reaction.[1]

في 1797, he became Minister of the Interior, distinguishing himself by his thorough administration. It is Neufchâteau who initiated the French system of inland navigation. He inaugurated the museum of the Louvre and was one of the promoters of the Exposition des produits de l'industrie française, the first universal exhibition of industrial products.[1] He replaced Lazare Carnot as a member of the French Directory, a position he held between 8 September 1797, and 20 May 1798.[بحاجة لمصدر]

From 1804 to 1806 he was president of the Sénat conservateur, coinciding with the establishment of the First Empire – his office implied that he was the one to solicit Napoleon Bonaparte to assume the title of Emperor. In 1803, he was admitted to the Académie française, and in 1808 he received the dignity of count. Retiring from public life in 1814, after the Bourbon Restoration, he occupied himself chiefly with the study of agriculture until his death.[1]

Neufchâteau had multiple accomplishments, and interested himself in a great variety of subjects, but his fame rests mostly on what he did as a statesman for the encouragement and development of the industries of France. His late poetical productions are not judged to be as original as his youth oeuvre. He was a noted grammarian and literary critic, as is witnessed by his editions of the Lettres provinciales and Pensées of Blaise Pascal (Paris, 1822 and 1826) and Alain-René Lesage's Gil Blas (Paris, 1820). He was also the author of a large number of works on agriculture.[1]