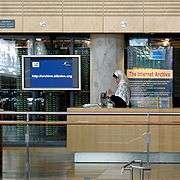 Users who want to archive material permanently and immediately cite an archived version can use the Archive-It system, a for-fee subscription service.[7] Data collected with Archive-It is periodically indexed into the general Wayback Machine. As of February 2009, Archive-It had created over 724 million URLs for 746 public collections, including government bodies, universities, and cultural institutions. Some of the organizations participating in Archive-It include the Electronic Literature Organization, the State Archives of كارولينا الشمالية, the Texas State Library and Archives Commission, Stanford University, the National Library of Australia, the Research Libraries Group (RLG), and many others.

In addition to web archives, the Internet Archive maintains extensive collections of digital media that are either public domain or licensed under a license that allows redistribution, such as Creative Commons licenses. The media are organized into collections by media type (moving images, audio, text, etc.), and into sub-collections by various criteria. Each of the main collections includes an "Open Source" sub-collection where general contributions by the public can be stored.

IA's Brick Films collection contains stop-motion animation filmed with LEGO bricks, some of which are "remakes" of feature films. The Election 2004 collection is a non-partisan public resource for sharing video materials related to the 2004 United States Presidential Election. The Independent News collection includes sub-collections such as the Internet Archive's World At War competition from 2001, in which contestants created short films demonstrating "why access to history matters." Among their most-downloaded video files are eyewitness recordings of the devastating 2004 Indian Ocean earthquake. The September 11th Television Archive contains archival footage from the world's major television networks of the terrorist attacks of September 11th, 2001 as they unfolded on live television.

Some of the films available on the Internet Archive are:

The Live Music Archive sub-collection includes over 50,000 concert recordings from independent artists, as well as more established artists and musical ensembles with permissive rules about recording their concerts such as the Grateful Dead, and more recently, The Smashing Pumpkins.

The texts collection includes digitized books from various libraries around the world as well as many special collections. As of October 2008, the Internet Archive operated 18 scanning centers in five countries, digitizing about 1,000 books a day, financially supported by libraries and foundations.[15] As of November 2008, when there were about 1 million texts, the entire collection was over 0.5 petabytes, which includes raw camera images, cropped and skewed images, PDFs, and raw OCR data.[16]

Between about 2006 and 2008 Microsoft Corporation had a special relationship with Internet Archive texts through its Live Search Books project, scanning over 300,000 books which were contributed to the collection, as well as financial support and scanning equipment. On May 23, 2008 Microsoft announced it would be ending the Live Book Search project and no longer scanning books.[17] Microsoft will be making its scanned books available without contractual restriction and making the scanning equipment available to its digitization partners and libraries to continue digitization programs.[17]

Around October 2007 Internet Archive began importing book scans made by Google Book Search which are in the public domain.[18] As of November 2008 there are over half a million such imports representing almost half of the total books on Internet Archive. The books are identical to the copies found on Google, except without the Google watermarks.[19]

The Open Library is another project of the Internet Archive. The site, still in beta, seeks to include a web page database for every book ever published, a sort of Open Source version of WorldCat. It holds the catalog records of nearly 20 million books, in addition to the full texts of about 400,000 public domain books, which are fully searchable.[20][21] Open Library is a free/open source software project, with its source code freely available on the Open Library site.

انظر أيضاً: Scientology and the Internet

In late 2002, the Internet Archive removed various sites critical of Scientology from the Wayback Machine.[22] The error message stated that this was in response to a "request by the site owner."[23] It was later clarified that lawyers from the Church of Scientology had demanded the removal and that the actual site owners did not want their material removed.[24]

In an October 2004 case called "Telewizja Polska SA v. Echostar Satellite", a litigant attempted to use the Wayback Machine archives as a source of admissible evidence, perhaps for the first time. Telewizja Polska is the provider of TVP Polonia and EchoStar operates the Dish Network. Prior to the trial proceedings, EchoStar indicated that it intended to offer Wayback Machine snapshots as proof of the past content of Telewizja Polska’s website. Telewizja Polska brought a motion in limine to suppress the snapshots on the grounds of hearsay and unauthenticated source, but Magistrate Judge Arlander Keys rejected Telewizja Polska’s assertion of hearsay and denied TVP's motion in limine to exclude the evidence at trial.[25] However, at the actual trial, district Court Judge Ronald Guzman, the trial judge, overruled Magistrate Keys' findings, and held that neither the affidavit of the Internet Archive employee nor the underlying pages (i.e., the Telewizja Polska website) were admissible as evidence. Judge Guzman reasoned that the employee's affidavit contained both hearsay and inconclusive supporting statements, and the purported webpage printouts themselves were not self-authenticating.[26]

In 2003, Healthcare Advocates, Inc. were defendants in a trademark violation lawsuit wherein the prosecution attempted to use archived web material accessed via the Internet Archive. When they lost that suit, the company turned around and attempted to sue the Internet Archive for violating the Digital Millennium Copyright Act (DMCA) and the Computer Fraud and Abuse Act. They claimed that since they had installed a robots.txt file on their website, it should have been avoided by the Internet Archive’s web crawlers but was not.[27] The initial lawsuit was filed on June 26, 2003, and they added the robots.txt file on July 8, 2003, so pages should have been rendered unavailable retroactively. The lawsuit with Healthcare Advocates was settled out of court.[28]

Robots.txt is used as part of the Robots Exclusion Standard, a voluntary protocol the Internet Archive respects that disallows bots from indexing certain pages delineated by the creator as off-limits. As a result, the Internet Archive has rendered unavailable a number of websites that are now inaccessible through the Wayback Machine. This is sometimes due to a new domain owner placing a robots.txt file that disallows indexing of the site. The administrators claim to be working on a system that will allow access to that previous material while excluding material created after the point the domain switched hands.[بحاجة لمصدر] Currently, the Internet Archive applies robots.txt rules retroactively; if a site blocks the Internet Archive, like Healthcare Advocates, any previously archived pages from the domain are also rendered unavailable. In cases of blocked sites, only the robots.txt file is archived. This practice would appear to be detrimental to researchers looking for information that was available in the past.

However, the Internet Archive also states that, "sometimes a web site owner will contact us directly and ask us to stop crawling or archiving a site. We comply with these requests."[29] They also say, "The Internet Archive is not interested in preserving or offering access to Web sites or other Internet documents of persons who do not want their materials in the collection."[30]

In October 2005, htpCompany was a defendant in a U.S. small claims case. The plaintiff of the case had purchased online advertising from the defendant and claimed that the ads had been pulled prior to the end of the paid-for advertising period whereas the defendant claimed in court that the ads had stayed up for the full period. The plaintiff produced printouts of archive.org showing that the ads had gone up and then had disappeared before their expiration. The judge allowed the printouts as evidence and decided the case in favor of the plaintiff. However, because this was a small claims case and the evidentiary rules were not as strict, it was considered unlikely to set any precedent for civil cases in Supreme Court.[31]

المقالة الرئيسية: Internet as a source of prior art

The United States patent office and, provided some additional requirements are met (e.g. providing an authoritative statement of the archivist), the European Patent Office will accept date stamps from the Internet Archive as evidence of when a given web page was accessible to the public. These dates are used to determine if a web page is available as prior art for instance in examining a patent application.

There are technical limitations to archiving a website, and as a consequence, it is possible for opposing parties in litigation to misuse the results provided by website archives. This problem can be exacerbated by the practice of submitting screen shots of web pages in complaints, answers or expert witness reports; when the underlying links are not exposed and therefore can contain errors. For example; archives like the Wayback Machine do not fill out forms and therefore do not include the contents of e-commerce databases in their archives.[32]

In November 2005, free downloads of Grateful Dead concerts were removed from the site. John Perry Barlow identified Bob Weir, Mickey Hart, and Bill Kreutzmann as the instigators of the change, according to a New York Times article.[33] Phil Lesh commented on the change in a November 30, 2005, posting to his personal website:

It was brought to my attention that all of the Grateful Dead shows were taken down from Archive.org right before Thanksgiving. I was not part of this decision making process and was not notified that the shows were to be pulled. I do feel that the music is the Grateful Dead's legacy and I hope that one way or another all of it is available for those who want it.[34]

A November 30 forum post from Brewster Kahle summarized what appeared to be the compromise reached among the band members. Audience recordings could be downloaded or streamed, but soundboard recordings were to be available for streaming only. Concerts have since been re-added.[35]

On December 12, 2005, activist Suzanne Shell demanded Internet Archive pay her US$100,000 for archiving her website profane-justice.org between 1999 and 2004.[36] Internet Archive filed a declaratory judgment action in the United States District Court for the Northern District of California on January 20, 2006, seeking a judicial determination that Internet Archive did not violate Shell’s copyright. Shell responded and brought a countersuit against Internet Archive for archiving her site, which she alleges is in violation of her terms of service.[37] On February 13, 2007, a judge for the United States District Court for the District of Colorado dismissed all counterclaims except breach of contract.[36] The Internet Archive did not move to dismiss copyright infringement claims Shell asserted arising out of its copying activities, which will also go forward.[38] On April 25, 2007, Internet Archive and Suzanne Shell jointly announced the settlement of their lawsuit. The Internet Archive said, “Internet Archive has no interest in including materials in the Wayback Machine of persons who do not wish to have their Web content archived. We recognize that Ms. Shell has a valid and enforceable copyright in her Web site and we regret that the inclusion of her Web site in the Wayback Machine resulted in this litigation. We are happy to have this case behind us.” Ms. Shell said, “I respect the historical value of Internet Archive’s goal. I never intended to interfere with that goal nor cause it any harm.”[39]

Wikipedia:Using the Wayback Machine - A guide to the Internet Archive's Wayback machine.