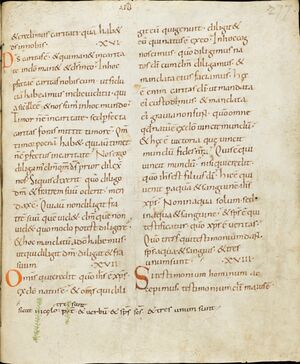 The Vulgate is largely the work of Jerome of Stridon who, in 382, had been commissioned by Pope Damasus I to revise the Vetus Latina Gospels used by the Roman Church. Later, on his own initiative, Jerome extended this work of revision and translation to include most of the books of the Bible. The Vulgate became progressively adopted as the Bible text within the Western Church. Over succeeding centuries, it eventually eclipsed the Vetus Latina. By the 13th century it had taken over from the former version the designation versio vulgata[1] (the "version commonly used") or vulgata for short. The Vulgate also contains some Vetus Latina translations which Jerome did not work on.

Works about the Vulgate