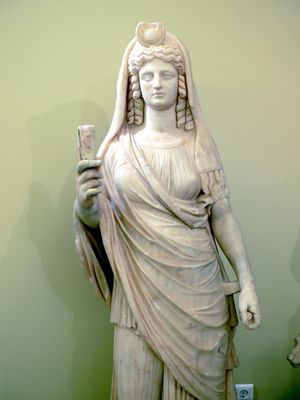 The story of her abduction by Hades against her will is traditionally referred to as the Rape of Persephone. It is mentioned briefly in Hesiod's Theogony,[1] and told in considerable detail in the Homeric Hymn to Demeter. Persephone used to live far away from the other gods, a goddess within Nature herself before the days of planting seeds and nurturing plants. In the Olympian telling, the gods Hermes and Apollo had wooed Persephone; but Demeter rejected all their gifts and hid her daughter away from the company of the Olympian gods.[2] Zeus, it is said, permitted Hades, who was in love with the beautiful Persephone, to abduct her as her mother Demeter was not likely to allow her daughter to go down to Hades. Persephone was gathering flowers with the Oceanids along with Artemis and Athena—the Homeric Hymn says—in a field when Hades came to abduct her, bursting through a cleft in the earth.[3] Demeter, when she found her daughter had disappeared, searched for her all over the earth with Hecate's torches. In most versions she forbids the earth to produce, or she neglects the earth and in the depth of her despair she causes nothing to grow. Helios, the sun, who sees everything, eventually told Demeter what had happened and at length she discovered the place of her abode. Finally, Zeus, pressed by the cries of the hungry people and by the other deities who also heard their anguish, forced Hades to return Persephone.[4]

Hades indeed complied with the request, but first he tricked her, giving her some pomegranate seeds to eat. Persephone was released by Hermes, who had been sent to retrieve her, but because she had tasted food in the underworld, she was obliged to spend a third of each year (the winter months) there, and the remaining part of the year with the gods above.[5] With the later writers Ovid and Hyginus, Persephone's time in the underworld becomes half the year.[6]

Various local traditions place Persephone's abduction in a different location. The Sicilians, among whom her worship was probably introduced by the Corinthian and Megarian colonists, believed that Hades found her in the meadows near Enna, and that a well arose on the spot where he descended with her into the lower world. The Cretans thought that their own island had been the scene of the rape, and the Eleusinians mentioned the Nysian plain in Boeotia, and said that Persephone had descended with Hades into the lower world at the entrance of the western Oceanus. Later accounts place the rape in Attica, near Athens, or near Eleusis.[4]

The return of Persephone, by Frederic Leighton (1891)

The Homeric hymn mentions the Nysion (or Mysion) which was probably a mythical place. The location of this mythical place may simply be a convention to show that a magically distant chthonic land of myth was intended in the remote past.[7] Before Persephone was abducted by Hades, the shepherd Eumolpus and the swineherd Eubuleus saw a girl in a black chariot driven by an invisible driver being carried off into the earth which had violently opened up. Eubuleus was feeding his pigs at the opening to the underworld when Persephone was abducted by Plouton. His swine were swallowed by the earth along with her, and the myth is an etiology for the relation of pigs with the ancient rites in Thesmophoria,[8] and in Eleusis.

In some versions, Ascalaphus informed the other deities that Persephone had eaten the pomegranate seeds. When Demeter and her daughter were reunited, the Earth flourished with vegetation and color, but for some months each year, when Persephone returned to the underworld, the earth once again became a barren realm. This is an origin story to explain the seasons.

In an earlier version, Hecate rescued Persephone. On an Attic red-figured bell krater of c. 440 BC in the Metropolitan Museum of Art, Persephone is rising as if up stairs from a cleft in the earth, while Hermes stands aside; Hecate, holding two torches, looks back as she leads her to the enthroned Demeter.[9]

The 10th-century Byzantine encyclopedia Suda introduces a goddess of a blessed afterlife assured to Orphic mystery initiates. This Macaria is asserted to be the daughter of Hades, but no mother is mentioned.[10]