Three-dimensional space (also: 3-space or, rarely, tri-dimensional space) is a geometric setting in which three values (called parameters) are required to determine the position of an element (i.e., point). This is the informal meaning of the term dimension. 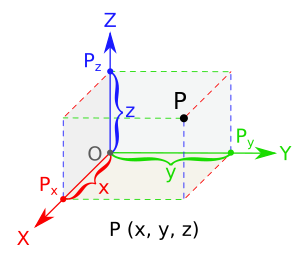 A representation of a three-dimensional Cartesian coordinate system with the x-axis pointing towards the observer.

In physics and mathematics, a sequence of n numbers can be understood as a location in n-dimensional space. When n = 3, the set of all such locations is called three-dimensional Euclidean space (or simply Euclidean space when the context is clear). It is commonly represented by the symbol ℝ3.[1][2] This serves as a three-parameter model of the physical universe (that is, the spatial part, without considering time), in which all known matter exists. While this space remains the most compelling and useful way to model the world as it is experienced,[3] it is only one example of a large variety of spaces in three dimensions called 3-manifolds. In this classical example, when the three values refer to measurements in different directions (coordinates), any three directions can be chosen, provided that vectors in these directions do not all lie in the same 2-space (plane). Furthermore, in this case, these three values can be labeled by any combination of three chosen from the terms width, height, depth, and length.

In mathematics, analytic geometry (also called Cartesian geometry) describes every point in three-dimensional space by means of three coordinates. Three coordinate axes are given, each perpendicular to the other two at the origin, the point at which they cross. They are usually labeled x, y, and z. Relative to these axes, the position of any point in three-dimensional space is given by an ordered triple of real numbers, each number giving the distance of that point from the origin measured along the given axis, which is equal to the distance of that point from the plane determined by the other two axes.[4]

Other popular methods of describing the location of a point in three-dimensional space include cylindrical coordinates and spherical coordinates, though there are an infinite number of possible methods. For more, see Euclidean space.

Below are images of the above-mentioned systems.

Two distinct lines can either intersect, be parallel or be skew. Two parallel lines, or two intersecting lines, lie in a unique plane, so skew lines are lines that do not meet and do not lie in a common plane.

Varignon's theorem states that the midpoints of any quadrilateral in ℝ3 form a parallelogram, and hence are coplanar.

المقالة الرئيسية: كرة
A perspective projection of a sphere onto two dimensions

A sphere in 3-space (also called a 2-sphere because it is a 2-dimensional object) consists of the set of all points in 3-space at a fixed distance r from a central point P. The solid enclosed by the sphere is called a ball (or, more precisely a 3-ball). The volume of the ball is given by

Another type of sphere arises from a 4-ball, whose three-dimensional surface is the 3-sphere: points equidistant to the origin of the euclidean space ℝ4. If a point has coordinates, P(x, y, z, w), then x2 + y2 + z2 + w2 = 1 characterizes those points on the unit 3-sphere centered at the origin.

In three dimensions, there are nine regular polytopes: the five convex Platonic solids and the four nonconvex Kepler-Poinsot polyhedra.

A surface generated by revolving a plane curve about a fixed line in its plane as an axis is called a surface of revolution. The plane curve is called the generatrix of the surface. A section of the surface, made by intersecting the surface with a plane that is perpendicular (orthogonal) to the axis, is a circle.

In analogy with the conic sections, the set of points whose Cartesian coordinates satisfy the general equation of the second degree, namely,

There are six types of non-degenerate quadric surfaces:

Both the hyperboloid of one sheet and the hyperbolic paraboloid are ruled surfaces, meaning that they can be made up from a family of straight lines. In fact, each has two families of generating lines, the members of each family are disjoint and each member one family intersects, with just one exception, every member of the other family.[6] Each family is called a regulus.

A vector can be pictured as an arrow. The vector's magnitude is its length, and its direction is the direction the arrow points. A vector in ℝ3 can be represented by an ordered triple of real numbers. These numbers are called the components of the vector.

the formula for the Euclidean length of the vector.

Without reference to the components of the vectors, the dot product of two non-zero Euclidean vectors A and B is given by[8]

where θ is the angle between A and B.

The cross product or vector product is a binary operation on two vectors in three-dimensional space and is denoted by the symbol ×. The cross product a × b of the vectors a and b is a vector that is perpendicular to both and therefore normal to the plane containing them. It has many applications in mathematics, physics, and engineering.

The space and product form an algebra over a field, which is neither commutative nor associative, but is a Lie algebra with the cross product being the Lie bracket.

One can in n dimensions take the product of n − 1 vectors to produce a vector perpendicular to all of them. But if the product is limited to non-trivial binary products with vector results, it exists only in three and seven dimensions.[9]

The cross-product in respect to a right-handed coordinate system

In a rectangular coordinate system, the gradient is given by

The divergence of a continuously differentiable vector field F = U i + V j + W k is equal to the scalar-valued function:

For some scalar field f : U ⊆ Rn → R, the line integral along a piecewise smooth curve C ⊂ U is defined as

where r: [a, b] → C is an arbitrary bijective parametrization of the curve C such that r(a) and r(b) give the endpoints of C and  .

For a vector field F : U ⊆ Rn → Rn, the line integral along a piecewise smooth curve C ⊂ U, in the direction of r, is defined as

where · is the dot product and r: [a, b] → C is a bijective parametrization of the curve C such that r(a) and r(b) give the endpoints of C.

where the expression between bars on the right-hand side is the magnitude of the cross product of the partial derivatives of x(s, t), and is known as the surface element. Given a vector field v on S, that is a function that assigns to each x in S a vector v(x), the surface integral can be defined component-wise according to the definition of the surface integral of a scalar field; the result is a vector.

A volume integral refers to an integral over a 3-dimensional domain.

It can also mean a triple integral within a region D in R3 of a function   and is usually written as:

The fundamental theorem of line integrals, says that a line integral through a gradient field can be evaluated by evaluating the original scalar field at the endpoints of the curve.

Suppose V is a subset of   (in the case of n = 3, V represents a volume in 3D space) which is compact and has a piecewise smooth boundary S (also indicated with ∂V = S ). If F is a continuously differentiable vector field defined on a neighborhood of V, then the divergence theorem says:[11]

Three-dimensional space has a number of topological properties that distinguish it from spaces of other dimension numbers. For example, at least three dimensions are required to tie a knot in a piece of string.[12]

In differential geometry the generic three-dimensional spaces are 3-manifolds, which locally resemble  .

Many ideas of dimension can be tested with finite geometry. The simplest instance is PG(3,2), which has Fano planes as its 2-dimensional subspaces. It is an instance of Galois geometry, a study of projective geometry using finite fields. Thus, for any Galois field GF(q), there is a projective space PG(3,q) of three dimensions. For example, any three skew lines in PG(3,q) are contained in exactly one regulus.[13]