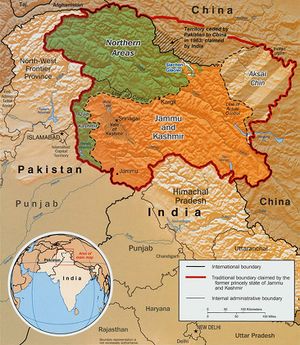 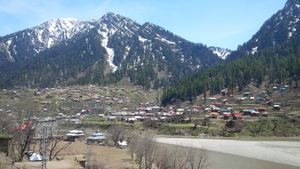 للمزيد من المعلومات: البوذية في كشمير و شايڤية كشمير
This general view of the unexcavated Buddhist stupa near Baramulla, with two figures standing on the summit, and another at the base with measuring scales, was taken by John Burke in 1868. The stupa, which was later excavated, dates to 500 CE.
Kashmiri Pandits, natives of Kashmir Valley belong to one of the prominent Shaiva sects of Hinduism.

Raja Lal Singh led the Sikh forces against the British in the First Anglo-Sikh War (1845–46) and was defeated in the Battle of Sobraon on 10 February 1846. Under the terms of the Treaty of Lahore, Lal Singh surrender Kashmir which the British sold to some of the Dogra ruler of Jamu, Raja Gulab Singh, an ally of the British, at a nominal price.

Kashmir Solidarity Day is celebrated in Pakistan on 5 February every year. This banner was hung in Islamabad, Pakistan

Ladakh is inhabited by people of Tibetan descent

للمزيد: Economy of Azad Kashmir and Economy of Jammu and Kashmir
Tourism is one of the main sources of income for vast sections of the Kashmiri population. Shown here is the famous Dal Lake in Srinagar, India.
Kashmir as seen from LOC.