الأسرة الثالثة من أور, also known as the Neo-Sumerian Empire, refers to both a 21st to 20th century BC (short chronology timeline) Sumerian ruling dynasty based in the city of أور and a short-lived territorial-political state which some historians consider to have been a nascent empire. The Third Dynasty of Ur is commonly abbreviated as Ur III by historians studying the period. 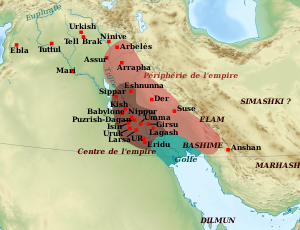 The Third Dynasty of Ur was the last Sumerian dynasty which came to preeminent power in Mesopotamia. It began after several centuries of control by Akkadian and Gutian kings. It controlled the cities of Isin, Larsa and Eshnunna and extended as far north as the الجزيرة.

Assyriologists employ many complicated methods for establishing the most precise dates possible for this period, but controversy still exists. Generally, scholars use either the conventional (middle) or the low (short) chronologies. They are as follows:

One salient feature of Ur III is its establishment of one of the earliest known law-codes, the Code of Ur-Nammu. It is quite similar to the famous Code of Hammurabi, resembling its prologue and bodily structure. Extant copies, written in Old Babylonian, exist from Nippur, Sippar, and also Ur itself. Although the prologue credits Ur-Nammu, the author is still somewhat under dispute; some scholars attribute it to his son, Shulgi.

The prologue to the law-code, written in the first person, established the king as the beacon of justice for his land, a role that previous kings normally did not play. He claims to want justice for all, including traditionally unfortunate groups in the kingdom like the widower or the orphan.

More legal disputes were dealt with locally by government officials called mayors, although their decision could be appealed and eventually overthrown by the provincial governor. Sometimes legal disputes were publicly aired with witnesses present at a place like the town square or in front of the temple. However, the image of the king as the supreme judge of the land took hold, and this image appears in many literary works and poems. Citizens sometimes wrote letters of prayer to the king, either present or past.