إدرنه (الأمريكي /eɪˈdɪərnə,_ɛˈʔ/,[2][3] تركية: [eˈdiɾne]), historically known as Adrianople ( /ˌeɪdriəˈnoʊpəl/; باللاتينية: Hadrianopolis; founded by the Roman emperor Hadrian on the site of a previous Thracian settlement named Uskudama)[4] is a city in Turkey, in the northwestern province of Edirne and East Thrace, close to Turkey's borders with Greece and Bulgaria (3.24 miles or 5.22 kilometers from the Greek border at the closest point).[5] Edirne was the capital city of the Ottoman Empire from 1369 to 1453,[6] before Constantinople became the empire's capital. The estimated population in 2019 was 185,408. 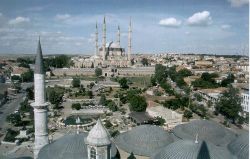 Selimiye Mosque exterior. Sinan the Architect called the Şezade Mosque in Istanbul his apprentice work, the Süleymaniye his journeyman’s work, and the Selimiye his masterpiece. He was 85 when he finished it.

The area around Edirne has been the site of numerous major battles and sieges, from the days of the Roman Empire. The vagaries of the border region between Asia and Europe gives rise to Edirne's historic claim to be the most frequently contested spot on the globe.[7]

The city was refounded by the Roman Emperor Hadrian on the site of a previous Thracian settlement known as Uskadama, Uskudama, Uskodama or Uscudama.[4] Hadrian developed it, adorned it with monuments, and changed its name to Hadrianopolis (which would later be pronounced Adrianopolis, Anglicised as Adrianople). Licinius was defeated there by Constantine I in 324, and Emperor Valens was killed by the Goths there during the Battle of Adrianople in 378.

In 813, the city was temporarily seized by Khan Krum of Bulgaria who moved its inhabitants to the Bulgarian lands north of the Danube.[8]

During the existence of the Latin Empire of Constantinople, the Crusaders were decisively defeated by the Bulgarian Emperor Kaloyan in the Battle of Adrianople (1205). In 1206 Adrianople and its territory was given to the Byzantine aristocrat Theodore Branas as a hereditary fief by the Latin regime.[9] Theodore Komnenos, Despot of Epirus, took possession of it in 1227, but three years later was defeated at Klokotnitsa by Emperor Ivan Asen II of Bulgaria.

In 1362, the Ottoman Empire under Sultan Murad I invaded Thrace. Murad captured Adrianople, probably in 1369 (the date is disputed). The city became "Edirne" in Turkish, reflecting the Turkish pronunciation.[10] Murad moved the Ottoman capital to Adrianople. Mehmed the Conqueror (Sultan Mehmed II) was born in Adrianople, where he came under the influence of some Hurufis dismissed by Taşköprüzade in the Şakaiki Numaniye as "Certain accursed ones of no significance", who were burnt as heretics by Mahmud Pasha.[11]

The city remained the Ottoman capital for 84 years until 1453, when Mehmed II took Constantinople (present-day Istanbul) and moved the capital there.

Edirne is famed for its many mosques, domes, minarets, and palaces from the Ottoman period.

Edirne in the first quarter of the 20th century.

Under Ottoman rule, Adrianople was the principal city of the administrative unit, the eponymous Eyalet of Adrianople, and after land reforms in 1867, the Vilayet of Adrianople.

Sultan Mehmed IV left the palace in Constantinople and died in Adrianople in 1693.

During his exile in the Ottoman Empire, the Swedish king Charles XII stayed in the city during most of 1713.[12]

Baháʼu'lláh, the founder of the Baháʼí Faith, lived in Edirne from 1863 to 1868. He was exiled there by the Ottoman Empire before being banished further to the Ottoman penal colony in Akka. He referred to Adrianople in his writings as the "Land of Mystery".[13]

Adrianople was a sanjak centre during the Ottoman period and was bound to, successively, the Rumeli Eyalet and Silistre Eyalet before becoming a provincial capital of the Eyalet of Edirne at the beginning of the 19th century; until 1878, the Eyalet of Adrianople comprised the sanjaks of Edirne, Tekfurdağı, Gelibolu, Filibe, and İslimye.

Adrianople was a vital fortress defending Ottoman Constantinople and Eastern Thrace during the Balkan Wars of 1912–13. It was briefly occupied by the Bulgarians in 1913, following the Siege of Adrianople. The Great Powers–Britain, Italy, France, and Russia–attempted to coerce the Ottoman Empire into ceding Adrianople to Bulgaria during the temporary winter truce of the First Balkan War. The belief that that government was willing to give up the city created a political scandal in the Ottoman government in Constantinople (as Adrianople was a former capital of the Empire), leading to the 1913 Ottoman coup d'état. Although it was victorious in the coup, the Committee of Union and Progress under Enver Pasha was unable to stop the Bulgarians from capturing the city after the fighting resumed in the Spring. Despite relentless pressure from the Great powers (Russia, Britain, France) the Ottoman empire never officially ceded the city to Bulgaria. Edirne was swiftly reconquered by the Ottoman empire during the Second Balkan War under the leadership of Enver Pasha (who would proclaim himself the "second conqueror of Adrianople", after Murad I) following the total collapse of the Bulgarian military might in the region.

The entire Armenian population of the city was deported during the Armenian genocide on 27–28 October 1915 and 17–18 February 1916, ending up in Syria and Mesopotamia. Their property and businesses were sold at low prices to Turkish Muslims.[14]

It was ceded to Greece by the Treaty of Sèvres in 1920, but recaptured and annexed by Turkey after the decisive Greek defeat at the end of the Greco-Turkish War, also known as the Western Front of the larger Turkish War of Independence, in 1922. During the Greek administration, Edirne (officially known as Adrianople) was the capital of the Adrianople Prefecture.

Adrianople became known in Western languages as "Edirne" circa 1930.[15] From 1934 onwards Edirne was the seat of the Second Inspectorate General, in which an Inspector General governed the provinces Edirne, Çanakkale, Tekirdaĝ and Kırklareli.[16] The Inspectorate Generals governmental posts were abandoned in 1948,[17] but the legal framework of them was only abolished in 1952, under the government of the Democrat Party.[18]

According to the 2007 census, Edirne Province had a population of 382,222 inhabitants. The city is a commercial centre for woven textiles, silks, carpets and agricultural products.

Panoramic view of the city from جامع السليمية.