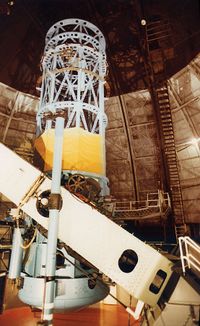 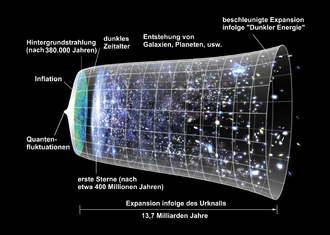 Three steps to the Hubble constant[5]

A decade before Hubble made his observations, a number of physicists and mathematicians had established a consistent theory of an expanding universe by using Einstein's field equations of general relativity. Applying the most general principles to the nature of the universe yielded a dynamic solution that conflicted with the then-prevalent notion of a static universe.

After Hubble's discovery was published, Albert Einstein abandoned his work on the cosmological constant, which he had designed to modify his equations of general relativity to allow them to produce a static solution, which he thought was the correct state of the universe. The Einstein equations in their simplest form model generally either an expanding or contracting universe, so Einstein's cosmological constant was artificially created to counter the expansion or contraction to get a perfect static and flat universe.[8] After Hubble's discovery that the universe was, in fact, expanding, Einstein called his faulty assumption that the universe is static his "biggest mistake".[8] On its own, general relativity could predict the expansion of the universe, which (through observations such as the bending of light by large masses, or the precession of the orbit of Mercury) could be experimentally observed and compared to his theoretical calculations using particular solutions of the equations he had originally formulated.

In 1931, Einstein made a trip to Mount Wilson Observatory to thank Hubble for providing the observational basis for modern cosmology.[9]

The cosmological constant has regained attention in recent decades as a hypothesis for dark energy.[10]

A variety of possible recessional velocity vs. redshift functions including the simple linear relation v = cz; a variety of possible shapes from theories related to general relativity; and a curve that does not permit speeds faster than light in accordance with special relativity. All curves are linear at low redshifts. See Davis and Lineweaver.[11]

The discovery of the linear relationship between redshift and distance, coupled with a supposed linear relation between recessional velocity and redshift, yields a straightforward mathematical expression for Hubble's law as follows:

For distances D larger than the radius of the Hubble sphere rHS , objects recede at a rate faster than the speed of light (See Uses of the proper distance for a discussion of the significance of this):

Since the Hubble "constant" is a constant only in space, not in time, the radius of the Hubble sphere may increase or decrease over various time intervals. The subscript '0' indicates the value of the Hubble constant today.[12] Current evidence suggests that the expansion of the universe is accelerating (see Accelerating universe), meaning that for any given galaxy, the recession velocity dD/dt is increasing over time as the galaxy moves to greater and greater distances; however, the Hubble parameter is actually thought to be decreasing with time, meaning that if we were to look at some fixed distance D and watch a series of different galaxies pass that distance, later galaxies would pass that distance at a smaller velocity than earlier ones.[13]

We now define the Hubble constant as

The age and ultimate fate of the universe can be determined by measuring the Hubble constant today and extrapolating with the observed value of the deceleration parameter, uniquely characterized by values of density parameters (ΩM for matter and ΩΛ for dark energy). A "closed universe" with ΩM > 1 and ΩΛ = 0 comes to an end in a Big Crunch and is considerably younger than its Hubble age. An "open universe" with ΩM ≤ 1 and ΩΛ = 0 expands forever and has an age that is closer to its Hubble age. For the accelerating universe with nonzero ΩΛ that we inhabit, the age of the universe is coincidentally very close to the Hubble age.

In a universe with a deceleration parameter equal to zero, it follows that H = 1/t, where t is the time since the Big Bang. A non-zero, time-dependent value of   simply requires integration of the Friedmann equations backwards from the present time to the time when the comoving horizon size was zero.

The expansion of space summarized by the Big Bang interpretation of Hubble's law is relevant to the old conundrum known as Olbers' paradox: If the universe were infinite in size, static, and filled with a uniform distribution of stars, then every line of sight in the sky would end on a star, and the sky would be as bright as the surface of a star. However, the night sky is largely dark.[14][15]

Since the 17th century, astronomers and other thinkers have proposed many possible ways to resolve this paradox, but the currently accepted resolution depends in part on the Big Bang theory, and in part on the Hubble expansion: In a universe that exists for a finite amount of time, only the light of a finite number of stars has had enough time to reach us, and the paradox is resolved. Additionally, in an expanding universe, distant objects recede from us, which causes the light emanated from them to be redshifted and diminished in brightness by the time we see it.[14][15]

Instead of working with Hubble's constant, a common practice is to introduce the dimensionless Hubble constant, usually denoted by h, and to write Hubble's constant H0 as h × 100 km s−1 Mpc−1, all the relative uncertainty of the true value of H0 being then relegated to h.[16] The dimensionless Hubble constant is often used when giving distances that are calculated from redshift z using the formula d ≈ c/H0 × z. Since H0 is not precisely known, the distance is expressed as:

In other words, one calculates 2998×z and one gives the units as   or

Occasionally a reference value other than 100 may be chosen, in which case a subscript is presented after h to avoid confusion; e.g. h70 denotes   km s−1 Mpc−1, which implies  .

This should not be confused with the dimensionless value of Hubble's constant, usually expressed in terms of Planck units, obtained by multiplying H0 by 1.75 × 10−63 (from definitions of parsec and tP), for example for H0=70, a Planck unit version of 1.2 × 10−61 is obtained.

so   Also, by definition,

If dark energy does not have a constant equation-of-state w, then

and to solve this we must parametrize  , for example if  , giving

Multiple methods have been used to determine the Hubble constant. "Late universe" measurements using calibrated distance ladder techniques have converged on a value of approximately 73 كم/ثا/مج.فخ. Since 2000, "early universe" techniques based on measurements of the cosmic microwave background have become available, and these agree on a value near 67.7 كم/ثا/مج.فخ. (This is accounting for the change in the expansion rate since the early universe, so is comparable to the first number.) As techniques have improved, the estimated measurement uncertainties have shrunk, but the range of measured values has not, to the point that the disagreement is now statistically significant. This discrepancy is called the Hubble tension.[20][21]

اعتبارا من 2020[تحديث], the cause of the discrepancy is not understood. In April 2019, astronomers reported further substantial discrepancies across different measurement methods in Hubble constant values, possibly suggesting the existence of a new realm of physics not currently well understood.[22][23][24][25][26] By November 2019, this tension had grown so far that some physicists like Joseph Silk had come to refer to it as a "possible crisis for cosmology", as the observed properties of the universe appear to be mutually inconsistent.[27] In February 2020, the Megamaser Cosmology Project published independent results that confirmed the distance ladder results and differed from the early-universe results at a statistical significance level of 95%.[28] In July 2020, measurements of the cosmic background radiation by the Atacama Cosmology Telescope predict that the Universe should be expanding more slowly than is currently observed.[29]

Estimated values of the Hubble constant, 2001–2020. Estimates in black represent calibrated distance ladder measurements which tend to cluster around 73 كم/ثا/مج.فخ; red represents early universe CMB/BAO measurements with ΛCDM parameters which show good agreement on a figure near 67 كم/ثا/مج.فخ, while blue are other techniques, whose uncertainties are not yet small enough to decide between the two.