الزُرَيْعة cultivar هي نوع من النبات that people have bred for desired traits, which are reproduced in each new generation by a method such as grafting, tissue culture or carefully controlled seed production. Most cultivars arise from purposeful human manipulation, but some originate from wild plants that have distinctive characteristics. Cultivar names are chosen according to rules of the International Code of Nomenclature for Cultivated Plants (ICNCP), and not all cultivated plants qualify as cultivars. Horticulturists generally believe the word cultivar[nb 1] was coined as a term which means "cultivated variety". 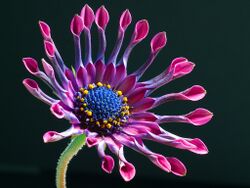 Popular ornamental garden plants like roses, camellias, daffodils, rhododendrons, and azaleas are commonly cultivars produced by breeding and selection or as sports, for floral colour or size, plant form, or other desirable characteristics.[1] Similarly, the world's agricultural food crops are almost exclusively cultivars that have been selected for characters such as improved yield, flavour, and resistance to disease, and very few wild plants are now used as food sources. Trees used in forestry are also special selections grown for their enhanced quality and yield of timber.

Cultivars form a major part of Liberty Hyde Bailey's broader group, the cultigen,[2] which is defined as a plant whose origin or selection is primarily due to intentional human activity.[3] A cultivar is not the same as a botanical variety,[4] which is a taxonomic rank below subspecies, and there are differences in the rules for creating and using the names of botanical varieties and cultivars. In recent times, the naming of cultivars has been complicated by the use of statutory patents for plants and recognition of plant breeders' rights.[5]

The International Union for the Protection of New Varieties of Plants (UPOV – فرنسية: Union internationale pour la protection des obtentions végétalescode: fr is deprecated ) offers legal protection of plant cultivars to persons or organisations that introduce new cultivars to commerce. UPOV requires that a cultivar be "distinct, uniform", and "stable". To be "distinct", it must have characters that easily distinguish it from any other known cultivar. To be "uniform" and "stable", the cultivar must retain these characters in repeated propagation.

المقالة الرئيسية: Cultigen
Bread wheat, Triticum aestivum, is considered a cultigen, and is a distinct species from other wheats according to the biological species concept. Many different cultivars have been created within this cultigen. Many other cultigens are not considered to be distinct species, and can be denominated otherwise.

A cultivar is an assemblage of plants that (a) has been selected for a particular character or combination of characters, (b) is distinct, uniform and stable in those characters, and (c) when propagated by appropriate means, retains those characters.[10]

A cultivar of the orchid genus Oncidium

Which plants are chosen to be named as cultivars is simply a matter of convenience as the category was created to serve the practical needs of horticulture, agriculture, and forestry.[11]

Genetically modified plants with characteristics resulting from the deliberate implantation of genetic material from a different germplasm may form a cultivar. However, the International Code of Nomenclature for Cultivated Plants notes, "In practice such an assemblage is often marketed from one or more lines or multilines that have been genetically modified. These lines or multilines often remain in a constant state of development which makes the naming of such an assemblage as a cultivar a futile exercise."[12] However, retired transgenic varieties such as the fish tomato, which are no longer being developed, do not run into this obstacle and can be given a cultivar name.

Cultivars may be selected because of a change in the ploidy level of a plant which may produce more desirable characteristics.

Viola 'Clear Crystals Apricot'
The specific epithet may be omitted from a cultivar name.

Every unique cultivar has a unique name within its denomination class (which is almost always the genus). Names of cultivars are regulated by the International Code of Nomenclature for Cultivated Plants, and may be registered with an International Cultivar Registration Authority (ICRA). There are sometimes separate registration authorities for different plant types such as roses and camellias. In addition, cultivars may be associated with commercial marketing names referred to in the Cultivated Plant Code as "trade designations" (see below).

An International Cultivar Registration Authority (ICRA) is a voluntary, non-statutory organization appointed by the Commission for Nomenclature and Cultivar Registration of the International Society of Horticultural Science. ICRAs are generally formed by societies and institutions specializing in particular plant genera such as Dahlia or Rhododendron and are currently located in Europe, North America, China, India, Singapore, Australia, New Zealand, South Africa and Puerto Rico.[13]