المسيح في اليهودية (بالعبرية: מָשִׁיחַcode: he is deprecated ‎ (Mashiach)) is a savior and liberator figure in Jewish eschatology, who is believed to be the future redeemer of the Jewish people. The concept of messianism originated in Judaism,[1][2] and in the Hebrew Bible a messiah is a king or High Priest traditionally anointed with holy anointing oil.[3] However, messiahs were not exclusively Jewish, as the Hebrew Bible refers to Cyrus the Great, king of Persia, as a messiah[4] for his decree to rebuild the Jerusalem Temple. 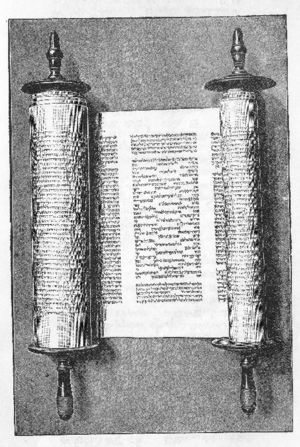 In Jewish eschatology, the Messiah is a future Jewish king from the Davidic line, who is expected to be anointed with holy anointing oil and rule the Jewish people during the Messianic Age and world to come.[1][2][5] The Messiah is often referred to as "King Messiah" (بالعبرية: מלך משיחcode: he is deprecated ‎) or malka meshiḥa in Aramaic.[6]

In Jewish eschatology, the term mashiach, or "Messiah", refers specifically to a future Jewish king from the Davidic line, who is expected to save the Jewish nation, and will be anointed with holy anointing oil and rule the Jewish people during the Messianic Age.[1][2][5][web 1] The Messiah is often referred to as "King Messiah", or, in Hebrew, מלך משיחcode: he is deprecated (melekh mashiachcode: he is deprecated ), and, in Aramaic, malka meshiḥa.[6] In a generalized sense, messiah has "the connotation of a savior or redeemer who would appear at the end of days and usher in the kingdom of God, the restoration of Israel, or whatever dispensation was considered to be the ideal state of the world."[web 1]

Messianism "denotes a movement, or a system of beliefs and ideas, centered on the expectation of the advent of a messiah."[web 1] Orthodox views hold that the Messiah will be descended from his father through the line of King David,[9] and will gather the Jews back into the Land of Israel, usher in an era of peace, build the Third Temple, father a male heir,[بحاجة لمصدر] re-institute the Sanhedrin, and so on.

Belief in the future advent of the Messiah is one of the fundamental requisites of the Jewish faith, concerning which Maimonides has written: "Anyone who does not believe in him, or who does not wait for his arrival, has not merely denied the other prophets, but has also denied the Torah and Moses, our Rabbi."[14]

Early in the Second Temple period hopes for a better future are described in the Jewish scriptures.[web 1] After the return from the Babylonian exile, the Persian king Cyrus the Great was called "messiah" in Isaiah, due to his role in the return of the Jewish exiles.[web 1]

A number of messianic ideas developed during the later Second Temple period, ranging from this-worldly, political expectations, to apocalyptic expectations of an endtime in which the dead would be resurrected and the Kingdom of Heaven would be established on earth.[web 1] The Messiah might be a kingly "Son of David," or a more heavenly "Son of Man", but "Messianism became increasingly eschatological, and eschatology was decisively influenced by apocalypticism", while "messianic expectations became increasingly focused on the figure of an individual savior."[web 1] According to Zwi Werblowsky, "the Messiah no longer symbolized the coming of the new age, but he was somehow supposed to bring it about." The "Lord's anointed" thus became the "savior and redeemer" and the focus of more intense expectations and doctrines."[web 1] Messianic ideas developed both by new interpretations (pesher, midrash) of the Jewish scriptures, but also by visionary revelations.[web 1]

Religious views on whether Hebrew Bible passages refer to a Messiah may vary among scholars of ancient Israel, looking at their meaning in their original contexts, and among rabbinical scholars.[web 6] The reading of messianic attestations in passages from Isaiah, Jeremiah and Ezekiel is anachronistic, because messianism developed later than these texts.[web 6][web 1] According to James C. VanderKam, there are no Jewish texts before the 2nd century BCE which mention a messianic leader, though some terms point in this direction, and some terms, such as the suffering servant from Isaiah, were later interpreted as such.[15]

According to Zwi Werblowsky, the brutal regime of Hellenistic Greek Seleucid king Antiochus IV (r. 175–163 BCE) led to renewed messianic expectations, as reflected in the Book of Daniel.[web 1] His rule was ended by the Maccabean Revolt (167-160 BCE), and the installment of the Hasmonean dynasty (167-37 BCE). The Maccabees ruled Judea semi-independently from the Seleucid Empire from 167-110 BCE, fully independently from 110-63 BCE, and as a Roman client state from 63-37 BCE, when Herod the Great came to power. With the end of the Hasmonean dynasty, the belief in a messianic leader further developed.[web 6] According to James C. VanderKam, the apocalyptic genre shows a negative attitude towards the foreign powers which ruled Judea, but rejection of these powers was not the only cause of the development of the apocalyptic genre.[16]

According to VanderKam, "the vast majority of Second Temple texts have no reference to a messianic leader of the endtime."[17] The Animal Apocalypse (c. 160 BCE) is the first to do so, but after that time, only some apocalypses, and some texts which are not apocalypses but do contain apocalyptic or eschatological teachings, refer to a messianic leader.[18] According to VanderKam, the lack of messianic allusions may be explained by the fact that Judea was governed for centuries by foreign powers, often without great problems, or a negative stance by Jews toward these Gentile powers.[16]

In the first millennium BCE, in the Qumran texts, the Psalms of Solomon, and the Similitudes of Enoch, "both foreign and native rulers are castigated and hopes are placed on a Messiah (or Messiahs) who will end the present evil age of injustice.[16] After the First Jewish–Roman War (66-70 CE), texts like 2 Baruch and 4 Ezra reflect the despair of the time.[16] The images and status of the messiah in the various texts are quite different, but the apocalyptic messiahs are only somewhat more exalted than the leaders portrayed in the non-apocalyptic texts.[19]

Charleswoth notes that messianic concepts are found in the Old Testament pseudepigrapha, which include a large number of Apocalypses.[note 1]

The Book of Daniel (mid-2nd c. BCE) was quoted and referenced by both Jews and Christians in the 1st century CE as predicting the imminent end-time.[20] The concepts of immortality and resurrection, with rewards for the righteous and punishment for the wicked, have roots much deeper than Daniel, but the first clear statement is found in the final chapter of that book: "Many of those who sleep in the dust of the earth shall awake, some to everlasting life, and some to everlasting shame and contempt."[21] Without this belief, Christianity, in which the resurrection of Jesus plays a central role, would have disappeared, like the movements following other charismatic Jewish figures of the 1st century.[22]

The Book of Enoch (1 Enoch,[note 2] 3rd-1st c. BCE) is an ancient Jewish apocalyptic religious work, ascribed by tradition to Enoch, the great-grandfather of Noah.[23][24] Enoch contains a prophetic exposition of the thousand-year reign of the Messiah. The older sections (mainly in the Book of the Watchers) of the text are estimated to date from about 300 BCE, while the latest part (Book of Parables) probably to the 1st century BCE.[25]

1 Enoch is the first text to contain the idea of a preexistent heavenly Messiah, called the "Son of Man."[web 6] 1 Enoch, and also 4 Ezra, transform the expectation of a kingly Messiah of Daniel 7 into "an exalted, heavenly messiah whose role would be to execute judgment and to inaugurate a new age of peace and rejoicing."[26] He is described as an angelic being,[web 6][27] who "was chosen and hidden with God before the world was created, and will remain in His presence forevermore."[web 6] He is the embodiment of justice and Wisdom, seated on a throne in Heaven, who will be revealed to the world at the end of times, when he will judge all beings.[web 6][27]

1 Enoch was influential in molding New Testament doctrines about the Messiah, the Son of Man, the messianic kingdom, Christian demonology, the resurrection, and Christian eschatology.[24][28]

VanderKam further notes that a variety of titles are being used for the Messiah(s) in the Dead Sea Scrolls:[29]

Messianic allusions to some figures include to Menahem ben Hezekiah who traditionally was born on the same day that the Second Temple was destroyed.[30]

Christianity started as a messianic Jewish sect. Most of Jesus's teachings were intelligible and acceptable in terms of Second Temple Judaism; what set the followers of Jesus apart from other Jews was their faith in Jesus as the resurrected messiah.[31] While ancient Judaism acknowledged multiple messiahs, the two most relevant being the Messiah ben Joseph and the traditional Messiah ben David, Christianity acknowledges only one ultimate Messiah. Jesus would have been viewed by many as one or both.[10][11][12][13] According to Larry Hurtado, "the christology and devotional stance that Paul affirmed (and shared with others in the early Jesus-movement) was not a departure from or a transcending of a supposedly monochrome Jewish messianism, but, instead, a distinctive expression within a variegated body of Jewish messianic hopes."[32]

Rejection of Jesus as the Messiah

According to Maimonides, Jesus was the most influential, and consequently, the most damaging of all false messiahs.[33] However, since the traditional Jewish belief is that the messiah has not yet come and the Messianic Age is not yet present, the total rejection of Jesus as either messiah or deity has never been a central issue for Judaism.

Judaism has never accepted any of the claimed fulfillments of prophecy that Christianity attributes to Jesus. Judaism forbids the worship of a person as a form of idolatry, since the central belief of Judaism is the absolute unity and singularity of God.[34][note 3] Jewish eschatology holds that the coming of the Messiah will be associated with a specific series of events that have not yet occurred, including the return of Jews to their homeland and the rebuilding of The Temple, a Messianic Age of peace[35] and understanding during which "the knowledge of God" fills the earth."[36] And since Jews believe that none of these events occurred during the lifetime of Jesus (nor have they occurred afterwards), he was not the Messiah.

Traditional views of Jesus have been mostly negative (see: Toledot Yeshu, an account that portrays Jesus as an impostor), although in the Middle Ages Judah Halevi and Maimonides viewed Jesus as an important preparatory figure for a future universal ethical monotheism of the Messianic Age. Some modern Jewish thinkers, starting in the 18th century with the Orthodox Jacob Emden and the reformer Moses Mendelssohn, have sympathetically argued that the historical Jesus may have been closer to Judaism than either the Gospels or traditional Jewish accounts would indicate.

The Talmud extensively discusses the coming of the Messiah (Sanhedrin 98a–99a, et al.) and describes a period of freedom and peace, which will be the time of ultimate goodness for the Jews. Tractate Sanhedrin contains a long discussion of the events leading to the coming of the Messiah.[note 4] The Talmud tells many stories about the Messiah, some of which represent famous Talmudic rabbis as receiving personal visitations from Elijah the Prophet and the Messiah.[note 5]

According to the Talmud,[38] the Midrash,[39] and the Zohar,[40] the 'deadline' by which the Messiah must appear is 6000 years from creation (approximately the year 2240 in the Gregorian calendar, though calculations vary).[note 6] Elaborating on this theme are numerous early and late Jewish scholars, including the Ramban,[44] Isaac Abrabanel,[45] Abraham Ibn Ezra,[46] Rabbeinu Bachya,[47] the Vilna Gaon,[48] the Lubavitcher Rebbe,[49] the Ramchal,[50] Aryeh Kaplan,[51] and Rebbetzin Esther Jungreis.[52]