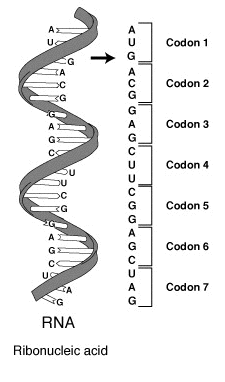 A series of codons in part of a mRNA molecule. Each codon consists of three nucleotides, usually representing a single amino acid.

Subsequent work by هار گوبـِند خورانا identified the rest of the code, and shortly thereafter Robert W. Holley determined the structure of transfer RNA, the adapter molecule that facilitates translation. This work was based upon earlier studies by Severo Ochoa, who received the Nobel prize in 1959 for his work on the enzymology of RNA synthesis. In 1968, Khorana, Holley and Nirenberg also received جائزة نوبل في الفسيولوجيا أو الطب لعملهم.

جينوم أي عضية is inscribed in دنا, or in some viruses RNA. The portion of the genome that codes for a protein or an RNA is referred to as a مورثة. Those genes that code for proteins are composed of tri-nucleotide units called codons, each coding for a single amino acid. Each nucleotide sub-unit consists of a فوسفات, deoxyribose sugar and one of the 4 nitrogenous nucleotide bases. The پيورين bases أدينين (A) وجوانين (G) هم أكبر ويتكونون من 2 حلقة عطرية The pyrimidine bases cytosine (C) and thymine (T) هم أصغرويتكونون من حلقة عطرية واحدة فقط . In the double-helix configuration, two strands of DNA ويرتبطون ببعضهم بواسطة رابطة هيدروجين بترتيب يطلق عليه base pairing. هذه الروابط دائما تكون بين adenine base on one strand and a thymine على الآخر strand و بين a cytosine base on one strand and a guanine base on the other. This means that the number of A and T residues will be the same in a given double helix, as will the number of G and C residues. In RNA, thymine (T) is replaced by uracil (U), and the deoxyribose is substituted by ribose. كل جين(كود أو شفرة)مرمزة البروتين هو transcribed الى قالب جزيئ لل polymer RNA المقابل يعرف بالرنا الرسول messenger RNA ormRNA]] هو بدوره translated على ال ribosome into an amino acid chain or polypeptide. إن عملية الترجمة تتطلب transfer RNAs المحدد لكل حمض نووى مع كل حمض نووى ملتصق بهمguanosine triphosphate كمصدر للطاقة,and a number of transla factors tRNAs have anticodons complementary to the codons in mRNA and can be charged covalently with [[amino acids] at their 3' terminal CCA ends. Individual tRNAs are charge with specific amino acids by enzymes known as aminoacyl tRNA synthetases, which have high specificity for both their cognate amino acids and tRNAs. The high specificity of these enzymes is a major reason why the fidelity of protein translation is maintained

are 4³ = 64 different codon combinations possible with a triplet codon of three nucleotides. In reality, all 64 codons of the standard genetic code are assigned for either amino acids or stop signals during translation. If, for example, an RNA sequence, UUUAAACCC is considered and the reading-frame starts with the first U (by convention, 5' to 3'), there are three codons, namely, UUU, AAA and CCC, each of which specifies one amino acid. This RNA sequence will be translated into an amino acid sequence, three amino acids long. A comparison may be made with computer science, where the codon is the equivalent of a word, which is the standard "chunk" for handling data (like one amino acid of a protein), and a nucleotide for a bit.

The standard genetic code is shown in the following tables. Table 1 shows what amino acid each of the 64 codons specifies. Table 2 shows what codons specify each of the 20 standard amino acids involved in translation. These are called forward and reverse codon tables, respectively. For example, the codon AAU represents the amino acid asparagine, and UGU and UGC represent cysteine (standard three-letter designations, Asn and Cys, respectively).

Reading frame of a sequence

Note that a codon is defined by the initial nucleotide from which translation starts. For example, the string GGGAAACCC, if read from the first position, contains the codons GGG, AAA and CCC; and, if read from the second position, it contains the codons GGA and AAC; if read starting from the third position, GAA and ACC. Partial codons have been ignored in this example. Every sequence can thus be read in three reading frames, each of which will produce a different amino acid sequence (in the given example, Gly-Lys-Pro, Gly-Asp, or Glu-Thr, respectively). With double-stranded DNA there are six possible reading frames, three in the forward orientation on one strand and three reverse (on the opposite strand).

The actual frame in which a protein sequence is translated is defined by a start codon, usually the first AUG codon in the mRNA sequence. Mutations that disrupt the reading frame by insertions or deletions of a non-multiple of 3 nucleotide bases are known as frameshift mutations. These mutations may impair the function of the resulting protein, if it is formed, and are thus rare in in vivo protein-coding sequences. Often such misformed proteins are targeted for proteolytic degradation. In addition, a frame shift mutation is very likely to cause a stop codon to be read, which truncates the creation of the protein (example [2]). One reason for the rareness of frame-shifted mutations' being inherited is that, if the protein being translated is essential for growth under the selective pressures the organism faces, absence of a functional protein may cause lethality before the organism is viable.

Translation starts with a chain initiation codon (start codon). Unlike stop codons, the codon alone is not sufficient to begin the process. Nearby sequences (Such as the Shine-Dalgarno sequence in E.Coli) and initiation factors are also required to start translation. The most common start codon is AUG, which also codes for methionine. There are sometimes other alternative start codons (depending on the organism), such as "UUG," which normally codes for leucine. However, when used as a start codon, these alternative start codons are usually translated as methionine (regardless of their normal meaning).[3]

The three stop codons have been given names: UAG is amber, UGA is opal (sometimes also called umber), and UAA is ochre. "Amber" was named by discoverers Richard Epstein and Charles Steinberg after their friend Harris Bernstein, whose last name means "amber" in German. The other two stop codons were named 'ochre" and "opal" in order to keep the "color names" theme. Stop codons are also called termination codons and they signal release of the nascent polypeptide from the ribosome due to binding of release factors in the absence of cognate tRNAs with anticodons complementary to these stop signals.[4]

Degeneracy of the genetic code

Degeneracy results because a triplet code designates 20 amino acids and a stop codon. Because there are four bases, triplet codons are required to produce at least 21 different codes. For example, if there were two bases per codon, then only 16 amino acids could be coded for (4²=16). Because at least 21 codes are required, then 4³ gives 64 possible codons, meaning that some degeneracy must exist.

A practical consequence of redundancy is that some errors in the genetic code only cause a silent mutation or an error that would not affect the protein because the hydrophilicity or hydrophobicity is maintained by equivalent substitution of amino acids; for example, a codon of NUN (where N = any nucleotide) tends to code for hydrophobic amino acids. NCN yields amino acid residues that are small in size and moderate in hydropathy; NAN encodes average size hydrophilic residues; UNN encodes residues that are not hydrophilic.[5][6] These tendencies may result from that the aminoacyl tRNA synthetases related the such codons share a common ancestry.

Even so, single point mutations can still cause dysfunctional proteins. For example, a mutated hemoglobin gene causes sickle-cell disease. In the mutant hemoglobin a hydrophilic glutamate (Glu) is substituted by the hydrophobic valine (Val), which reduces the solubility of β-globin. In this case, this mutation causes hemoglobin to form linear polymers linked by the hydrophobic interaction between the valine groups causing sickle-cell deformation of erythrocytes. Sickle-cell disease is generally not caused by a de novo mutation. Rather it is selected for in malarial regions (in a way similar to thalassemia), as heterozygous people have some resistance to the malarial Plasmodium parasite (heterozygote advantage).

These variable codes for amino acids are allowed because of modified bases in the first base of the anticodon of the tRNA, and the base-pair formed is called a wobble base pair. The modified bases include inosine and the Non-Watson-Crick U-G basepair.

While slight variations on the standard code had been predicted earlier,[7] none were discovered until 1979, when researchers studying human mitochondrial genes discovered they used an alternative code. Many slight variants have been discovered since,[8] including various alternative mitochondrial codes,[9] as well as small variants such as Mycoplasma translating the codon UGA as tryptophan. In bacteria and archaea, GUG and UUG are common start codons. However, in rare cases, certain specific proteins may use alternative initiation (start) codons not normally used by that species.[10]

In certain proteins, non-standard amino acids are substituted for standard stop codons, depending upon associated signal sequences in the messenger RNA: UGA can code for selenocysteine and UAG can code for pyrrolysine as discussed in the relevant articles. Selenocysteine is now viewed as the 21st amino acid, and pyrrolysine is viewed as the 22nd. A detailed description of variations in the genetic code can be found at the NCBI web site.

Notwithstanding these differences, all known codes have strong similarities to each other, and the coding mechanism is the same for all organisms: three-base codons, tRNA, ribosomes, reading the code in the same direction and translating the code three letters at a time into sequences of amino acids.

Despite the variations that exist, the genetic codes used by all known forms of life on Earth are very similar. Since there are many possible genetic codes that are thought to have similar utility to the one used by Earth life, the theory of evolution suggests that the genetic code was established very early in the history of life. Phylogenetic analysis of transfer RNA suggests that tRNA molecules evolved before the present set of aminoacyl-tRNA synthetases.[11]

The genetic code is not a random assignment of codons to amino acids.[12] For example, amino acids that share the same biosynthetic pathway tend to have the same first base in their codons,[13] and amino acids with similar physical properties tend to have similar codons.[14][15]

There are three themes running through the many theories that seek to explain the evolution of the genetic code (and hence the origin of these patterns).[16]: