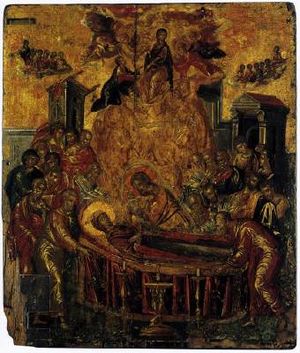 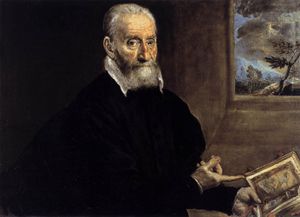 Portrait of Giorgio Giulio Clovio, the earliest surviving portrait from El Greco (c. 1570, oil on canvas, 58 × 86 cm, Museo di Capodimonte, Naples). In the portrait of Clovio, friend and supporter in Rome of the young Cretan artist, the first evidence of El Greco's gifts as a portraitist are apparent. 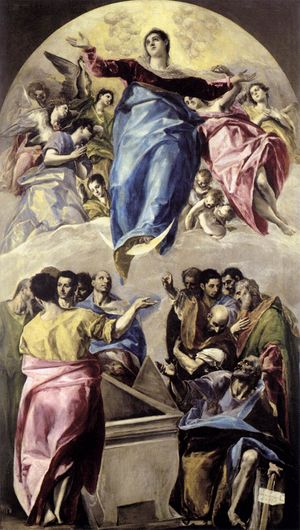 The Assumption of the Virgin (1577-1579, oil on canvas, 401 × 228 cm, Art Institute of Chicago) was one of the nine paintings El Greco completed for the church of Santo Domingo el Antiguo in Toledo, his first commission in Spain. 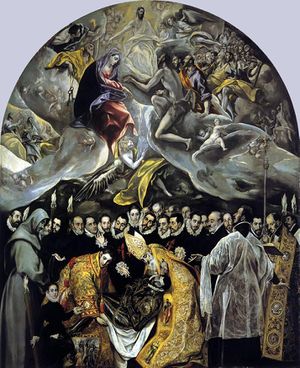 The Burial of Count Orgaz (1586-1588, oil on canvas, 480 × 360 cm, Santo Tomé, Toledo), now El Greco's best known work, illustrates a popular local legend. An exceptionally large painting, it is clearly divided into two zones: the heavenly above and the terrestrial below, brought together compositionally.

للمزيد من المعلومات: أعمال إل گريكو
The Modena Triptych (1568, tempera on panel, 37 × 23,8 cm (central), 24 × 18 cm (side panels), Galleria Estense, Modena) is a small-scale composition attributed to El Greco.
«Δομήνικος Θεοτοκόπουλος (Doménicos Theotocópoulos) ἐποία». The words El Greco used to sign his paintings. El Greco appended after his name the word "epoia" (ἐποία, "he made it"). In The Assumption the painter used the word "deixas" (δείξας, "he displayed it") instead of "epoia".

a. ^  Theotocópoulos acquired the name "El Greco" in Italy, where the custom of identifying a man by designating a country or city of origin was a common practice. The curious form of the article (El) may be from the Venetian dialect or more likely from the Spanish, though in Spanish his name would be "El Griego".[4] The Cretan master was generally known in Italy and Spain as Dominico Greco, and was called only after his death El Greco.[5]

b. ^  According to a contemporary, El Greco acquired his name, not only for his place of origin, but also for the sublimity of his art: "Out of the great esteem he was held in he was called the Greek (il Greco)" (comment of Giulio Cesare Mancini about El Greco in his Chronicles, which were written a few years after El Greco's death).[6]

c. ^  There is an ongoing dispute about El Greco's birthplace. Most researchers and scholars give Candia as his birthplace.[7] Nonetheless, according to Achileus A. Kyrou, a prominent Greek journalist of the 20th century, El Greco was born in Fodele and the ruins of his family's house are still extant in the place where old Fodele was (the village later changed location because of the raids of the pirates).[8] Candia's claim to him is based on two documents from a trial in 1606, when the painter was 65. Fodele natives argue that El Greco probably told everyone in Spain he was from Heraklion because it was the closest known city next to tiny Fodele[9]

d. ^  This document comes from the notarial archives of Candia and was published in 1962.[10] Menegos is the Venetian dialect form of Doménicos, and Sgourafos (σγουράφος=ζωγράφος) is a Greek term for painter.[5]

e. ^  The arguments of these catholic sources are based on the lack of Orthodox archival baptismal records on Crete and on a relaxed interchange between Greek Orthodox and Roman Catholic rites during El Greco's youth.[11] Based on the assessment that his art reflects the religious spirit of Roman Catholic Spain, and on a reference in his last will and testament, where he described himself as a "devout Catholic", some scholars assume that El Greco was part of the vibrant Catholic Cretan minority or that he converted from Greek Orthodoxy to Roman Catholicism before leaving the island.[12]

f. ^  According to archival research in the late 1990s, El Greco was still in Candia at the age of twenty-six. It was there where his works, created in the spirit of the post-Byzantine painters of the Cretan School, were greatly esteemed. On December 26, 1566 El Greco sought permission from the Venetian authorities to sell a "panel of the Passion of Christ executed on a gold background" ("un quadro della Passione del Nostro Signor Giesu Christo, dorato") in a lottery.[5] The Byzantine icon by young Doménicos depicting the Passion of Christ, painted on a gold ground, was appraised and sold on December 27, 1566 in Candia for the agreed price of seventy gold ducats (The panel was valued by two artists; one of them was icon-painter Georgios Klontzas. One valuation was eighty ducats and the other seventy), equal in value to a work by Titian or Tintoretto of that period.[13] Therefore, it seems that El Greco traveled to Venice sometime after December 27, 1566.[14] In one of his last articles, Wethey reassessed his previous estimations and accepted that El Greco left Crete in 1567.[15] According to other archival material — drawings El Greco sent to a Cretan cartographer — he was in Venice by 1568.[13]

g. ^  Mancini reports that El Greco said to the Pope that if the whole work was demolished he himself would do it in a decent manner and with seemliness.[16]

i. ^ El Greco signed the contract for the decoration of the high altar of the church of the Hospital of Charity on June 18, 1603. He agreed to finish the work by August of the following year. Although such deadlines were seldom met, it was a point of potential conflict. He also agreed to allow the brotherhood to select the appraisers.[18] The brotherhood took advantage of this act of good faith and did not wish to arrive at a fair settlement.[19] Finally, El Greco assigned his legal representation to Preboste and a friend of him, Francisco Ximénez Montero, and accepted a payment of 2,093 ducats.[20]

j. ^ Doña Jerónima de Las Cuevas appears to have outlived El Greco, and, although the master acknowledged both her and his son, he never married her. That fact has puzzled researchers, because he mentioned her in various documents, including his last testament. Most analysts assume that El Greco had married unhappily in his youth and therefore could not legalize another attachment.[4]

k. ^  The myth of El Greco's madness came in two versions. On the one hand Gautier believed that El Greco went mad from excessive artistic sensitivity.[21] On the other hand, the public and the critics would not possess the ideological criteria of Gautier and would retain the image of El Greco as a "mad painter" and, therefore, his "maddest" paintings were not admired but considered to be historical documents proving his "madness".[22]

l. ^  This theory enjoyed surprising popularity during the early years of the twentieth century and was opposed by the German psychologist David Kuntz.[23] Whether or not El Greco had progressive astigmatism is still open to debate.[24] Stuart Anstis, Professor at the University of California (Department of Psychology), concludes that "even if El Greco were astigmatic, he would have adapted to it, and his figures, whether drawn from memory or life, would have had normal proportions. His elongations were an artistic expression, not a visual symptom."[25] According to Professor of Spanish John Armstrong Crow, "astigmatism could never give quality to a canvas, nor talent to a dunce".[26]