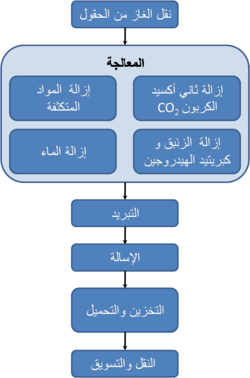 Information for the following table is derived in part from publication by the U.S. Energy Information Administration.[1]
See also List of LNG terminals

Global LNG import trends, by volume (in red), and as a percentage of global natural gas imports (in black) (US EIA data)
Trends in the top five LNG-importing nations as of 2009 (US EIA data)

There are three major pricing systems in the current LNG contracts:

The formula for an indexed price is as follows:

The formula has been widely used in Asian LNG SPAs, where base price refers to a term that represents various non-oil factors, but usually a constant determined by negotiation at a level which can prevent LNG prices from falling below a certain level. It thus varies regardless of oil price fluctuation.

Some LNG buyers have already signed contracts for future US-based cargos at Henry Hub-linked prices.[8] Cheniere Energy’s LNG export contract pricing consists of a fixed fee (liquefaction tolling fee) plus 115% of Henry Hub per MMBtu of LNG.[9] Tolling fees in the Cheniere contracts vary: $2.25/MMBtu with BG Group signed in 2011; $2.49/MMBtu with Spain's GNF signed in 2012; and $3.00/MMBtu with South Korea's Kogas and Centrica signed in 2013.[10]

Many formulae include an S-curve, where the price formula is different above and below a certain oil price, to dampen the impact of high oil prices on the buyer, and low oil prices on the seller. Bulk of the LNG trade is governed by long term contracts. When the spot LNG prices are cheaper than long term oil price indexed contracts, profitable LNG end use is to power mobile engines for replacing costly gasoline and diesel consumption.

Brent and other energy carriers

Usually there exists a clause allowing parties to trigger the price revision or price reopening in LNG SPAs. In some contracts there are two options for triggering a price revision. regular and special. Regular ones are the dates that will be agreed and defined in the LNG SPAs for the purpose of price review.

Floating liquefied natural gas (FLNG) facilities float above an offshore gas field, and produce, liquefy, store and transfer LNG (and potentially LPG and condensate) at sea before carriers ship it directly to markets. The first FLNG facility is now in development by Shell,[16] due for completion in around 2017.[17]

Modern LNG storage tanks are typically full containment type, which has a prestressed concrete outer wall and a high-nickel steel inner tank, with extremely efficient insulation between the walls. Large tanks are low aspect ratio (height to width) and cylindrical in design with a domed steel or concrete roof. Storage pressure in these tanks is very low, less than 10 kPa (1.45 psig). Sometimes more expensive underground tanks are used for storage. Smaller quantities (say 700 m3 (190,000 US gallons) and less), may be stored in horizontal or vertical, vacuum-jacketed, pressure vessels. These tanks may be at pressures anywhere from less than 50 kPa to over 1,700 kPa (7 psig to 250 psig).

LNG must be kept cold to remain a liquid, independent of pressure. Despite efficient insulation, there will inevitably be some heat leakage into the LNG, resulting in vaporisation of the LNG. This boil-off gas acts to keep the LNG cold. The boil-off gas is typically compressed and exported as natural gas, or it is reliquefied and returned to storage.

LNG is transported in specially designed ships with double hulls protecting the cargo systems from damage or leaks. There are several special leak test methods available to test the integrity of an LNG vessel's membrane cargo tanks.[18]

Transportation and supply is an important aspect of the gas business, since natural gas reserves are normally quite distant from consumer markets. Natural gas has far more volume than oil to transport, and most gas is transported by pipelines. There is a natural gas pipeline network in the former Soviet Union, Europe and North America. Natural gas is less dense, even at higher pressures. Natural gas will travel much faster than oil through a high-pressure pipeline, but can transmit only about a fifth of the amount of energy per day due to the lower density. Natural gas is usually liquefied to LNG at the end of the pipeline, prior to shipping.

Short LNG pipelines for use in moving product from LNG vessels to onshore storage are available. Longer pipelines, which allow vessels to offload LNG at a greater distance from port facilities are under development. This requires pipe in pipe technology due to requirements for keeping the LNG cold.[20]

LNG is transported using both tanker truck,[21] railway tanker, and purpose built ships known as LNG carriers. LNG will be sometimes taken to cryogenic temperatures to increase the tanker capacity. The first commercial ship-to-ship transfer (STS) transfers were undertaken in February 2007 at the Flotta facility in Scapa Flow[22] with 132,000 m3 of LNG being passed between the vessels Excalibur and Excelsior. Transfers have also been carried out by Exmar Shipmanagement, the Belgian gas tanker owner in the Gulf of Mexico, which involved the transfer of LNG from a conventional LNG carrier to an LNG regasification vessel (LNGRV). Prior to this commercial exercise LNG had only ever been transferred between ships on a handful of occasions as a necessity following an incident.[بحاجة لمصدر] SIGTTO - the Society of International Gas Tanker and Terminal Operators is the responsible body for LNG operators around the world and seeks to disseminate knowledge regarding the safe transport of LNG at sea.[23]

Besides LNG vessels, LNG is also used in some aircraft.

Liquefied natural gas is used to transport natural gas over long distances, often by sea. In most cases, LNG terminals are purpose-built ports used exclusively to export or import LNG.

The insulation, as efficient as it is, will not keep LNG cold enough by itself. Inevitably, heat leakage will warm and vapourise the LNG. Industry practice is to store LNG as a boiling cryogen. That is, the liquid is stored at its boiling point for the pressure at which it is stored (atmospheric pressure). As the vapour boils off, heat for the phase change cools the remaining liquid. Because the insulation is very efficient, only a relatively small amount of boil off is necessary to maintain temperature. This phenomenon is also called auto-refrigeration.

Boil off gas from land based LNG storage tanks is usually compressed and fed to natural gas pipeline networks. Some LNG carriers use boil off gas for fuel.