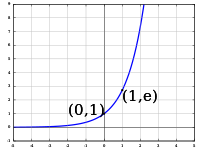 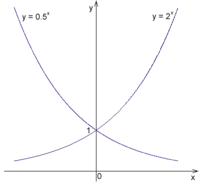 Exponential functions with bases 2 and 1/2

For real numbers c and d, a function of the form

is also an exponential function, since it can be rewritten as

As functions of a real variable, exponential functions are uniquely characterized by the fact that the growth rate of such a function (that is, its derivative) is directly proportional to the value of the function. The constant of proportionality of this relationship is the natural logarithm of the base b:

The constant e = 2.71828... is the unique base for which the constant of proportionality is 1, so that the function is its own derivative:

, it is computationally and conceptually convenient to reduce the study of exponential functions to this particular one. The natural exponential is hence denoted by

The former notation is commonly used for simpler exponents, while the latter is preferred when the exponent is a complicated expression. The graph of

is upward-sloping, and increases faster as x increases.[4] The graph always lies above the x-axis, but becomes arbitrarily close to it for large negative x; thus, the x-axis is a horizontal asymptote. The equation

means that the slope of the tangent to the graph at each point is equal to its y-coordinate at that point. Its inverse function is the natural logarithm, denoted

because of this, some old texts[5] refer to the exponential function as the antilogarithm.

The exponential function satisfies the fundamental multiplicative identity (which can be extended to complex-valued exponents as well):

It can be shown that every continuous, nonzero solution of the functional equation

is an exponential function,

The multiplicative identity, along with the definition

for positive integers n, relating the exponential function to the elementary notion of exponentiation.

The argument of the exponential function can be any real or complex number, or even an entirely different kind of mathematical object (for example, a square matrix).

The real exponential function   can be characterized in a variety of equivalent ways. It is commonly defined by the following power series:[6][7]

Since the radius of convergence of this power series is infinite, this definition is, in fact, applicable to all complex numbers z ∈ ℂ (see § Complex plane for the extension of   to the complex plane). The constant e can then be defined as

The term-by-term differentiation of this power series reveals that   for all real x, leading to another common characterization of   as the unique solution of the differential equation

Based on this characterization, the chain rule shows that its inverse function, the natural logarithm, satisfies   for   or   This relationship leads to a less common definition of the real exponential function   as the solution   to the equation

By way of the binomial theorem and the power series definition, the exponential function can also be defined as the following limit:[8][7]

The red curve is the exponential function. The black horizontal lines show where it crosses the green vertical lines.

The exponential function arises whenever a quantity grows or decays at a rate proportional to its current value. One such situation is continuously compounded interest, and in fact it was this observation that led Jacob Bernoulli in 1683[9] to the number

now known as e. Later, in 1697, Johann Bernoulli studied the calculus of the exponential function.[9]

If a principal amount of 1 earns interest at an annual rate of x compounded monthly, then the interest earned each month is x/12 times the current value, so each month the total value is multiplied by (1 + x/12), and the value at the end of the year is (1 + x/12)12. If instead interest is compounded daily, this becomes (1 + x/365)365. Letting the number of time intervals per year grow without bound leads to the limit definition of the exponential function,

first given by Leonhard Euler.[8] This is one of a number of characterizations of the exponential function; others involve series or differential equations.

From any of these definitions it can be shown that the exponential function obeys the basic exponentiation identity,

which justifies the notation ex for exp x.

The importance of the exponential function in mathematics and the sciences stems mainly from its property as the unique function which is equal to its derivative and is equal to 1 when x = 0. That is,

Functions of the form cex for constant c are the only functions that are equal to their derivative (by the Picard–Lindelöf theorem). Other ways of saying the same thing include:

If a variable's growth or decay rate is proportional to its size—as is the case in unlimited population growth (see Malthusian catastrophe), continuously compounded interest, or radioactive decay—then the variable can be written as a constant times an exponential function of time. Explicitly for any real constant k, a function f: R → R satisfies f′ = kf if and only if f(x) = cekx for some constant c. The constant k is called the decay constant, disintegration constant,[10] rate constant,[11] or transformation constant.[12]

Furthermore, for any differentiable function f(x), we find, by the chain rule:

A continued fraction for ex can be obtained via an identity of Euler:

or, by applying the substitution z = x/y:

This formula also converges, though more slowly, for z > 2. For example:

A complex plot of  , with the phase   represented by varying hue. The transition from dark to light colors shows that   is increasing only to the right. The periodic horizontal bands corresponding to the same hue indicate that   is periodic in the imaginary part of  .

Alternatively, the complex exponential function may defined by modelling the limit definition for real arguments, but with the real variable replaced by a complex one:

For the power series definition, term-wise multiplication of two copies of this power series in the Cauchy sense, permitted by Mertens' theorem, shows that the defining multiplicative property of exponential functions continues to hold for all complex arguments:

The definition of the complex exponential function in turn leads to the appropriate definitions extending the trigonometric functions to complex arguments.

In particular, when z = it (t real), the series definition yields the expansion

This correspondence provides motivation for defining cosine and sine for all complex arguments in terms of   and the equivalent power series:[14]

The functions exp, cos, and sin so defined have infinite radii of convergence by the ratio test and are therefore entire functions (that is, holomorphic on  ). The range of the exponential function is  , while the ranges of the complex sine and cosine functions are both   in its entirety, in accord with Picard's theorem, which asserts that the range of a nonconstant entire function is either all of  , or   excluding one lacunary value.

These definitions for the exponential and trigonometric functions lead trivially to Euler's formula:

We could alternatively define the complex exponential function based on this relationship. If z = x + iy, where x and y are both real, then we could define its exponential as

where exp, cos, and sin on the right-hand side of the definition sign are to be interpreted as functions of a real variable, previously defined by other means.[15]

For  , the relationship   holds, so that   for real   and   maps the real line (mod 2π) to the unit circle in the complex plane. Moreover, going from   to  , the curve defined by   traces a segment of the unit circle of length

starting from z = 1 in the complex plane and going counterclockwise. Based on these observations and the fact that the measure of an angle in radians is the arc length on the unit circle subtended by the angle, it is easy to see that, restricted to real arguments, the sine and cosine functions as defined above coincide with the sine and cosine functions as introduced in elementary mathematics via geometric notions.

The complex exponential function is periodic with period 2πi and   holds for all  .

When its domain is extended from the real line to the complex plane, the exponential function retains the following properties:

Extending the natural logarithm to complex arguments yields the complex logarithm log z, which is a multivalued function.

We can then define a more general exponentiation:

See failure of power and logarithm identities for more about problems with combining powers.

the graph of the exponential function is a two-dimensional surface curving through four dimensions.

Starting with a color-coded portion of the   domain, the following are depictions of the graph as variously projected into two or three dimensions.

The fourth image shows the graph extended along the imaginary   axis. It shows that the graph's surface for positive and negative   values doesn't really meet along the negative real   axis, but instead forms a spiral surface about the   axis. Because its   values have been extended to ±2π, this image also better depicts the 2π periodicity in the imaginary   value.

Complex exponentiation ab can be defined by converting a to polar coordinates and using the identity (eln a)b  = ab:

However, when b is not an integer, this function is multivalued, because θ is not unique (see failure of power and logarithm identities).

The power series definition of the exponential function makes sense for square matrices (for which the function is called the matrix exponential) and more generally in any unital Banach algebra B. In this setting, e0 = 1, and ex is invertible with inverse e−x for any x in B. If xy = yx, then ex + y = exey, but this identity can fail for noncommuting x and y.

Some alternative definitions lead to the same function. For instance, ex can be defined as

The identity exp(x + y) = exp x exp y can fail for Lie algebra elements x and y that do not commute; the Baker–Campbell–Hausdorff formula supplies the necessary correction terms.

The function ez is not in C(z) (that is, is not the quotient of two polynomials with complex coefficients).

The function ez is transcendental over C(z).

When computing (an approximation of) the exponential function near the argument 0, the result will be close to 1, and computing the value of the difference   with floating-point arithmetic may lead to the loss of (possibly all) significant figures, producing a large calculation error, possibly even a meaningless result.

Following a proposal by William Kahan, it may thus be useful to have a dedicated routine, often called expm1, for computing ex − 1 directly, bypassing computation of ex. For example, if the exponential is computed by using its Taylor series

one may use the Taylor series of

This was first implemented in 1979 in the Hewlett-Packard HP-41C calculator, and provided by several calculators,[16][17] operating systems (for example Berkeley UNIX 4.3BSD[18]), computer algebra systems, and programming languages (for example C99).[19]

A similar approach has been used for the logarithm (see lnp1).[nb 3]

gives a high-precision value for small values of x on systems that do not implement expm1(x).