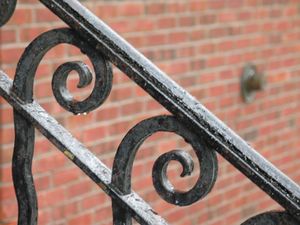 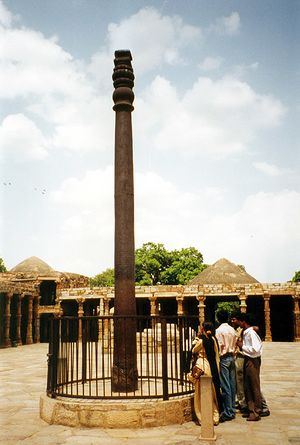 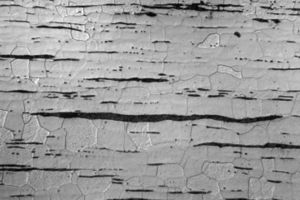 The puddling process of smelting iron ore to make wrought iron from pig iron, the right half of the illustration (not shown) displays men working a blast furnace, Tiangong Kaiwu encyclopedia published in 1637, written by Song Yingxing (1587-1666).

Wrought iron was originally produced by a variety of smelting processes, all described today as bloomeries. Different forms of bloomery were used at different places and times. The bloomery was charged with charcoal and iron ore and then lit. Air was blown in through a tuyere to heat the bloomery to a temperature somewhat below the melting point of iron. In the course of the smelt, slag would melt and run out, and carbon monoxide from the charcoal would reduce the ore to iron, which formed a spongy mass. The iron remained in the solid state. If the bloomery was allowed to become hot enough to melt the iron, carbon would dissolve into it and form pig or cast iron, but that was not the intention.

Osmond iron consisted of balls of wrought iron, produced by melting pig iron and catching the droplets on a staff, which was spun in front of a blast of air so as to expose as much of it as possible to the air and oxidise its carbon content.[1] The resultant ball was often forged into bar iron in a hammer mill.

In the 15th century, the blast furnace spread into what is now Belgium and was improved. From there, it spread via the Pays de Bray on the boundary of Normandy and then to the Weald in إنگلترة. With it, the finery forge spread. These remelted the pig iron and (in effect) burnt out the carbon, producing a bloom, which was then forged into a bar iron. If rod iron was required, a slitting mill was used.

A number of processes for making wrought iron without charcoal were devised as the Industrial Revolution began during the latter half of the 18th century. The most successful of these was puddling, using a puddling furnace (a variety of the reverberatory furnace). This was invented by Henry Cort in 1784.[2] It was later improved by others including Joseph Hall. In this type of furnace, the metal does not come into contact with the fuel, and so is not contaminated by impurities in it. The flame from the fire is reverberated or sent back down onto the metal on the fire bridge of the furnace.

The bloom is passed through grooved rollers and flat bars were produced. These bars of wrought iron were of poor quality, called muck bars,[3][4] or puddle bars.[5] To improve the quality of wrought iron, these bars were cut up, piled, and tied together by wires, a process known as faggoting, or piling.[3] They were then reheated and rolled again in merchant rolls. This process may be repeated several times to get wrought iron of desired quality. Wrought iron that has been rolled multiple times is called merchant bars or merchant iron.[6][7]

In 1925, James Aston of the الولايات المتحدة developed a process for manufacturing wrought iron quickly and economically. It involves taking molten steel from a Bessemer converter and pouring it into cooler liquid slag. The temperature of the steel is about 1500 °C and the liquid slag is maintained at approximately 1200 °C. The molten steel contains a large amount of dissolved gases so when the liquid steel hits the cooler surfaces of the liquid slag the gases are liberated. The molten steel then freezes to yield a spongy mass having a temperature of about 1370 °C.[5] This spongy mass must then be finished by being shingled and rolled as described under puddling (above). Three to four tons can be converted per batch with this method.[5]

The slag inclusions in wrought iron give it properties not found in other forms of ferrous metal. There are approximately 250,000 inclusions per square inch.[8] A fresh fracture shows a clear bluish color with a high silky luster and fibrous appearance.

Wrought iron lacks the carbon content necessary for hardening through heat treatment, but in areas where steel was uncommon or unknown, tools were sometimes cold-worked (hence cold iron) in order to harden them. An advantage of its low carbon content is its excellent weldability.[8] Furthermore, sheet wrought iron cannot bend as much as steel sheet metal (when cold worked).[9][10][11] Wrought iron can be cast, however there is no engineering advantage, as compared to cast iron; cast iron is much easier to produce, and thus cheaper, so it is exclusively chosen over wrought iron.[12][13]

Wrought iron is less affected by rust than most other ferrous metals due to its slag inclusions. The slag fibers tend to disperse the corrosion into an even film, thereby resisting pitting.[8] Wrought iron has a rough surface so it can hold platings and coatings better. For instance, a galvanic zinc finish is approximately 25-40% thicker than the same finish on steel.[8]

Amongst its other properties, wrought iron becomes soft at red heat, and can be easily forged and forge welded.[18] It can be used to form temporary magnets, but cannot be magnetized permanently,[19][20] and is ductile, malleable and tough.[3]