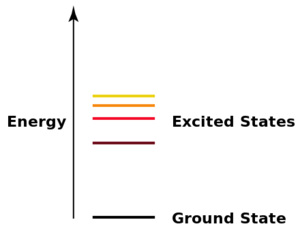 If more than one ground state exists, they are said to be degenerate. Many systems have degenerate ground states. Degeneracy occurs whenever there exists a unitary operator that acts non-trivially on a ground state and commutes with the Hamiltonian of the system.

حيث V(x) is the potential.

With integration by parts:

Hence in case that   is equal to zero, one gets:

Assuming   around  , one may write

where   is the norm.

Note that the kinetic-energy densities hold   everywhere because of the normalization. More significantly, the average kinetic energy is lowered by   by the deformation to ψ'.

On the other hand, in the interval   we have

which holds to order  .

However, the contribution to the potential energy from this region for the state ψ with a node is

lower, but still of the same lower order   as for the deformed state ψ', and subdominant to the lowering of the average kinetic energy. Therefore, the potential energy is unchanged up to order  , if we deform the state   with a node into a state ψ' without a node, and the change can be ignored.

We can therefore remove all nodes and reduce the energy by  , which implies that ψ' cannot be the ground state. Thus the ground-state wave function cannot have a node. This completes the proof. (The average energy may then be further lowered by eliminating undulations, to the variational absolute minimum.)

As the ground state has no nodes it is spatially non-degenerate, i.e. there are no two stationary quantum states with the energy eigenvalue of the ground state (let's name it  ) and the same spin state and therefore would only differ in their position-space wave functions.[1]

The reasoning goes by contradiction: For if the ground state would be degenerate then there would be two orthonormal[2] stationary states   and   — later on represented by their complex-valued position-space wave functions   and   — and any superposition   with the complex numbers   fulfilling the condition   would also be a be such a state, i.e. would have the same energy-eigenvalue   and the same spin-state.

Now let   be some random point (where both wave functions are defined) and set:

و مع (according to the premise no nodes).

Therefore the position-space wave function of   is

But   i.e.,   is a node of the ground state wave function and that is in contradiction to the premise that this wave function cannot have a node.

Note that the ground state could be degenerate because of different spin states like   and   while having the same position-space wave function: Any superposition of these states would create a mixed spin state but leave the spatial part (as a common factor of both) unaltered.