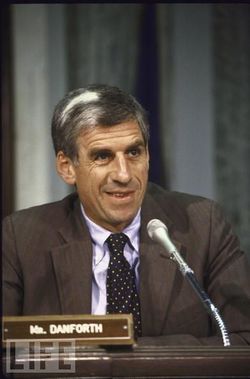 In his first bid to run for public office at any level he was elected in 1968 at the age of 32 to be Missouri Attorney General. On his staff of assistant attorneys general were Kit Bond, John Ashcroft, and Clarence Thomas.

In 1970 Danforth ran for the United States Senate for the first time, against Democratic incumbent Stuart Symington. Danforth was defeated in a close race.

In 1972 Danforth's colleague Bond was elected Missouri Governor at the age of 33, and Danforth was re-elected Attorney General. The two projected an image of Missouri's young Republican wunderkind in a state that traditionally had been Democratic.

Faith and Politics: How the "Moral Values" Debate Divides America and How to Move Forward Together by John Danforth

Danforth has had a colorful post-Senate career.

Danforth has received a star on the St. Louis Walk of Fame. [4]

Danforth is currently a partner at Bryan Cave. [5]

Danforth is one of the eight directors (not all living) of the Commission on Presidential Debates. [3]

Danforth is currently a Member of the Global Leadership Foundation, an organization which works to promote good governance around the world.[6]