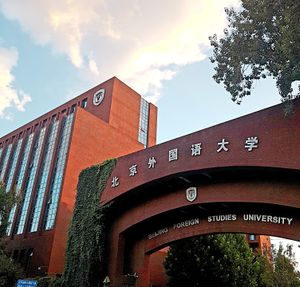 BFSU ranked the 19th out of 2,879 universities in China according to the statistics conducted on scores of test takers from 2012 to 2018 for the National College Entrance Examination (Gaokao).[3]

BFSU alumni are well-known for Chinese diplomacy circles, the Ministry of Foreign Affairs in China. Around 400 ambassadors and over 1,000 counselors graduated from BFSU. BFSU is thus known as “Cradle of Diplomats”.[6]

BFSU was affiliated with the Ministry of Foreign Affairs from its establishment in 1941 to the early 1980s and was classified a key university under the Ministry of Education. BFSU is praised for offering the widest range of language studies in China: as of December 2016, there are 84 foreign languages being taught in this university.[7]

BFSU qualified for the first round of the competition in its efforts to enter Project 211, a university development programme launched by the Ministry of Education in 1996.[8] BFSU is directly under the leadership of the Chinese Ministry of Education. BFSU is one of China’s top universities listed under “Project 985 platform” and “Project 211”. Both government-sponsored campaigns selected BFSU to governmentally support BFSU.[9]

BFSU has more than 1,000 international students from all over the world, more than 100 countries. Especially, South Korean, German, Malaysian (IBS) and Japanese students (School of Chinese Language and Literature) are the largest ethnic groups on campus. Some foreign students study only in Mandarin with Chinese students but most of the foreign students select international business school undergraduate program which is taught in English and can take Chinese language courses. More than 70 years, over 90,000 people have graduated from the Beijing Foreign Studies University.[10]

A Chinese French novelist Gao Xingjian, who was awarded the Nobel Prize for Literature "for an oeuvre of universal validity, bitter insights and linguistic ingenuity." graduated from the department of French, Beijing Foreign Studies University.[11]

This centre has so-called corpus researchers.[13] They have compiled corpora, such as simple Chinese English learners' corpora, and parallel corpora of Chinese-English translation. They have some corpora on the CQPweb.[14]