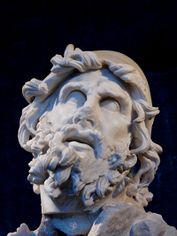 Head of Odysseus from a Greek 2nd century BC marble group representing Odysseus blinding Polyphemus, found at the villa of Tiberius at Sperlonga

The bay of Palaiokastritsa in Corfu as seen from Bella vista of Lakones. Corfu is considered to be the mythical island of the Phaeacians. The bay of Palaiokastritsa is considered to be the place where Odysseus disembarked and met Nausicaa for the first time. The rock in the sea visible near the horizon at the top centre-left of the picture is considered by the locals to be the mythical petrified ship of Odysseus. The side of the rock toward the mainland is curved in such a way as to resemble the extended sail of a trireme