التمييز المكاني Positional notation أو place-value notation is a method of representing or encoding numbers. Positional notation is distinguished from other notations (such as Roman numerals) for its use of the same symbol for the different orders of magnitude (for example, the "ones place", "tens place", "hundreds place"). This greatly simplified arithmetic, leading to the rapid spread of the notation across the world. 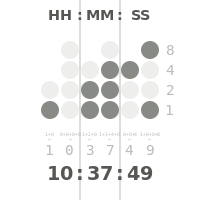 With the use of a radix point (decimal point in base-10), the notation can be extended to include fractions and the numeric expansions of real numbers.

Today, the base-10 (decimal) system, which is likely motivated by counting with the ten fingers, is ubiquitous. Other bases have been used in the past however, and some continue to be used today. For example, the Babylonian numeral system, credited as the first positional numeral system, was base-60, but it lacked a real 0 value. Zero was indicated by a space between sexagesimal numerals. By 300 BC, a punctuation symbol (two slanted wedges) was co-opted as a placeholder in the same Babylonian system. In a tablet unearthed at Kish (dating from about 700 BC), the scribe Bêl-bân-aplu wrote his zeros with three hooks, rather than two slanted wedges.[1] The Babylonian placeholder was not a true zero because it was not used alone. Nor was it used at the end of a number. Thus numbers like 2 and 120 (2×60), 3 and 180 (3×60), 4 and 240 (4×60), looked the same because the larger numbers lacked a final sexagesimal placeholder. Only context could differentiate them.

Before positional notation became standard, simple additive systems (sign-value notation) such as Roman Numerals were used, and accountants in ancient Rome and during the Middle Ages used the abacus or stone counters to do arithmetic.[2]

Counting rods and most abacuses have been used to represent numbers in a positional numeral system. With counting rods or abacus to perform arithmetic operations, the writing of the starting, intermediate and final values of a calculation could easily be done with a simple additive system in each position or column. This approach required no memorization of tables (as does positional notation) and could produce practical results quickly. For four centuries (from the 13th to the 16th) there was strong disagreement between those who believed in adopting the positional system in writing numbers and those who wanted to stay with the additive-system-plus-abacus. Although electronic calculators have largely replaced the abacus, the latter continues to be used in Japan and other Asian countries.

Interesting properties exist when the base is not fixed or positive and when the digit symbol sets denote negative values. There are many more variations. These systems are of practical and theoretic value to computer scientists.

Each position does not need to be positional itself. Babylonian sexagesimal numerals were positional, but in each position were groups of two kinds of wedges representing ones and tens (a narrow vertical wedge ( | ) and an open left pointing wedge (<))—up to 14 symbols per position (5 tens (<<<<<) and 9 ones ( ||||||||| ) grouped into one or two near squares containing up to three tiers of symbols, or a place holder (\\) for the lack of a position).[3] Hellenistic astronomers used one or two alphabetic Greek numerals for each position (one chosen from 5 letters representing 10–50 and/or one chosen from 9 letters representing 1–9, or a zero symbol).[4]