Porphyry ( /ˈpɔrfəri/ POR-fə-ree) is a textural term for an igneous rock consisting of coarse-grained crystals such as feldspar or quartz dispersed in a fine-grained silicate rich, generally aphanitic matrix or groundmass. The larger crystals are called phenocrysts.[1] In its non-geologic, traditional use, the term porphyry refers to the purple-red form of this stone, valued for its appearance.

"Imperial Porphyry" from the Red Sea Mountains of Egypt 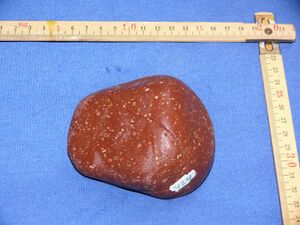 A waterworn cobble of porphyry 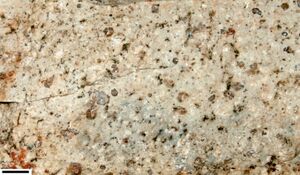 The term porphyry is from the Ancient Greek πορφύρα (porphyra), meaning "purple". Purple was the color of royalty, and the "imperial porphyry" was a deep purple igneous rock with large crystals of plagioclase. Some authors claimed the rock was the hardest known in antiquity.[2] Thus, "imperial"-grade porphyry was prized for monuments and building projects in Imperial Rome and thereafter.

Subsequently, the name was given to any igneous rocks with large crystals. The adjective porphyritic now refers to a certain texture of igneous rock regardless of its chemical and mineralogical composition. Its chief characteristic is a large difference in size between the tiny matrix crystals and the much larger phenocrysts. Porphyries may be aphanites or phanerites, that is, the groundmass may have microscopic crystals as in basalt, or crystals easily distinguishable with the eye, as in granite. Most types of igneous rocks display some degree of porphyritic texture.

Most igneous rocks have some degree of porphyritic texture. This is because most magma from which igneous rock solidifies is produced by partial melting of a mixture of different minerals.[3] When a body of magma slowly cools underground, the mineral with which the magma is most saturated begins crystallizing from the magma first, forming phenocrysts. The phenocrysts usually have plenty of room for growth, and form large, well-shaped crystals with characteristic crystal faces (euhedral crystals). If the partially crystallized magma is then erupted to the surface, the remainder of the magma crystallizes much more rapidly to form the fine-grained or glassy groundmass.[4]

The significance of porphyritic texture as an indication that magma forms through partial melting was first recognized by the Canadian geologist, Norman L. Bowen, in 1928.[5][4]

Porphyritic texture is particularly common in andesite, with the most prominent phenocrysts typically composed of plagioclase feldspar.[6][7] Plagioclase has almost the same density as basaltic magma, so plagioclase phenocrysts are likely to remain suspended in the magma rather than settling out.[8]

Rhomb porphyry is a volcanic rock with gray-white large porphyritic rhombus-shaped phenocrysts embedded in a very fine-grained red-brown matrix. The composition of rhomb porphyry places it in the trachyte–latite classification of the QAPF diagram.[9]

Rhomb porphyry is found in continental rift areas, including the East African Rift (including Mount Kilimanjaro),[10] Mount Erebus near the Ross Sea in Antarctica,[11] the Oslo graben in Norway,[9] and south-central British Columbia.[12]

The Tetrarchs, a porphyry sculpture sacked from the Byzantine Philadelphion palace in 1204, Treasury of St. Marks, Venice
Carmagnola, an imperial porphyry head in Venice thought to represent Justinian

Sarcophagus of Frederick II in Palermo Cathedral, Sicily, made of porphyry
Interior of the de' Medici Cappella dei Principi in Florence, (1870s photograph)

Sarcophagus of Napoleon in Les Invalides, Paris, made of quartzite with a pedestal of green porphyry

In countries where many automobiles have studded winter tires such as Sweden, Finland, and Norway, it is common that highways are paved with asphalt made of porphyry aggregate to make the wearing course withstand the extreme wear from the spiked winter tires.[13]