اللكيـّات Lacquerware هي أغراض مغطاة للزينة بـطلاء اللك. Lacquerware includes small or large containers, tableware, a variety of small objects carried by people, and larger objects such as furniture and even coffins painted with lacquer. Before lacquering, the surface is sometimes painted with pictures, inlaid with shell and other materials, or carved. The lacquer can be dusted with gold or silver and given further decorative treatments. 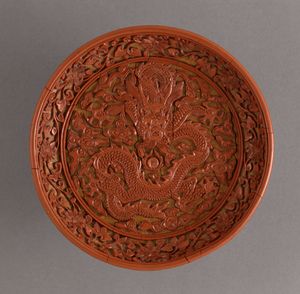 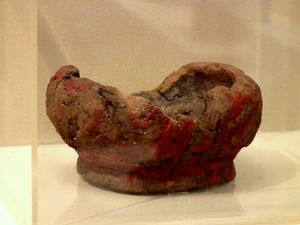 Red lacquer wood bowl from the Chinese Hemudu culture dated to 4000–5000 BC, the oldest such piece ever found.

East Asian countries have long traditions of lacquer work, going back several thousand years in the cases of China and Japan. The best known lacquer, an urushiol-based lacquer common in East Asia, is derived from the dried sap of Toxicodendron vernicifluum. Other types of lacquers are processed from a variety of plants and insects. The traditions of lacquer work in Southeast Asia and the Americas are also ancient and originated independently. True lacquer is not made outside Asia, but some imitations, such as Japanning in Europe, or parallel techniques, are often loosely referred to a "lacquer."

Various prehistoric lacquerwares have been unearthed in China dating back to the Neolithic period and objects with lacquer coating found in Japan dating to the late Jōmon period.[1] The earliest known lacquer object, a red wooden bowl, was unearthed at a Hemudu culture (c. 5th millennium BC) site in Zhejiang, China.[2][3][4]

During the Eastern Zhou period (771–256 BC), lacquerware began appearing in large quantity. This is the earliest era from which notable quantities of lacquerware have survived.[5]

At the time of the Han dynasty (206 BC – 220 AD), special administrations were established to organize and divide labor for the expanding lacquer production in China.[6] Elaborate incised decorations were used in lacquerware during the Han dynasty.[7]

Coromandel lacquer is a Chinese export type, so called because it was shipped to European markets via the Coromandel coast of India.

Lacquerware is referred to by the Sinitic compound shikki (漆器) in Japanese. The native term for lacquer is urushi (漆), source of the English hybrid word "urushiol". Etymologically, urushi may be related to the words uruwashii ("beautiful") or uruoi ("watered", "profitable", "favored"), due speculatively to their value or shiny appearance, or perhaps the humidifying rooms used in production of lacquered wares.

The 17th-century term "japanning" refers to a range of techniques to imitate various Asian lacquerware, but especially those developed in Europe and Great Britain to resemble lacquerware imported from the Orient. These commonly employed a black, oil-based varnish ("Japan black", "Brunswick black", etc.) on wood and later metal substrates, eventually finding a variety of 19th- and early-20th-century industrial applications. Japan black was famously Ford's preferred automotive finish until the advent of quick-drying, variously colored nitrocellulose lacquers.

Primitive lacquer was used in Japan as early as 12,600 BC, during the Jōmon period.[8]

There is also some evidence of cultivation of the lacquer tree in prehistoric times (perhaps for extraction of urushiol-based adhesives).

Some lacquerware techniques also arrived in Japan from China through the Korean Peninsula along with Buddhism and the Chinese writing system in the Asuka and Nara periods (6th through 8th centuries).

By the Kamakura period (1185–1333), Japanese craftsman under the influence of the Song dynasty arts focused on carving Buddhist imagery into thick coats of lacquer (Kamakura-bori). Japanese craftsman at this time began applying a thin lacquer coat to carved wood substrates, in this way reducing production times and making lacquerware available beyond temples to samurai and merchants.

Today, lacquerware is produced throughout the Japanese archipelago, with many regional techniques and variations. Besides the very old Kamakura tradition mentioned above (and still alive today), the port town of Wajima provides a good example of regional lacquerware. Wajima-nuri, dating back to the 16th century, is characterized by use of the elm-like Japanese zelkova (keyaki 欅), powdered earth, and delicate features formed from cloth. (See the Japanese article, 輪島塗.)

(A more complete list of regional lacquer traditions is available in the Japanese article.)

لكيات ريوكيو is one of the chief artistic products of the Ryukyu Islands (today Okinawa Prefecture of اليابان); it is quite distinct from the lacquerware found among the surrounding cultures. Nevertheless, Chinese and Japanese influences are present.

Yun-de is lacquerware in Burmese, and the art is called Pan yun (ပန်းယွန်း). The lacquer is the sap tapped from the varnish tree Melanorrhoea usitata or Thitsee that grows wild in the forests of Myanmar (formerly Burma).[9] It is straw-colored but turns black on exposure to air. When brushed in or coated on, it forms a hard glossy smooth surface resistant to a degree from the effects of exposure to moisture or heat.

Bayinnaung's conquest and subjugation in 1555–1562 of Manipur, Bhamo, Zinme (Chiang Mai), Linzin (Lan Xang), and up the Taping and Shweli rivers in the direction of Yunnan brought back large numbers of skilled craftsmen into Burma. It is thought that the finer sort of Burmese lacquerware, called Yun, was introduced during this period by imported artisans belonging to the Yun or Laos Shan tribes of the Chiang Mai region.[10]

Lacquer vessels, boxes and trays have a coiled or woven bamboo-strip base often mixed with horsehair. The thitsee may be mixed with ashes or sawdust to form a putty-like substance called thayo which can be sculpted. The object is coated layer upon layer with thitsee and thayo to make a smooth surface, polished and engraved with intricate designs, commonly using red, green and yellow colors on a red or black background. Shwezawa is a distinctive form in its use of gold leaf to fill in the designs on a black background.[11][12]

Palace scenes, scenes from the Jataka tales, and the signs of the Burmese Zodiac are popular designs and some vessels may be encrusted with glass mosaic or semi-precious stones in gold relief.[12] The objects are all handmade and the designs and engraving done free-hand. It may take three to four months to finish a small vessel but perhaps over a year for a larger piece. The finished product is a result of teamwork and not crafted by a single person.[11]

The most distinctive vessel is probably a rice bowl on a stem with a spired lid for monks called hsun ok. Lahpet ok is a shallow dish with a lid and has a number of compartments for serving lahpet (pickled tea) with its various accompaniments. Stackable tiffin carriers fastened with a single handle or hsun gyaink are usually plain red or black. Daunglan are low tables for meals and may be simple broad based or have three curved feet in animal or floral designs with a lid. Water carafes or yeidagaung with a cup doubling as a lid, and vases are also among lacquerware still in use in many monasteries.[11][12]

Various round boxes with lids, small and large, are known as yun-it including ones for paan called kun-it (betel boxes). Yun titta are rectangular boxes for storing various articles including peisa or palm leaf manuscripts when they are called sadaik titta. Pedestal dishes or small trays with a stem with or without a lid are known as kalat for serving delicacies or offering flowers to royalty or the Buddha. Theatrical troupes and musicians have their lacquerware in costumes, masks, head-dresses, and musical instruments, some of them stored and carried in lacquer trunks.[12] Boxes in the shape of a pumpkin or a bird such as the owl, which is believed to bring luck, or the hintha (Brahmani goose) are common too. Screens and small polygonal tables are also made for the tourist trade today.

Bagan is the major centre for the lacquerware industry where the handicraft has been established for nearly two centuries, and still practiced in the traditional manner. Here a government school of lacquerware was founded in the 1920s. Since plastics, porcelain and metal have superseded lacquer in most everyday utensils, it is today manufactured in large workshops mainly for tourists who come to see the ancient temples of Bagan. At the village of Kyaukka near Monywa in the Chindwin valley, however, sturdy lacquer utensils are still produced for everyday use mainly in plain black.[11]

A decline in the number of visitors combined with the cost of resin, which has seen a 40-fold rise in 15 years, has led to the closure of over two-thirds of more than 200 lacquerware workshops in Bagan.[13]

Sơn mài is a painting technique in Vietnam. It developed from the painters of the Hanoi EBAI in the 1930s and today is counted a national painting style with many famous painters.

In 1924 the Ecole des Beaux Arts was established in Hanoi. This institution was to be the birthplace of the revitalised art of lacquer painting. In 1934 the school opened its lacquer department and it was from here that such luminaries of the art as; Bui Trang Chuoc, Nguyen Van Binh, Nguyen Khang, Nguyen Duc Nung, Nguyen Tien Chung, and Pham Van Don would emerge.

It was the first generation of Vietnamese students of the Indochina School of Fine Art during the 1930s, who elevated the craft of lacquer painting to a truly fine art. Less interested in decor than their craftsmen predecessors, it was also these men who would begin a series of artistic innovations from which craftsmen producing purely utilitarian or decorative pieces would also benefit.

Creating images with crushed eggshell, painting pigment over gold and tin foil and adding sand to lacquer were all techniques developed by those first students. The metallic color lacquerware for which Vietnamese craftsmen are rightly famous, was first developed by artists experimenting with many innovative techniques.

After the reunification, the art of lacquerware was slowly dying out in Vietnam. But since the 1980s, the government has recognized it as a vital cultural and economic force and has encouraged the business community to invest in the craft. As a result, we see a resurgence of lacquerware and a proliferation of lacquerware products from Vietnam.

Barniz de Pasto (es) is a lacquer-like varnish technique originating in the Pre-Columbian era that is a specialty of Pasto, Colombia. It is made by chewing the resin of the Andean mopa-mopa shrub (Elaeagia pastoensis) into thin layers, and then painting it and applying it to a wood, metal, clay or glass surface using heated stones.[14][15] Historically, the technique was applied to wooden keros, drinking vessels.

Known in Mexican Spanish as laca or maque (from Japanese maki-e[16][نشر ذاتي سطري]), Mexican lacquer has independent origins from Asian lacquer. In the pre-Hispanic period, a substance from the aje larvae and/or oil from the chia seed were mixed with powdered minerals to create protective coatings and decorative designs. During this period, the process was almost always applied to dried gourds, especially to make the cups that Mesoamerican nobility drank chocolate from.

After the Conquest, the Spanish had indigenous craftsmen apply the technique to European style furniture and other items, changing the decorative motifs and color schemes, but the process and materials remained mostly the same. Asian lacquerware and artisans brought by the Nao de China also had an influence on the style and motifs of colonial Mexican lacquerware. Today, workshops creating lacquerware are limited to Olinalá, Temalacatzingo and Acapetlahuaya in the state of Guerrero, Uruapan and Pátzcuaro in Michoacán and Chiapa de Corzo in Chiapas. The most popular modern lacquerware are small boxes, sometimes known as cajitas de Olinalá.