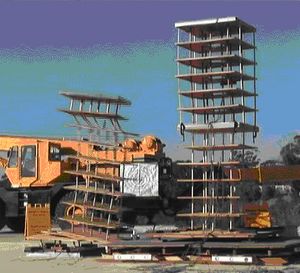 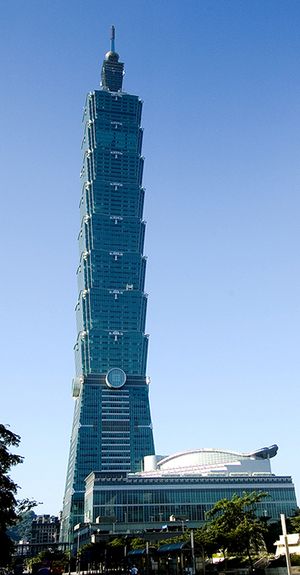 Concurrent experiments with two building models which are kinematically equivalent to a real prototype.[1]

Mausoleum of Cyrus, the oldest base-isolated structure in the world

Dry-stone walls of Machu Picchu Temple of the Sun, Peru

Failure mode is the manner by which an earthquake induced failure is observed. It, generally, describes the way the failure occurs. Though costly and time consuming, learning from each real earthquake failure remains a routine recipe for advancement in seismic design methods. Below, some typical modes of earthquake-generated failures are presented. For information on the photographer and/or the agency that released corresponding images, usually accompanied with brief comments which were used, with sincere gratitude, here and there in this section, click on the thumb nearby.

The lack of reinforcement coupled with poor mortar and inadequate roof-to-wall ties can result in substantial damage to an unreinforced masonry building. Severely cracked or leaning walls are some of the most common earthquake damage. Also hazardous is the damage that may occur between the walls and roof or floor diaphragms. Separation between the framing and the walls can jeopardize the vertical support of roof and floor systems.

Soft story effect. Absence of adequate shear walls on the ground level caused damage to this structure. A close examination of the image reveals that the rough board siding, once covered by a brick veneer, has been completely dismantled from the studwall. Only the rigidity of the floor above combined with the support on the two hidden sides by continuous walls, not penetrated with large doors as on the street sides, is preventing full collapse of the structure.

Effects of soil liquefaction during the 1964 Niigata earthquake

Soil liquefaction. In the cases where the soil consists of loose granular deposited materials with the tendency to develop excessive hydrostatic pore water pressure of sufficient magnitude and compact, liquefaction of those loose saturated deposits may result in non-uniform settlements and tilting of structures. This caused major damage to thousands of buildings in Niigata, Japan during the 1964 earthquake.[2]

Landslide rock fall. A landslide is a geological phenomenon which includes a wide range of ground movement, including rock falls. Typically, the action of gravity is the primary driving force for a landslide to occur though in this case there was another contributing factor which affected the original slope stability: the landslide required an earthquake trigger before being released.

Pounding against adjacent building. This is a photograph of the collapsed five-story tower, St. Joseph's Seminary, Los Altos, California which resulted in one fatality. During Loma Prieta earthquake, the tower pounded against the independently vibrating adjacent building behind. A possibility of pounding depends on both buildings' lateral displacements which should be accurately estimated and accounted for.

At Northridge earthquake, the Kaiser Permanente concrete frame office building had joints completely shattered, revealing inadequate confinement steel, which resulted in the second story collapse. In the transverse direction, composite end shear walls, consisting of two wythes of brick and a layer of shotcrete that carried the lateral load, peeled apart because of inadequate through-ties and failed.

If a superstructure is not mounted on a base isolation system, its shifting on the basement should be prevented.

Reinforced concrete column burst at Northridge earthquake due to insufficient shear reinforcement mode which allows main reinforcement to buckle outwards. The deck unseated at the hinge and failed in shear. As a result, the La Cienega-Venice underpass section of the 10 Freeway collapsed.

Loma Prieta earthquake: side view of reinforced concrete support-columns failure which triggered the upper deck collapse onto the lower deck of the two-level Cypress viaduct of Interstate Highway 880, Oakland, CA.

Failure of retaining wall due to ground movement, Loma Prieta

Ground shaking triggered soil liquefaction in a subsurface layer of sand, producing differential lateral and vertical movement in an overlying carapace of unliquified sand and silt. This mode of ground failure, termed lateral spreading, is a principal cause of liquefaction-related earthquake damage.[3]

Severely damaged building of Agriculture Development Bank of China after 2008 Sichuan earthquake: most of the beams and pier columns are sheared. Large diagonal cracks in masonry and veneer are due to in-plane loads while abrupt settlement of the right end of the building should be attributed to a landfill which may be hazardous even without any earthquake, see video footage at.[4]

Twofold tsunami impact: sea waves hydraulic pressure and inundation. Thus, the Indian Ocean earthquake of December 26, 2004, with the epicenter off the west coast of Sumatra, Indonesia, triggered a series of devastating tsunamis, killing more than 230,000 people in eleven countries by inundating surrounding coastal communities with huge waves up to 30 meters (100 feet) high. For a video footage of the tsunami propagation, click on.[6]

Earthquake construction means implementation of seismic design to enable building and non-building structures to live through the anticipated earthquake exposure up to the expectations and in compliance with the applicable building codes.

Around thirty percent of the world's population lives or works in earth-made construction.[7] Adobe type of mud bricks is one of the oldest and most widely used building materials. The use of adobe is very common in some of the world's most hazard-prone regions, traditionally across Latin America, Africa, Indian subcontinent and other parts of Asia, Middle East and Southern Europe.

Prestressed structure is the one whose overall integrity, stability and security depend, primarily, on a prestressing. Prestressing means the intentional creation of permanent stresses in a structure for the purpose of improving its performance under various service conditions.[8]

There are the following basic types of prestressing: