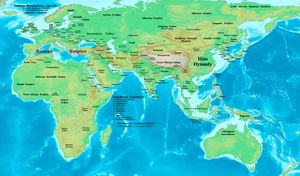 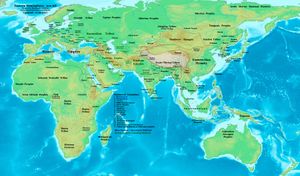 According to the New Testament, during the reign of Tiberius, Jesus, a Jewish religious leader from Galilee, was crucified in Jerusalem on the charge of blasphemy for claiming to be the Son of God. But God raised him from the dead[4] three days later, see Resurrection of Jesus. Over the next few decades his followers, following the Great Commission, including the apostle Paul, carried his message throughout the Greek-speaking regions of Asia Minor, eventually introducing it to Rome itself. Roman rulers began to persecute the new sect almost immediately (the emperor Nero accused the Christians of starting the fires that destroyed much of Rome in 64 AD), and would continue to do so for centuries, sometimes vigorously, and other times passively. يسجل الموروث المسيحي أن كل حواريي المسيح باستثناء يوحنا المعمدان قد نالوا الشهادة.

In the 4th century, Christianity was eventually taken up by the emperor Constantine, although one of his successors Julian the Apostate renounced it for paganism and again persecuted the Church. However, by the end of the 4th century, Emperor Theodosius I proclaimed Christianity as the state religion of the Roman Empire.