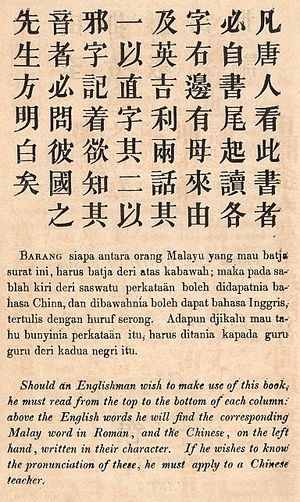 1839 – Trilingual Chinese–Malay–English text – Malay was the lingua franca across the Strait of Malacca, including the coasts of the Malay Peninsula (now in Malaysia) and the eastern coast of Sumatra (now in Indonesia), and has been established as a native language of part of western coastal Sarawak and West Kalimantan in Borneo.

The use of lingua francas has existed since antiquity. Latin and Koine Greek were the lingua francas of the Roman Empire and the Hellenistic culture. Akkadian (died out during Classical antiquity) and then Aramaic remained the common languages of a large part of Western Asia from several earlier empires.[4][5]

The Hindustani language (Hindi-Urdu) is the lingua franca of Pakistan and Northern India.[6][نشر ذاتي سطري?][7][صفحة مطلوبة] Many Indian states have adopted the Three-language formula in which students in Hindi-speaking states are taught: "(a) Hindi (with Sanskrit as part of the composite course); (b) Urdu or any other modern Indian language and (c) English or any other modern European language." The order in non-Hindi speaking states is: "(a) the regional language; (b) Hindi; (c) Urdu or any other modern Indian language excluding (a) and (b); and (d) English or any other modern European language."[8] Hindi has also emerged as a lingua franca for the locals of Arunachal Pradesh, a linguistically diverse state in Northeast India.[9][10]It is estimated that 90 percent of the state's population knows Hindi.[11]

Swahili developed as a lingua franca between several Bantu-speaking tribal groups on the east coast of Africa with heavy influence from Arabic.[12] The earliest examples of writing in Swahili are from 1711.[13] In the early 1800's the use of Swahili as a lingua franca moved inland with the Arabic ivory and slave traders. It was eventually adopted by Europeans as well during periods of colonization in the area. German colonizers used it as the language of administration in Tanganyika, which influenced the choice to use it as a national language in what is now independent Tanzania.[12]

In the European Union, the use of English as a lingua franca has led researchers to investigate whether a new dialect of English (Euro English) has emerged.[14]

When the United Kingdom became a colonial power, English served as the lingua franca of the colonies of the British Empire. In the post-colonial period, some of the newly created nations which had multiple indigenous languages opted to continue using English as an official language .

Russian is in use and widely understood in Central Asia and the Caucasus, areas formerly part of the Russian Empire and Soviet Union, and in much of Central and Eastern Europe. It remains the official language of the Commonwealth of Independent States. Russian is also one of the six official languages of the United Nations.[15]

In Qatar, the medical community is primarily made up of workers from countries without English as a native language. In medical practices and hospitals, nurses typically communicate with other professionals in English as a lingua franca.[16] This occurrence has led to interest in researching the consequences and affordances of the medical community communicating in a lingua franca.[16]

Persian is also the lingua franca of Iran and its national language.

Hausa can also be seen as a lingua franca because it is the language of communication between speakers of different languages in Northern Nigeria and other West African countries.