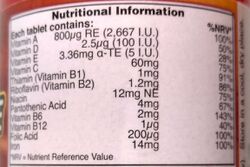 Many biological agents exist in different forms or preparations (e.g. vitamin A in the form of retinol or beta-carotene). The goal of the IU is to be able to compare these, so that different forms or preparations with the same biological effect will contain the same number of IUs. To do so, the WHO Expert Committee on Biological Standardization provides a reference preparation of the agent,[محل شك] arbitrarily sets the number of IUs contained in that preparation, and specifies a biological procedure to compare other preparations of the same agent to the reference preparation. Since the number of IUs contained in a new substance is arbitrarily set, there is no equivalence between IU measurements of different biological agents. For instance, one IU of vitamin E cannot be equated with one IU of vitamin A in any way, including mass or efficacy.

Equality and equivalency of IU for different substances

قالب:Missing information To define the IU for a substance, an international collaborative study is organized by the WHO Expert Committee on Biological Standardization using various assay systems in several laboratories.[2] The main goal of the study is to reach a consensus regarding methods of analysis and the approach to standardization so that results can be compared.[3][4][5]

The study is performed using highly purified preparations of the substance, typically in lyophilized form, called "international reference preparations" or IRPs.[2] Each preparation is divided into precisely weighed samples, with each sample stored in its own ampoule labeled with a code corresponding to the source IRP.[2] Assays are performed using these samples and are calibrated against the previously available IU standard. These results can be quite variable; the final IU value for samples of a given IRP are determined by consensus.[3] The IRP that provides the best results and shows the best long term stability is selected to define the next IU.[2] This IRP is then referred to as the "international standard."[2]

For some substances, the precise mass equivalent of one IU has been changed. When that happens, the former IU mass for that substance is officially abandoned in favor of a newly established mass. The unit count will often still remain in use.[clarify] Such a change has happened with the immunoassay standards for prolactin: as one batch of standard (84/500; 53 mIU ≈ 2.5 μg) was running out of stock, a new standard (83/573; 67 mIU ≈ 3.2 μg) was calibrated against the old one (as 67.2 mIU) and replaced the former.[6]

In order to remove the possibility of having the letter "I" confused with the digit "1", some hospitals have it as a stated policy omit the "I", that is, to only use U or E when talking and writing about dosages, while other hospitals require the word "units" (or words "international units") to be written out entirely.[13] (For example, "three international units per litre" may be abbreviated "3 U/L". The "liter" sign (L) is less affected, as less confusing written forms are used.)