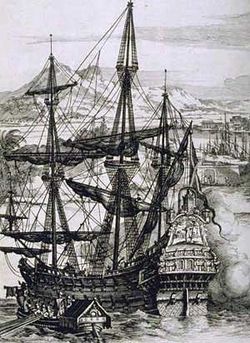 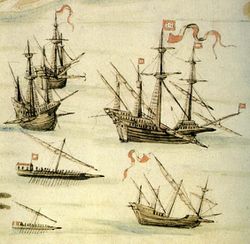 Carracks, galleon (center/right), square rigged caravel (below), galley and fusta (galliot) depicted by D. João de Castro on the "Suez Expedition" (part of the Portuguese Armada of 72 ships sent against the Ottoman fleet anchored in Suez, Egypt, in response to its entry in the Indian Ocean and the siege of Diu in 1538) – Tábuas da India in the João de Castro`s Roteiro do Mar Roxo (Routemap of the Red Sea) of 1540–1541. – Despite this kind of ship (or only a close model of art) was already depicted in the heraldry of the Foral of Lisbon (of D. Manuel I) in 1502, it is in 1510 (as also in some of the following years after 1510) the appearance of the Portuguese oceanic galleon in the records. It is however from 1519 that their number increases substantially, but gradually. It was an evolution and a gradual improvement in the design made during the first quarter of the century – technical improvement which continued until the second half of the century. The Portuguese galleon evolved from the square rigged caravel and was a compromise between the great carrack or nau and the aforementioned square rigged caravel or war caravel (also called caravela de armada or Portuguese man of war) that evolved into a new design of ship, but keeping its hull design similar to the galley.[1] It was also more maneuverable, more robust and heavily armed.

The term galleon, "large ship", comes from Spanish (Castilian) galeón, "armed merchant ship", from Old French galion, "little ship" (13c.), from Portuguese galeão, "war ship", from Byzantine Greek galea, "galley" + augmentative suffix -on.[3] Another possible origin is the Old French word galie, meaning "galley;"[4] also from Byzantine Greek galea.[5] The galea was a warship of the Byzantine navy, and its name may be related to the Greek word galeos, "dogfish shark".[6] The term was originally given to certain types of war galleys in the Middle Ages. The Annali Genovesi mentions galleons of 80, 64 and 60 oars, used for battle and on missions of exploration, in the 12th and 13th centuries. It is very likely that the galleons and galliots mentioned in the accounts of the crusades were the same vessels.[بحاجة لمصدر] In the early 16th century, the Venetian galleoni was a new class of galley used to hunt down pirates in the Mediterranean.

Later, when the term started to be applied to sail-only vessels, it meant, like the English term "man of war", any large warship that was otherwise no different from the other sailing ships of the time.[بحاجة لمصدر]