cerebellum (Latin for "little brain") is a major feature of the hindbrain of all vertebrates. Although usually smaller than the cerebrum, in some animals such as the mormyrid fishes it may be as large as or even larger.[1] In humans, the cerebellum plays an important role in motor control. It may also be involved in some cognitive functions such as attention and language as well as emotional control such as regulating fear and pleasure responses,[2][3] but its movement-related functions are the most solidly established. The human cerebellum does not initiate movement, but contributes to coordination, precision, and accurate timing: it receives input from sensory systems of the spinal cord and from other parts of the brain, and integrates these inputs to fine-tune motor activity.[4] Cerebellar damage produces disorders in fine movement, equilibrium, posture, and motor learning in humans.[4]

Anatomically, the human cerebellum has the appearance of a separate structure attached to the bottom of the brain, tucked underneath the cerebral hemispheres. Its cortical surface is covered with finely spaced parallel grooves, in striking contrast to the broad irregular convolutions of the cerebral cortex. These parallel grooves conceal the fact that the cerebellar cortex is actually a continuous thin layer of tissue tightly folded in the style of an accordion. Within this thin layer are several types of neurons with a highly regular arrangement, the most important being Purkinje cells and granule cells. This complex neural organization gives rise to a massive signal-processing capability, but almost all of the output from the cerebellar cortex passes through a set of small deep nuclei lying in the white matter interior of the cerebellum.[5]

In addition to its direct role in motor control, the cerebellum is necessary for several types of motor learning, most notably learning to adjust to changes in sensorimotor relationships. Several theoretical models have been developed to explain sensorimotor calibration in terms of synaptic plasticity within the cerebellum. These models derive from those formulated by David Marr and James Albus, based on the observation that each cerebellar Purkinje cell receives two dramatically different types of input: one comprises thousands of weak inputs from the parallel fibers of the granule cells; the other is an extremely strong input from a single climbing fiber.[6] The basic concept of the Marr–Albus theory is that the climbing fiber serves as a "teaching signal", which induces a long-lasting change in the strength of parallel fiber inputs. Observations of long-term depression in parallel fiber inputs have provided some support for theories of this type, but their validity remains controversial.[7] 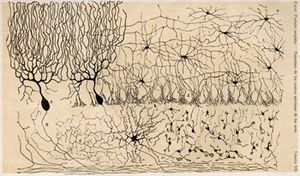 المقالة الرئيسية: Anatomy of the cerebellum

At the level of gross anatomy, the cerebellum consists of a tightly folded layer of cortex, with white matter underneath and a fluid-filled ventricle at the base. Four deep cerebellar nuclei are embedded in the white matter. Each part of the cortex consists of the same small set of neuronal elements, laid out in a highly stereotyped geometry. At an intermediate level, the cerebellum and its auxiliary structures can be separated into several hundred or thousand independently functioning modules called "microzones" or "microcompartments".

ملف:Sobo 1909 653.png
View of the cerebellum from above and behind

The cerebellum is located in the posterior cranial fossa. The fourth ventricle, pons and medulla are in front of the cerebellum.[8]

Damage to the cerebellum often causes motor-related symptoms, the details of which depend on the part of the cerebellum involved and how it is damaged. Damage to the flocculonodular lobe may show up as a loss of equilibrium and in particular an altered, irregular walking gait, with a wide stance caused by difficulty in balancing.[9] Damage to the lateral zone typically causes problems in skilled voluntary and planned movements which can cause errors in the force, direction, speed and amplitude of movements. Other manifestations include hypotonia (decreased muscle tone), dysarthria (problems with speech articulation), dysmetria (problems judging distances or ranges of movement), dysdiadochokinesia (inability to perform rapid alternating movements such as walking), impaired check reflex or rebound phenomenon, and intention tremor (involuntary movement caused by alternating contractions of opposing muscle groups).[10][11] Damage to the midline portion may disrupt whole-body movements, whereas damage localized more laterally is more likely to disrupt fine movements of the hands or limbs. Damage to the upper part of the cerebellum tends to cause gait impairments and other problems with leg coordination; damage to the lower part is more likely to cause uncoordinated or poorly aimed movements of the arms and hands, as well as difficulties in speed.[9] This complex of motor symptoms is called ataxia.

To identify cerebellar problems, neurological examination includes assessment of gait (a broad-based gait being indicative of ataxia), finger-pointing tests and assessment of posture.[4] If cerebellar dysfunction is indicated, a magnetic resonance imaging scan can be used to obtain a detailed picture of any structural alterations that may exist.[12]

The list of medical problems that can produce cerebellar damage is long, including stroke, hemorrhage, swelling of the brain (cerebral edema), tumors, alcoholism, physical trauma such as gunshot wounds or explosives, and chronic degenerative conditions such as olivopontocerebellar atrophy.[13][14] Some forms of migraine headache may also produce temporary dysfunction of the cerebellum, of variable severity.[15] Infection can result in cerebellar damage in such conditions as the prion diseases[16] and Miller Fisher syndrome, a variant of Guillain–Barré syndrome.

يتغير المخيخ البشري مع التقدم في العمر. These changes may differ from those of other parts of the brain. The cerebellum is the youngest brain region (and body part) in centenarians according to an epigenetic biomarker of tissue age known as epigenetic clock: it is about 15 years younger than expected in a centenarian.[17] Further, gene expression patterns in the human cerebellum show less age-related alteration than that in the cerebral cortex.[18] Some studies have reported reductions in numbers of cells or volume of tissue, but the amount of data relating to this question is not very large.[19][20]

Congenital malformation, hereditary disorders, and acquired conditions can affect cerebellar structure and, consequently, cerebellar function. Unless the causative condition is reversible, the only possible treatment is to help people live with their problems.[21] Visualization of the fetal cerebellum by ultrasound scan at 18 to 20 weeks of pregnancy can be used to screen for fetal neural tube defects with a sensitivity rate of up to 99%.[22]

Congenital malformation or underdevelopment (hypoplasia) of the cerebellar vermis is a characteristic of both Dandy–Walker syndrome and Joubert syndrome.[26][27] In very rare cases, the entire cerebellum may be absent.[28] The inherited neurological disorders Machado–Joseph disease, ataxia telangiectasia, and Friedreich's ataxia cause progressive neurodegeneration linked to cerebellar loss.[13][21] Congenital brain malformations outside the cerebellum can, in turn, cause herniation of cerebellar tissue, as seen in some forms of Arnold–Chiari malformation.[29]

Other conditions that are closely linked to cerebellar degeneration include the idiopathic progressive neurological disorders multiple system atrophy and Ramsay Hunt syndrome type I,[30][31] and the autoimmune disorder paraneoplastic cerebellar degeneration, in which tumors elsewhere in the body elicit an autoimmune response that causes neuronal loss in the cerebellum.[32] Cerebellar atrophy can result from an acute deficiency of vitamin B1 (thiamine) as seen in beriberi and in Wernicke–Korsakoff syndrome,[33] or vitamin E deficiency.[21]

Cerebellar atrophy has been observed in many other neurological disorders including Huntington's disease, multiple sclerosis,[16] essential tremor, progressive myoclonus epilepsy, and Niemann–Pick disease. Cerebellar atrophy can also occur as a result of exposure to toxins including heavy metals or pharmaceutical or recreational drugs.[21]

There is a general consensus that the cerebellum is involved in pain processing.[34][35] The cerebellum receives pain input from both descending cortico-cerebellar pathways and ascending spino-cerebellar pathways, through the pontine nuclei and inferior olives. Some of this information is transferred to the motor system inducing a conscious motor avoidance of pain, graded according to pain intensity.

These direct pain inputs, as well as indirect inputs, are thought to induce long-term pain avoidance behavior that results in chronic posture changes and consequently, in functional and anatomical remodeling of vestibular and proprioceptive nuclei. As a result, chronic neuropathic pain can induce macroscopic anatomical remodeling of the hindbrain, including the cerebellum.[36] The magnitude of this remodeling and the induction of neuron progenitor markers suggest the contribution of adult neurogenesis to these changes.