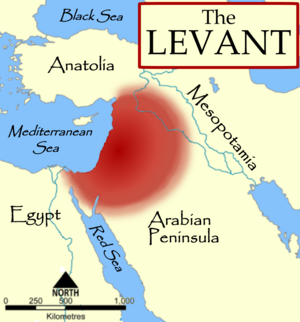 بالحكم من أريان و The Anabasis of Alexander، مؤرخي الإسكندر الأكبر، as well as more ancient authors,[4] gave the name of Syria to all the country comprehended between the Tigris and the Mediterranean. The part to the east of the Euphrates, afterwards named Mesopotamia was called "Syria between the rivers;" that to the west was called by the general name Coele-Syria, and although Phoenicia and Palestine were sometimes separated from it. Yet, it was often comprehended as the whole country as far as Egypt.[5][6]

في حروب الديادوخي، Coele-Syria came under the control of أنتيگون الأول الأعور. Then in 301 ق.م.، Ptolemy I Soter exploited events surrounding the Battle of Ipsus to take control of the region. The victors at Ipsus finalized the breakup of Alexander's empire. Coele-Syria was allocated to Ptolemy's former ally Seleucus I Nicator, who—having been previously aided by Ptolemy—took no military action to gain control of the region. Their successors, however, became embroiled in a series of conflicts over this issue.[10]

Ptolemy, marching on Pelusium, made his first halt at that city, and after picking up stragglers and serving out rations to his men moved on marching through the desert and skirting Mount Casius and the marshes called Barathra. Reaching the spot he was bound for on the fifth day he encamped at a distance of fifty stades from Raphia, (رفح الحالية على الحدود المصرية الفلسطينية، شمال Rhinocolara (العريش)) which is the first city of Coele-Syria on the Egyptian side after Rhinocolura.[12][13]

Having spoken of the three boundaries of Egypt, by which it is distinguished from the rest of the continent, we now proceed to the next. The fourth side is nearly surrounded with a vast sea, without any harbours, being a very long and tedious voyage, and very difficult to find any place of landing. For from Parcetonium in Africa, to Joppa in Cœlo-Syria, for the space almost of five thousand furlongs, there is not one safe harbour to be found, except Pharus.[17]

Authors of the Roman period differ on the limits of Coele-Syria, some extending and others contracting them. The Geography of Strabo notes that Coele Syria Propria (Proper) is defined by the Libanus and Anti-libanus mountain ranges, running parallel to each other.[21] In the wars between the Ptolemies and the Seleucidæ, the name Cœle (or Hollow Syria) was applied to the whole of the southern portion of Syria, but under the Romans, it was confined to "Cœlesyria Proper" and variously included the district east of Anti-Libanus, about Damascus, and a portion of Palestine east of the Jordan river (possibly of: Trans-Jordan, Perea، أو ديكاپولس).[22]

The name Syria comes from the ancient Greek regional name for the Levantine colonies and colonial territories which they had established and which were "formerly comprehended as part of Assyria" (see Name of Syria).[27] Syria had an uncertain border to the northeast that Pliny the Elder describes as including from west to east; Commagene, Sophene, and Adiabene. In Pliny's time, Syria was administratively divided into a number of provinces with various degrees of autonomy under the Roman Empire, such as the Ityraei or Ituraei, who were a people of Coelo-Syria famous for shooting with a bow, [The wood of the trees called] "yews are bent into Ituraean bows".[28][29]

The ديكاپولس was so called from its ten cities enumerated by Pliny. And it should be noted, that what Pliny calls ديكاپولس, Ptolomy makes his Cœle-Syria; and the Cœle-Syria of Pliny, is that part of Syria about Aleppo.[39][40]

The governor of Syria retained the civil administration of the whole large province undiminished, and held for long alone in all Asia a command of the first rank. It was only in the course of the second century that a diminution of his prerogatives occurred, when Hadrian took one of the four legions from the governor of Syria and handed it over to the governor of Palestine. It was Severus who at length withdrew the first place in the Roman military hierarchy from the Syrian governor. After having subdued the province —which had wished at that time to make Niger emperor, as it had formerly done with its governor Vespasian —amidst resistance from the capital Antioch in particular, he ordained its partition into a northern and a southern half, and gave to the governor of the former, which was called Coele-Syria, two legions, to the governor of the latter, the province of Syro-Phoenicia, one [legion].[44]

There is also the colony of Laodicea, in Coele Syria, to which also the divine Severus granted the Italian Law on account of its services in the Civil War.[48]