الزهد (بالإنگليزية: Asceticism، /əˈsɛtɪsɪzəm/; من باليونانية: ἄσκησις) is a lifestyle characterized by abstinence from sensual pleasures, often for the purpose of pursuing spiritual goals.[3] Ascetics may withdraw from the world for their practices or continue to be part of their society, but typically adopt a frugal lifestyle, characterised by the renunciation of material possessions and physical pleasures, and also spend time fasting while concentrating on the practice of religion or reflection upon spiritual matters.[4] Various individuals have also attempted an ascetic lifestyle to free themselves from addictions, some of them particular to modern life, such as alcohol, tobacco, drugs, entertainment, sex, food, etc.[5][بحاجة لمصدر] 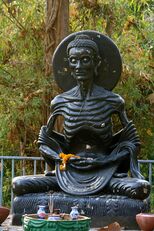 Asceticism has been historically observed in many religious traditions, including Buddhism, Jainism, Hinduism, Islam, Christianity, Judaism and Pythagoreanism and contemporary practices continue amongst some religious followers.[6]

The practitioners of this philosophy abandon sensual pleasures and lead an abstinent lifestyle, in the pursuit of redemption,[7] salvation or spirituality.[8] Many ascetics believe the action of purifying the body helps to purify the soul, and thus obtain a greater connection with the Divine or find inner peace. This may take the form of rituals, the renunciation of pleasure, or self-mortification. However, ascetics maintain that self-imposed constraints bring them greater freedom in various areas of their lives, such as increased clarity of thought and the ability to resist potentially destructive temptations. Asceticism is seen in the ancient theologies as a journey towards spiritual transformation, where the simple is sufficient, the bliss is within, the frugal is plenty.[4] Inversely, several ancient religious traditions, such as Zoroastrianism, Ancient Egyptian religion,[9] and the Dionysian Mysteries, as well as more modern Left Hand traditions, openly reject ascetic practices and either focus on various types of hedonism or on the importance of family life, both rejecting celibacy.