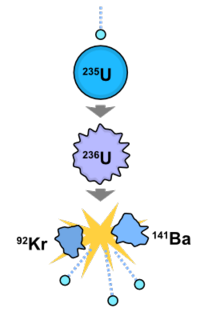 An induced fission reaction. A neutron is absorbed by a uranium-235 nucleus, turning it briefly into an excited uranium-236 nucleus, with the excitation energy provided by the kinetic energy of the neutron plus the forces that bind the neutron. The uranium-236, in turn, splits into fast-moving lighter elements (fission products) and releases three free neutrons. At the same time, one or more "prompt gamma rays" (not shown) are produced, as well.

A visual representation of an induced nuclear fission event where a slow-moving neutron is absorbed by the nucleus of a uranium-235 atom, which fissions into two fast-moving lighter elements (fission products) and additional neutrons. Most of the energy released is in the form of the kinetic velocities of the fission products and the neutrons.
Fission product yields by mass for thermal neutron fission of U-235, Pu-239, a combination of the two typical of current nuclear power reactors, and U-233 used in the thorium cycle.

A schematic nuclear fission chain reaction. 1. A uranium-235 atom absorbs a neutron and fissions into two new atoms (fission fragments), releasing three new neutrons and some binding energy. 2. One of those neutrons is absorbed by an atom of uranium-238 and does not continue the reaction. Another neutron is simply lost and does not collide with anything, also not continuing the reaction. However, one neutron does collide with an atom of uranium-235, which then fissions and releases two neutrons and some binding energy. 3. Both of those neutrons collide with uranium-235 atoms, each of which fissions and releases between one and three neutrons, which can then continue the reaction.
المقالة الرئيسية: Nuclear chain reaction

قالب:Nuclear and radiation accidents and incidents