السيينيت (بالإنگليزية: Syenite)، is a coarse-grained intrusive igneous rock with a general composition similar to that of granite, but deficient in quartz, which, if present at all, occurs in relatively small concentrations (< 5%). Some syenites contain larger proportions of mafic components and smaller amounts of felsic material than most granites; those are classed as being of intermediate composition. The volcanic equivalent of syenite is trachyte.[1] 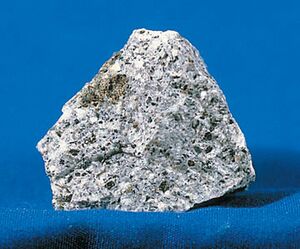 QAPF diagram that shows the quartz (Q), alkali feldspar (A), and plagioclase (P) composition of syenite 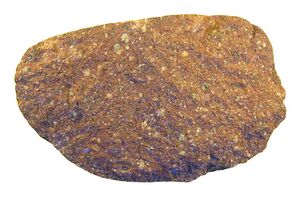 The feldspar component of syenite is predominantly alkaline in character (usually orthoclase). Plagioclase feldspars may be present in small proportions, less than 10%. Such feldspars often are interleaved as perthitic components of the rock.

When ferromagnesian minerals are present in syenite at all, they usually occur in the form of hornblende, amphibole and clinopyroxene. Biotite is rare, because in a syenite magma the formation of feldspar consumes nearly all the aluminium. However less Al-rich phyllosilicates may be included, such as annite.

Other common accessory minerals are apatite, titanite, zircon and opaques.

Syenites are products of alkaline igneous activity, generally formed in thick continental crustal areas, or in Cordilleran subduction zones. To produce a syenite, it is necessary to melt a granitic or igneous protolith to a fairly low degree of partial melting. This is required because potassium is an incompatible element and tends to enter a melt first, whereas higher degrees of partial melting will liberate more calcium and sodium, which produce plagioclase, and hence a granite, adamellite or tonalite.

At very low degrees of partial melting a silica undersaturated melt is produced, forming a nepheline syenite, where orthoclase is replaced by a feldspathoid such as leucite, nepheline or analcime.

Conversely in certain conditions, large volumes of anorthite crystals may precipitate from thoroughly molten magma in a cumulate process as it cools. This leaves a drastically reduced concentration of silica in the remainder of the melt. The segregation of the silica from the melt leaves it in a state that may favour syenite formation.

Syenite is not a common rock. Regions where it occurs in significant quantities include the following.

The term syenite was originally applied to hornblende granite like that of Syene (now Aswan) in Egypt, from which the name is derived.

Episyenite (or epi-syenite) is a term used in petrology to describe veins, pods, or lenses of rock originally rich in silicon dioxide (SiO2) from which quartz has been severely depleted.[8] This is often accompanied by strong enrichment in potassium and rare earth elements, leaving the altered rock a distinctive brick red color,[9] or by albitization (enrichment in sodium), leaving the altered rock a conspicuous white color.[10]

Episyenites are heterogenous in their properties, but all have experienced nearly complete disappearance of quartz at sub-solidus temperatures; that is, at temperatures below the melting point of the host rock. The formation of episyenites (episyenitization) typically takes place through leaching of quartz by mildly saline hydrothermal fluids, typically near a cooling intrusion. Because episyenitization usually takes place in granitoid rock and usually involves alkaline metasomatism (addition of alkali metal oxides to the rock) the result is a rock that has the mineral composition of an igneous syenite.[10]

In addition to rare earth elements,[9] episyenites may be important sources of uranium[11] and other valuable metals.[10]

Notable occurrences of episyenite are found in the Central Iberian Massif of Spain,[8] in Cambrian to Ordovician beds of New Mexico and Colorado,[9] Scandinavia, Brazil, and Ukraine.[10]