Newark Bay is a tidal bay at the confluence of the Passaic and Hackensack Rivers in northeastern New Jersey. It is home to the Port Newark-Elizabeth Marine Terminal, the largest container shipping facility in Port of New York and New Jersey, the third largest and one of the busiest in the الولايات المتحدة. An estuary, it is periodically dredged to accommodate ocean-going ships. 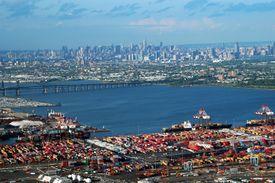 Port Newark is seen in the foreground looking northeast across the bay to Jersey City and the Manhattan borough of New York City. 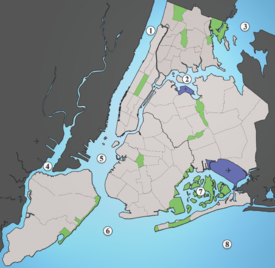 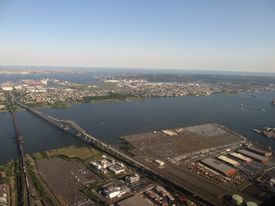 Newark Bay is rectangular, approximately 5.5 ميلs (8.9 kم) long, varying in width from 0.6 to 1.2 ميلs (0.97 to 1.93 kم).[1] It is enclosed on the west by the cities of Newark and Elizabeth, and on the east by Jersey City and Bayonne. At the south is Staten Island, New York and at the north Kearny Point and Droyer's Point mark the mouth of the Hackensack. Shooters Island is a bird sanctuary where the borders of Staten Island, Bayonne and Elizabeth meet at one point.[2] The southern tip of Bergen Neck, known as Bergen Point, juts into the bay and lent its name to the former Bergen Point Lighthouse. Built offshore in 1849 it was demolished and replaced with a skeletal tower in the mid 20th century.[3]

The Atlantic Ocean at Sandy Hook and Rockaway Point is approximately 11 ميلs (18 kم) away and reached by tidal straits dredged to maintain shipping lanes. Newark Bay is connected to Upper New York Bay by the Kill Van Kull and to Raritan Bay by the Arthur Kill. The names of the channels reflect the period of Dutch colonialization. The area around the bay was called Achter Kol, which translates as behind or beyond the ridge and refers to Bergen Hill. The emergence of the Hudson Palisades begins on Bergen Neck, the peninsula between the bay and the Hudson River. Kill in Dutch means stream or channel. During the British colonial era the bay was known as Cull bay.[4] Kill van Kull literally translates as channel from the ridge. Arthur Kill is an anglicisation of achter kill meaning back channel, which would speak to its location behind Staten Island.