On boats and ships, keel can refer to either of two parts: a structural element that sometimes resembles a fin and protrudes below a boat along the central line, or a hydrodynamic element. These parts overlap. As the laying down of the keel is the initial step in the construction of a ship, in British and American shipbuilding traditions the construction is dated from this event. Only the ship's launching is considered more significant in its creation. 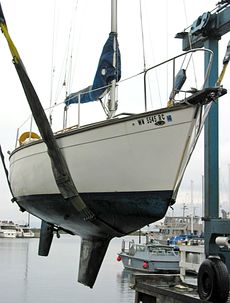 Sailing yacht with a fin keel 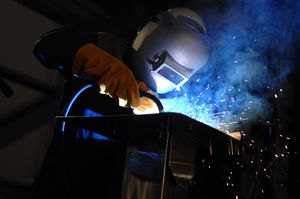 The initials of Susan Ford Bales being welded into the keel of the aircraft carrier USS Gerald R. Ford (CVN 78) during a keel laying and authentication ceremony at Northrop Grumman Shipbuilding in Newport News.

The word can also be used as a synecdoche to refer to a complete boat, such as a keelboat.

Keel laid for the يوإس‌إس United States in drydock

A structural keel is the bottom-most structural member around which the hull of a ship is built. The keel runs along the centerline of the ship, from the bow to the stern. The keel is often the first part of a ship's hull to be constructed, and laying the keel, or placing the keel in the cradle in which the ship will be built may mark the start time of its construction. Large, modern ships are now often built in a series of pre-fabricated, complete hull sections rather than being built around a single keel, so shipbuilding process commences with cutting the first sheet of steel.

The most common type of keel is the "flat plate keel", and this is fitted in the majority of ocean-going ships and other vessels. A form of keel found on smaller vessels is the "bar keel", which may be fitted in trawlers, tugs, and smaller ferries. Where grounding is possible, this type of keel is suitable with its massive scantlings, but there is always a problem of the increased draft with no additional cargo capacity. If a double bottom is fitted, the keel is almost inevitably of the flat plate type, bar keels often being associated with open floors, where the plate keel may also be fitted.