Cybele ( /ˈsɪbᵻliː/; Phrygian: Matar Kubileya/Kubeleya "Kubeleyan Mother", perhaps "Mountain Mother"; Lydian Kuvava; باليونانية: Κυβέλη Kybele, Κυβήβη Kybebe, Κύβελις Kybelis) is an Anatolian mother goddess; she may have a possible precursor in the earliest neolithic at Çatalhöyük, where statues of obese women, sometimes sitting, have been found in excavations. She is Phrygia's only known goddess, and was probably its state deity. Her Phrygian cult was adopted and adapted by Greek colonists of Asia Minor and spread to mainland Greece and its more distant western colonies around the 6th century BC. 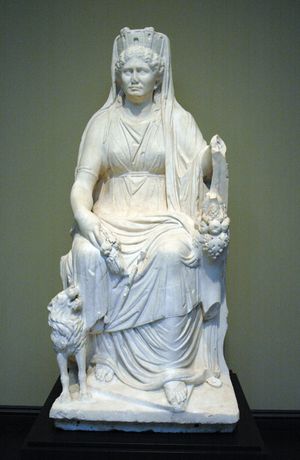 In Greece, Cybele met with a mixed reception. She was partially assimilated to aspects of the Earth-goddess Gaia, her Minoan equivalent Rhea, and the harvest–mother goddess Demeter. Some city-states, notably Athens, evoked her as a protector, but her most celebrated Greek rites and processions show her as an essentially foreign, exotic mystery-goddess who arrives in a lion-drawn chariot to the accompaniment of wild music, wine, and a disorderly, ecstatic following. Uniquely in Greek religion, she had a eunuch mendicant priesthood.[1] Many of her Greek cults included rites to a divine Phrygian castrate shepherd-consort Attis, who was probably a Greek invention. In Greece, Cybele is associated with mountains, town and city walls, fertile nature, and wild animals, especially lions.

In Rome, Cybele was known as Magna Mater ("Great Mother"). The Roman state adopted and developed a particular form of her cult after the Sibylline oracle recommended her conscription as a key religious component in Rome's second war against Carthage. Roman mythographers reinvented her as a Trojan goddess, and thus an ancestral goddess of the Roman people by way of the Trojan prince Aeneas. With Rome's eventual hegemony over the Mediterranean world, Romanized forms of Cybele's cults spread throughout the Roman Empire. The meaning and morality of her cults and priesthoods were topics of debate and dispute in Greek and Roman literature, and remain so in modern scholarship.

Seated Cybele within a naiskos (4th century BC, Ancient Agora Museum, Athens)
Cybele drawn in her chariot by lions towards a votive sacrifice (right). Above are the Sun God and heavenly objects. Plaque from Ai Khanoum, Bactria (Afghanistan), 2nd century BC

Cybele's major mythographic narratives attach to her relationship with Attis, who is described by ancient Greek and Roman sources and cults as her youthful consort, and as a Phrygian deity. In Phrygia, "Attis" was both a commonplace and priestly name, found alike in casual graffiti, the dedications of personal monuments and several of Cybele's Phrygian shrines and monuments. His divinity may therefore have begun as a Greek invention based on what was known of Cybele's Phrygian cult.[2] His earliest certain image as deity appears on a 4th-century BC Greek stele from Piraeus, near Athens. It shows him as the Hellenised stereotype of a rustic, eastern barbarian; he sits at ease, sporting the Phrygian cap and shepherd's crook of his later Greek and Roman cults. Before him stands a Phrygian goddess (identified by the inscription as Agdistis) who carries a tympanon in her left hand. With her right, she hands him a jug, as if to welcome him into her cult with a share of her own libation.[3] Later images of Attis show him as a shepherd, in similar relaxed attitudes, holding or playing the syrinx (panpipes).[4] In Demosthenes' On the Crown (330 BC), attes is "a ritual cry shouted by followers of mystic rites".[5]

Votive altar inscribed to Mater Deum, the Mother of the Gods, from southern Gaul[6]

Romans knew Cybele as Magna Mater ("Great Mother"), or as Magna Mater deorum Idaea ("great Idaean mother of the gods"), equivalent to the Greek title Meter Theon Idaia ("Mother of the Gods, from Mount Ida"). Rome officially adopted her cult during the Second Punic War (218 to 201 BC), after dire prodigies, including a meteor shower, a failed harvest and famine, seemed to warn of Rome's imminent defeat. The Roman Senate and its religious advisers consulted the Sibylline oracle and decided that Carthage might be defeated if Rome imported the Magna Mater ("Great Mother") of Phrygian Pessinos.[7] As this cult object belonged to a Roman ally, the Kingdom of Pergamum, the Roman Senate sent ambassadors to seek the king's consent; en route, a consultation with the Greek oracle at Delphi confirmed that the goddess should be brought to Rome.[8] The goddess arrived in Rome in the form of Pessinos' black meteoric stone. Roman legend connects this voyage, or its end, to the matron Claudia Quinta, who was accused of inchastity but proved her innocence with a miraculous feat on behalf of the goddess. Publius Cornelius Scipio Nasica, supposedly the "best man" in Rome, was chosen to meet the goddess at Ostia; and Rome's most virtuous matrons (including Claudia Quinta) conducted her to the temple of Victoria, to await the completion of her temple on the Palatine Hill. Pessinos' stone was later used as the face of the goddess' statue.[9] In due course, the famine ended and Hannibal was defeated.

Most modern scholarship agrees that Cybele's consort (Attis) and her eunuch Phrygian priests (Galli) would have arrived with the goddess, along with at least some of the wild, ecstatic features of her Greek and Phrygian cults. The histories of her arrival deal with the piety, purity and status of the Romans involved, the success of their religious stratagem, and power of the goddess herself; she has no consort or priesthood, and seems fully Romanised from the first.[10] Some modern scholars assume that Attis must have followed much later; or that the Galli, described in later sources as shockingly effeminate and flamboyantly "unRoman", must have been an unexpected consequence of bringing the goddess in blind obedience to the Sibyl; a case of "biting off more than one can chew".[11] Others note that Rome was well versed in the adoption (or sometimes, the "calling forth", or seizure) of foreign deities,[12] and the diplomats who negotiated Cybele's move to Rome would have been well-educated, and well-informed.[13] Romans believed that Cybele, considered a Phrygian outsider even within her Greek cults, was the mother-goddess of ancient Troy (Ilium). Some of Rome's leading patrician families claimed Trojan ancestry; so the "return" of the Mother of all Gods to her once-exiled people would have been particularly welcome, even if her spouse and priesthood were not; its accomplishment would have reflected well on the principals involved and, in turn, on their descendants.[14] The upper classes who sponsored the Magna Mater's festivals delegated their organisation to the plebeian aediles, and honoured her and each other with lavish, private festival banquets from which her Galli would have been conspicuously absent.[15] The goddess herself was contained within her Palatine precinct, along with her priesthood, at the geographical heart of Rome's most ancient religious traditions.[16] She was promoted as patrician property; a Roman matron – albeit a strange one, "with a stone for a face" – who acted for the clear benefit of the Roman state.[17][18]

1st century BC marble statue of Cybele from Formia, Lazio

المقالة الرئيسية: Megalesia
Illustration of the month of April based on the Calendar of Filocalus (354 AD), perhaps either a Gallus or a theatrical performer for the Megalesia[19]

Eroded inscription from Lugdunum (modern Lyon, in France) commemorating a taurobolium for the Mother of the Gods under the title Augusta[20]

Cybele's major myths deal with her own origins, and her relationship with Attis. The most complex, vividly detailed and lurid accounts of this myth were produced as anti-pagan polemic in the late 4th century, by the Christian apologist Arnobius.[21]